Why write new stuff when the old stuff still applies? Change the names of the politicians and this 1996 editorial on gas prices seems awfully current. But the fumes of technocracy do linger on in this line, from the WaPost story on Kerry's energy plan: "Kerry would temporarily suspend filling the reserve until 'oil prices return to normal levels,' it states." What will Kerry do about the prices of T-shirts? Computers? Shampoo? Diet Coke? (I buy a lot more Diet Coke than gasoline, and I want those loss-leader specials back.)

Energy economist Lynne Kiesling is all over the media's favorite factoid. She also has good news about Monty Python's Life of Brian.

After a week in L.A., with a car for a few trips downtown, I'm starting to feel pretty friendly toward high gas prices. Having to pay more than $2 a gallon does wonders for the traffic (but then I walk most places I need to go).

"THE KILLERS WERE NOT MISTAKEN IN THEIR TARGET"

Mario Vargas Llosa writes on Madrid in The Guardian

Madrid's modernity is not only in its buildings, new developments, infernal traffic jams, proliferating fast food outlets, the piebald invasion of tourists, or the alert ear that can, in the queues at the Prado or at night around the Plaza Mayor, hear all the languages in the world. It is in the mental cosmopolitanism of its people who, in their diversity, have grown emancipated from the stigma of a "municipal" Madrilenian identity (as Ruben Dario would say) and who, like the people of London, Paris or New York, have become citizens of the world. Thus, in an exhibition at the Galeria Moriarty, the Japanese photographer Atsuko Arai a couple of years ago could show how, without leaving the historic centre of town, the capital of Spain was a microcosm harbouring the landscapes and cultures of half the planet.

It has been this free spirit and this unblinkered mentality of an open city, hospitable and democratic, the emblem city of a remarkable transformation of Spain in the last quarter-century, that the fanatics sought to destroy, on the morning of March 11, when they placed in Atocha the bombs that have left more than 200 dead and 1,500 wounded - 12 nationalities, typically enough, being represented among the victims - in the most ferocious terrorist massacre suffered in Western Europe in modern history.

The killers were not mistaken in their target: today's Madrid represents precisely the negation of the radical inhumanity of the obtuse, exclusive tribal spirit of fundamentalism, religious or political, which hates mixture, diversity and tolerance and, above all, liberty. This is the first European battle in a savage war that began exactly two years ago with the destruction of the Twin Towers in New York, and whose inroads will probably fill with blood and horror a good part of this new century. It is a war to the death, of course, and owing to the present fantastic development of the technology of destruction and the fanatic, suicidal zeal that inspires the international movement of terror, it is perhaps a trial even more difficult than those represented by fascism and communism for the culture of liberty.

Vargas Llosa goes on to discuss the likely policies of the Zapatero government and their implications. Read the whole thing. (Thanks to Xavier Lewis, who posted a note about this article on the Dynamist listserve.)

HAVE JAPANESE HOUSEWIVES ENDED THEIR STRIKE?

The NYT reports that Japanese household spending is up for the fourth month in a row. My friend Grant McCracken, a very smart cultural anthropologist, suggests that perhaps Japanese housewives are ending a de facto strike for better treatment. After spending three days at a Liberty Fund conference with Tyler Cowen and me, Grant recently resumed his Culture by Commotion blog. 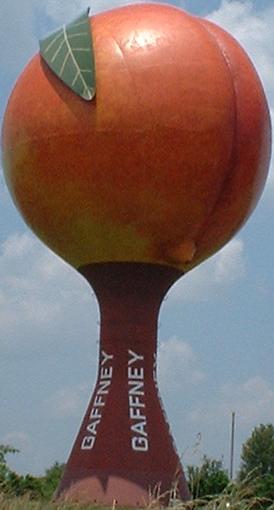 Aside from stealing textile jobs from Queens, it's most famous for this I-85 landmark.

Despite the occasional balancing point, this NYT feature hews to a standard narrative: technological progress plus geographical mobility equals cultural loss. In this case, the product is luxury fabric and old-fashioned looms in Queens are being replaced by computerized looms in some place called South Carolina, where workers make ridiculously low pay.

The Jacquard looms in the Scalamandre mill, though fully mechanized, made only 2 to 20 yards a day, depending on the complexity of the fabric, and still needed a lot of personal attention. Computerized looms, by comparison, will make 20 to 100 yards a day. The newer machines will each, on average, do the work of six iron-and-wood looms, minus the balletic grace....

According to Mrs. Bitter, it takes 6 to 10 years to train an expert weaver, who can earn up to $17 an hour, said Luis Ginorio, a representative of Unite, the union at the mill; the average worker, he said, might make $10 to $11 an hour. In South Carolina, he added, the average wage might be $7 or $8 an hour.

The NYT doesn't specify the city--Who could possibly care?--but chances are $7 an hour buys a much better lifestyle in South Carolina than $10 an hour buys in Queens. The article is worth reading, both for its information and its stereotypical narrative, and the website has a cool slide show that captures the romance of old industry.

For the other side of the story, here's the Greenville News account:

A high-end textile manufacturer is relocating much of its manufacturing operations to Gaffney, with plans to employ 90 people and invest $7.5 million.

That's good news for a county hit with an 8.8 percent unemployment rate in January. That translates to 2,420 people looking for jobs in a labor force of 27,490 people.

Statewide, the textile industry lost 4,100 jobs last year and 28,200 over the past five years.

Scalamandre, which sells its fabric for up to $2,000 a yard, plans to close its plant in Queens, N.Y., where it has been since 1929. It will phase out the New York operations by late spring, moving its weaving, dying and finishing operations to the Upstate.

Mark Bitter, chief executive officer and the grandson of the company founder, said the move will allow the company to triple its production and cut costs by 40 percent.

But you have much more powerful newspapers (with better writers) in New York.

Remember when putting troops on the ground in Afghanistan was a sure ticket to disaster, a military action hardly more conceivable than launching a nuclear attack? Remember the lessons of the Soviets and the British? Judging from this week's discussions, not many people do.

I'm in L.A. to attend NeoCon® West 2004, a gathering that has nothing to do with Irving Kristol or Leo Strauss.

Has the quality of public school teachers really fallen over the past generation and, if so, why? My latest NYT column looks at recent research that finds some surprising answers.

As a side note, one of the frustrations of writing a popular column on economics is that I tend to emphasize the results--what the research concludes--rather than the meticulous techniques and clever data collection that give work like this its credibility. One sign of a good empirical study is how careful the researchers are about testing and eliminating other possible explanations, including quirks in the data.

I guess I've somehow arrived. An online term paper service is offering a pre-written essay on my Substance of Style speech at the Manhattan Institute.