Is Bloggingheads Worth It Cont'd 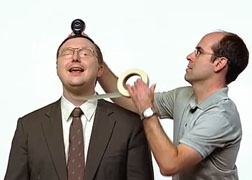 Thanks to the many readers who responded to my post about Bloggingheads. Here are a few sample responses.

On his blog, Jim Hu says no, or maybe hell no. Sample: "I find the whole thing just annoying as hell. I've never actually watched one from start to end, or even from start to middle. I'm not sure why I can't stand Bloggingheads."

Alex Massie, by contrast, likes the format: "It's a fun format--and a welcome alternative to the brain-rotting tedium of the so-called cable news channels. So, I do hope you'll be appearing again."

Ted Frank recommends the addition of transcripts: "Bloggingheads is so not worth the trouble, at least until they come up with automatic-transcription software. I read blogs precisely because I don't find it a productive use of my time to watch clever repartee on tv news shows. The comparative advantage of the blogosphere is quick-reaction-publishing, the ability to go into detail that one can't in the MSM, the ability to digest it a post in one-minute chunks while one is gathering one's thoughts, and the power of computer search engines and RSS feeds to quickly find what you want to read and ignore what you don't want to spend time on. Bloggingheads has none of those advantages. I've almost stopped reading Kaus's blog because there are so many links to bloggingheads that tell me nothing about what I'm going to hear. And I would say this even if it didn't crash my computer a third of the time."

Doug Anderson shares my own preference for audio: "I enjoyed you being on Blogging Heads, although I obviously can't evaluate whether it is worth the trouble. I seldom actually see Blogging Heads (and your episode was no exception) as I listen to the podcasts (which are audio only instead). I download the podcasts via RSS and video is not available this way."

In the end, I wound up deciding not to do any more appearances, at least in the short term, for reasons that have nothing to do with the format. Bloggingheads can't handle Macs. The audio and video get out of sync. I decided that dealing with the technical problems wasn't worth the trouble of anyone involved. There are plenty of interesting PC-using bloggers out there. Check out the latest entries here.