I'm in Florence, home of great art, great food, and poor Internet service. They're still in the Internet cafe stage, with little wi-fi to be found. 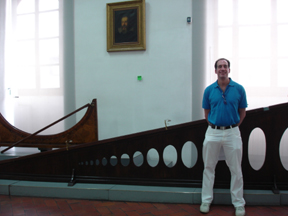 Here is Steve in front of a re-creation of Galileo's inclined plane in the science museum. There are bells along the top, spaced at proportional intervals. As the ball rolls down the incline, it rings the bells, making it possible to time the descent.

We were going to take a photo of me in front of Galileo's actual telescopes, but it turns out you aren't supposed to take pictures, and we were busted--very politetly and apologetically--as I was posing.

The anti-photo policies of museums don't necessarily make sense, except as some kind of revenue enhancer. Prohibiting flash is one thing. And I don't blame the Louvre for blocking photos in the often-crowded Italian painting gallery. But prohibiting all photos in an uncrowded museum filled with works in the public domain is unnecessary--unless you think it will generate sales in the museum store. But the very cool, and virtually empty, science museum, which hardly even has a bookstore, would get more visitors if it let them pose for photos.