Why fashion deserves its place in art museums 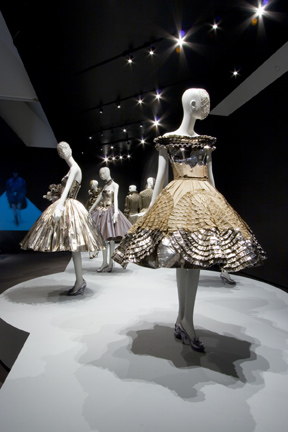 On May 7, the rich, famous, and beautiful will parade into the Metropolitan Museum of Art wearing their best, or most interesting, clothes, pausing for photographers along the obligatory red carpet. Once inside, the 700 guests—actors and models, designers and socialites—will dine and dance and preview the museum’s newest exhibition, “Poiret: King of Fashion.” The occasion is the “party of the year,” the Met’s Costume Institute Benefit Gala. Co-chaired annually by Vogue editor in chief Anna Wintour, usually with a movie star (Cate Blanchett this year) and a fashion designer (Nicolas Ghesquière), the party is not just a chance to wear and admire beautiful clothes; it’s a lavish and efficient fund-raising machine. Tickets start at $6,500 per person, with tables for 10 running as high as $100,000. Last year’s gala raised $4.5 million for the museum’s fashion department.

While only the Met commands that sort of glitz, fashion collections throughout the country are enjoying a new prominence. When the Philadelphia Museum of Art opens a new building this spring, its space for costume and textile exhibitions will nearly triple. Boston’s Museum of Fine Arts recently devoted its main special-exhibition gallery to a display of straight-off-the-runway selections from 10 Paris houses, the first costume-department exhibit to occupy that space since 1989. For the first time in its 28-year history, the Museum of Contemporary Art in Los Angeles included fashion in an exhibit, “Skin + Bones,” which examined connections between architecture and clothing design. The Meadows Museum in Dallas is currently featuring a retrospective of Basque-born couturier Cristóbal Balenciaga’s mid-century work, across from galleries devoted to such Spanish masters as Velázquez, El Greco, and Goya.

But despite huge public interest—or perhaps because of it—fashion departments still find themselves constantly required to justify their existence. Dennita Sewell, the Phoenix Art Museum’s curator of fashion design, sputters her frustration with presumably sophisticated New York critics who seem to begin every review of a fashion exhibition not by asking whether the show’s concept is valid or the pieces are good but whether museums should show fashion at all. “Somebody has poured their heart out working on this show, and the first question is ‘Why are you in here?’ Gosh, can we move on from that? It just—I mean, the collection has been here since 1966. Why are we still discussing this?”

The Boston exhibit’s comment book records a debate between fans, mostly women, who praise the museum for displaying an “inspiring” and “seldom seen” art form and detractors, mostly men, who decry its descent into commercialism. “What’s next? Victoria’s Secret’s Xmas Collection?” writes one. “People in the museum world complain that fashion is not art, and they think it is unworthy of being in an art museum,” says Valerie Steele, the director of the Museum at the Fashion Institute of Technology. “Fashion is really seen as the bastard child of capitalism and female vanity.”

Behind the criticism of fashion as an artistic medium is a highly ideological prejudice: against markets, against consumers, against the dynamism of Western commercial society. The debate is not about art but about culture and economics. Critics who decry fashion collections are less troubled by the prescribed costumes of dynastic China or the aristocratic dress of baroque France than by the past century’s clothes. With its fluctuating forms and needless decoration, fashion epitomizes the supposedly unproductive waste that inspired 20th-century technocrats to dream of central planning. It exists for no good reason. But that’s practically a definition of art.

Prejudice aside, it’s hard to come up with objections to fashion collections that don’t apply to other museum departments. Fashion is mass produced? So are prints and posters, often more so than haute couture. Ephemeral? So are works on paper. Utilitarian? So are pots and vases. Customized to an individual? So were suits of armor. As for the fickle­ness of fashion, the history of Western art is a story of changing styles. And however much critics may despise commerce, many undisputed masterpieces were works for hire. “Paintings were marketable goods which competed for the attention of the purchaser,” writes the historian Michael North in Art and Commerce in the Dutch Golden Age. Michelangelo and Ghiberti got paid.

The real question is not whether museums are too good for fashion but whether they’re good enough. Clothes are unique sculptures, dependent on a supporting human form and created to move. Yet museum mannequins stand still. Clothing is made to be seen and touched—the tactile qualities of fabric are as essential to the art as a garment’s color or shape—but light and fingertips dim colors and degrade fabrics. The first rule of fashion exhibitions is Do not touch.

Any fashion exhibition is thus a compromise. But, of course, altarpieces weren’t meant to be ripped from their candlelit sacred context and put up on museum walls to be admired by non­believers. The Elgin Marbles were supposed to be on the Parthenon. For many works of art, a museum is an artificial setting— a zoo, not a natural habitat. Some zoos, however, are worse than others.

Take the Costume Institute’s perma­nent galleries in the basement of the Met, where garments are displayed in dimly lit glass cases lining the walls. Visitors can see each object only from a single angle. But clothes, like sculpture, are three-dimensional art. An evening gown’s plunging back may contrast with a modest front—think of Hilary Swank’s dress at the 2005 Oscars—but you can’t appreciate the relationship if you can see only one side. No wonder the recent exhibition of the late socialite Nan Kempner’s extraordinary wardrobe seemed less like an art retrospective than a series of crowded shop windows, a tribute less to Yves Saint Laurent’s or Madame Grès’ work than to Kempner’s buying power.

Elsewhere curators have mostly dispensed with the glass, relying on decorum and guards to keep corrosive fingers off the clothes. The result is a much fuller experience of the art. “If it is lit well, you can really see the details, and you can see the surface and hand of the fabric,” says Steele. No photograph can adequately convey the cascades of seemingly weightless pinked ruffles and the precise yet delicate pleats of the Ro­darte evening gown on display in Phoenix. Like an impressionist painting, it has to be seen firsthand.

The best of fashion, like the best of fine art, offers not only nuance to the connoisseur but also immediate pleasure to the uninitiated. The familiarity of clothes makes fashion exhibits accessible, but that very familiarity also highlights the difference between daily dress and museum-quality garments. “At the time when people are getting fatter and dressing more casually than ever before—jeans at the opera!—there is an increase in interest in very fashionable dress,” notes Sewell, the Phoenix curator.

The challenge for fashion curators is to balance aesthetics and history, pleasure and meaning. The Met’s 2001 exhibit of Jackie Kennedy’s White House wardrobe was wildly popular, but it made little sense in a museum dedicated to aesthetic masterworks. Kennedy’s clothes were derivative of French fashions, interesting for what they reveal about the first lady’s self-conscious image-building but not for any fashion innovation. They belonged in a history museum.

If museums treat fashion purely as art for art’s sake, however, they risk draining the medium of what makes it distinctive and meaningful—not only its aesthetic elements but its connection to history and the human body. Fashion is, as Steele has insisted since she was a Yale doctoral student, a part of cultural history, and the relationship goes both ways. No history of business or chemistry explains the appeal of aniline dyes as powerfully as coming upon the 1860 purple-and-black striped dress in FIT’s current exhibition on color in fashion. (One of FIT’s two exhibitions is always historical, for the benefit of fashion students.)

Three years ago, the Met’s “Dangerous Liaisons” exhibit showcased 18th-century costumes in the museum’s period rooms, creating dramatic vignettes of mannequins socializing in naturalistic poses. The clothes were not only beautiful but, shown in their physical and social context, culturally understandable despite their extreme artifice. The clothes, furniture, and interior design became not just displays of luxury and handcraft but tools for seduction and self-expression, relating the unfamiliar setting to universal human behaviors. Emphasizing romantic intrigue, says Harold Koda, the Costume Institute’s curator in charge, “is a way in which one can get a contemporary audience to look at 18th-century dress that doesn’t look like Cinderella.”

Great fashion, like any museum-worthy art, is both timeless and time-bound, recalling the tension between the classic claims of art and the work’s origin in a specific time and place. As Steele says: “We are trying to convey the story of fashion, the appeal of fashion, the experience of fashion. Fashion is about change. It is about changing silhouettes, and it is about new ways of presenting yourself to the world.” It is, in short, an ideal art form for modern times.