How the Easter Bunny Got So Soft 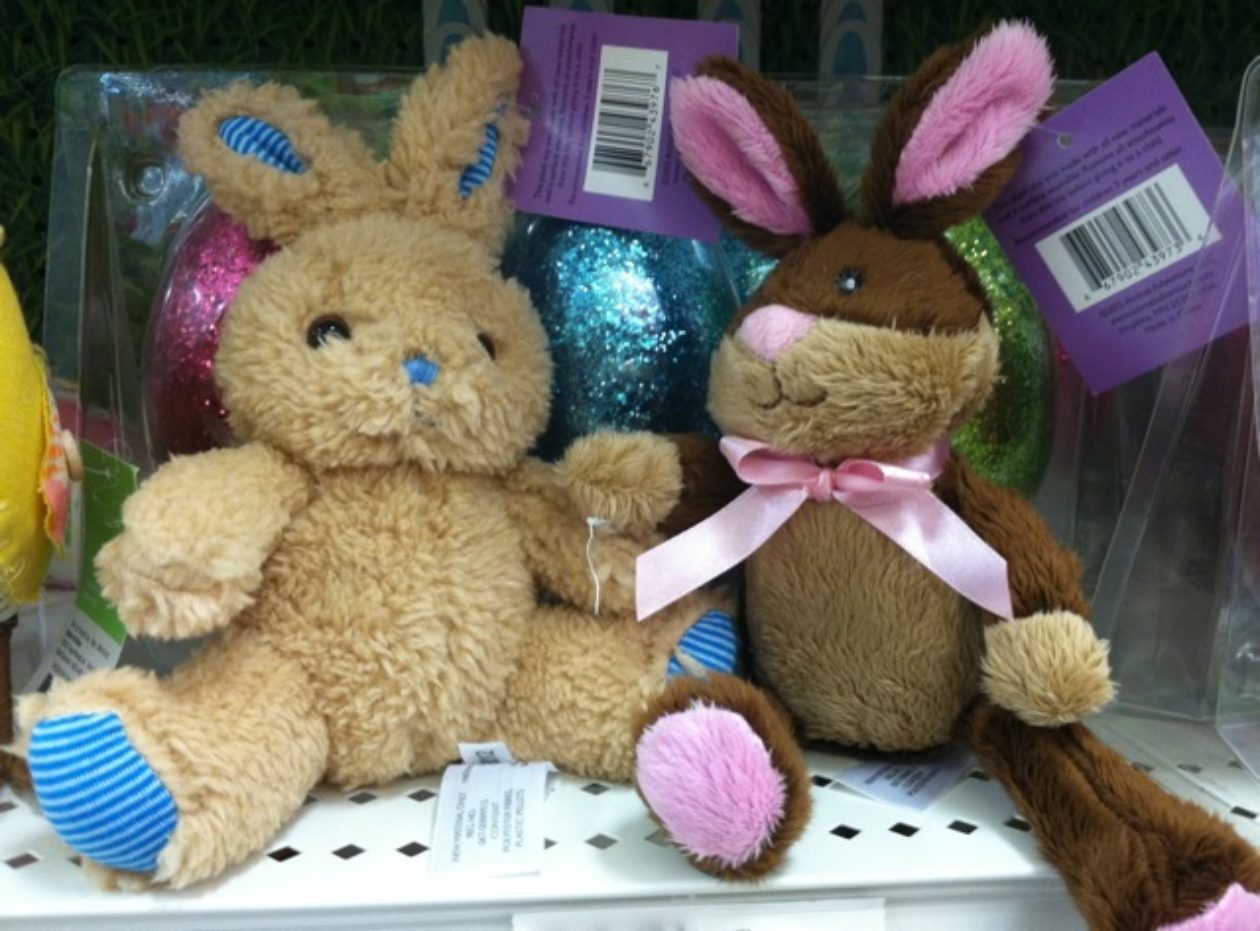 Easter bunnies aren’t what they used to be.

The plush toys that line store shelves this time of year are cheaper, often safer, and much, much softer than in bygone days. They represent a small, squishy example of a pervasive phenomenon: goods whose quality has improved gradually but significantly over time, without corresponding price increases and with little recognition in the public imagination.

Let's start with price: If you shop around, you can find a stuffed Easter bunny for three dollars. You could in the 1970s, and you can today.

My neighborhood Target is selling two models at that price -- one a gangly-legged anthropomorphic fellow with a ribbon bowtie and the other shaped like a classic teddy bear with long rabbit ears. At $2.99, they're the cheapest in a lineup of plush Easter toys that includes offerings for $4.99, $9.99 and $19.99 (a child-sized giant rabbit). Back in 1970, when I myself was young enough for Easter baskets, Walgreens advertised "plush bunnies in ‘hot’ colors” for $2.97, along with other plush rabbits for $2.19 and $3.77 (and a velvet bunny for $1.39).

The $2.97 bunny from 1970 was probably bigger (the ad doesn't say) than today's $2.99 model, but keep in mind that these prices are not corrected for inflation. The 1970 bunny would cost $17.97 in today’s dollars. Or to use another benchmark, the federal minimum wage in 1970 was $1.45 -- about half the price of one of those Walgreens bunnies -- compared with today’s minimum of $7.25, more than double the price of the Target ones. Earning enough to buy the 1970 bunny required 123 minutes of minimum-wage labor versus about 25 minutes today.

Admittedly, $3 plush rabbits are low-profit items designed to get people in the store and stimulate impulse buying. But the broad pattern applies to more expensive stuffed animals as well: Prices have stayed low.

For that, you can thank intense international competition. Like apparel manufacturing, making plush stuffed animals is a labor-intensive, cut-and-sew process that, beginning with Japan in the 1960s has served as an early stage in economic development for East Asian countries. Stuffed-toy production moved to South Korea in the 1980s, then to Taiwan, “and then from Taiwan to southern China, then from southern China to northern China, and then from northern China to Indonesia, Vietnam and such,” explained Monica Fitzhugh, the California-based director of product development for Aurora World, Inc. (Founded in Seoul, Aurora was an early Korean entrant into the business.)

As with clothes, consumers have come to expect low prices. But inexpensive doesn’t necessarily mean “cheap.” The quality of stuffed toys has also improved, in ways both subtle and readily apparent.

“It’s a better product than it was years ago, and it’s not that much more expensive,” said Steven Meyer, the third-generation owner of Mary Meyer Corp., a toy company based in Vermont. Meyer joined the company in 1986, helping his father weather the tough transition to manufacturing in Korea. (“I grew up literally with a stuffed toy factory in the backyard,” he recalled. “It was 30 feet behind our home.”)

For example, Meyer explained that Korean and Taiwanese toymakers introduced safety procedures, later copied in China, to assure that toddlers’ bedtime companions didn’t contain hidden hazards. “Every one of our toys is put through a metal detector before it goes into a box, and that’s because a little shard of a sewing needle can break off and go into the toy," said Meyer. "We never thought of that when we produced in the United States.”

More immediately apparent is how the toys feel. A stuffed animal that would have delighted a late baby boomer like me now seems rigid and rough. Today’s toys are stuffed with soft, fibrous polyester rather than the foam rubber, sawdust or ground nut shells of the past. That makes them squishier, as do plush outer fabrics that no longer have stiff backings; the yarns are knitted to one another rather than attached to a rigid fabric like a carpet. As a result, said Meyer, “The whole stuffed toy feels softer and slouchier.”

The real magic, however, is in that silky faux fur.

I first noticed it about a dozen years ago, while buying Christmas presents for my nephew, who was then in pre-school. Like my grandmother, my father and me, he has super-sensitive skin that makes him hate clothing tags and scratchy fabrics. When I asked his parents for gift-buying advice, they recommended “soft things.”

Stuffed animals, I soon discovered, had gotten incredibly soft -- as different from the plush toys of my childhood as a sensuous chocolate mousse is from a stale Hostess cupcake or, sticking to textiles, as a wickable polyester workout T-shirt is from a sweat-sticky polyester disco suit. By my shopping trip in the early 2000s, plush animals were silky even compared with the Beanie Babies that were so popular in the 1990s. Today they can be softer still.

The secret to both wickable T-shirts and softer Easter bunnies lies in polyester microfibers. These high-tech textiles have replaced the acrylic and polyester plushes that used to cover stuffed toys as surely as they’ve nudged aside cotton for exercise apparel. They represent a remarkable technical and cultural achievement.

In the immediate post-disco era polyester was the epitome of textile yuckiness -- synonymous with the cheap, uncomfortable and out of style. "Pity poor polyester. People pick on it,” wrote Wall Street Journal reporter Ronald Alsop in a front-page 1982 article chronicling manufacturers’ attempts to rehabilitate the fiber’s image. What brought polyester back into fashion wasn’t marketing but years of innovation, with textile engineers on three continents making extraordinary gains in producing ever-finer fibers.

Textile fibers, including polyester filaments, are measured in decitex or deniers, almost equivalent units unique to the business. For reference: Silk measures about 1.1 to 1.3 decitex, while human hair runs between 30 and 50. A microfiber is defined as anything less than 1 decitex.

Although polyester microfibers date back to Toray Industries Inc.’s development of Ultrasuede in 1970, they have only become widespread in recent years, thanks in part to massive plant investments in China that have swamped the polyester market and driven down prices. Back around the time that I was buying stuffed toys for my nephew, polyester fibers of around 3 decitex still “were considered fine,” said Frank Horn, president of the Fiber Economics Bureau, the statistical collection and publication arm of the American Fiber Manufacturers Association. But over the past decade or so, true microfibers have “become ubiquitous.”

Now, Horn estimated, the average is about 0.5 decitex -- a reduction of about 85 percent -- and some popular microfibers are as fine as 0.3 decitex. The finer the fiber, the softer the final fabric. That’s what makes today’s stuffed animals so extraordinarily silky.

Largely unheralded outside the textile business, this progress didn’t happen in a single technical leap. It was “not one particular technology but many,” explained textile chemist Phil Brown of Clemson University’s materials science and engineering school, in an e-mail. “Some involved changing fiber shape, some involved using chemical treatments to reduce fiber size, some involved new fiber extrusion technologies in which fibers have more than one polymer component.”

Making more delightful children’s toys wasn’t the primary goal of these innovations, of course. The apparel market is much bigger. And there, too, we tend to take low prices and higher quality for granted. A super-soft Easter bunny is a nice reminder that not all technological progress involves programming and pixels. Some of it you can hug next to your face.