Light Until the Wealth of Nations

As Christmas lights go up on homes around the country, you've probably noticed that the displays seem to get more elaborate every year. No longer does decorating a single evergreen in the front yard suffice. Every tree demands its own ropes of light, wrapping trunks as well as branches. Ubiquitous icicle lights drape even the most generic tract home in sparkling abundance. 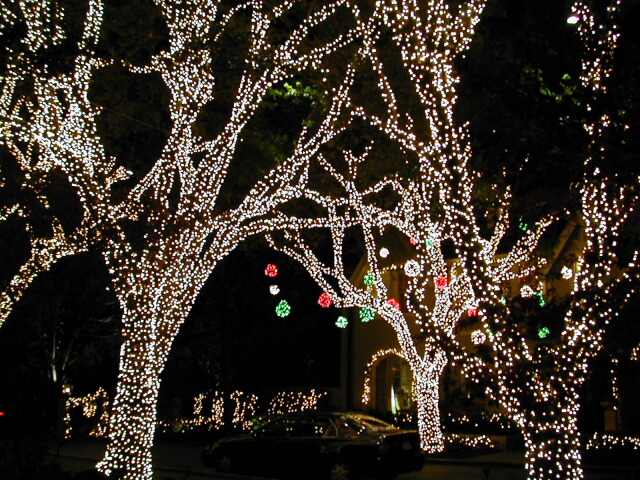 Arbiters of taste may clash over the merits of white versus colored bulbs, and energy Puritans may denounce the inessential use of electricity. But even stylistic snobs can't entirely deny the appeal of a thousand points of holiday light.

Today's lavish displays do more than brighten the night. They tell a story of economic progress. Like the electronic gadgets aimed at gift buyers, the tiny lights outlining rooflines and tree limbs illustrate new sources of growth, productivity, and prosperity. Aesthetic pleasure, they tell us, is an increasingly important source of economic value and hence of new jobs and business opportunities. And the same trends that boost living standards in other areas also make Christmas lights more abundant.

A holiday-lighting dollar simply goes further than it used to. Homeowners buying Christmas lights benefit from the same intense retail and manufacturing competition that have driven down prices and improved reliability in so many other industries, raising the American standard of living.

As a teenager in the mid-1980s, David VanderMolen's job was to buy and install holiday lights for his family's Charlotte, Michigan home. Each year his parents would give him $10, enough for two 35-light strings, each 20 feet long, from Kmart. If the weather wasn't too bad, a string of lights would last about three years. VanderMolen eventually built up a collection of 350 miniature lights, enough to make his house the most elaborately decorated in the neighborhood. 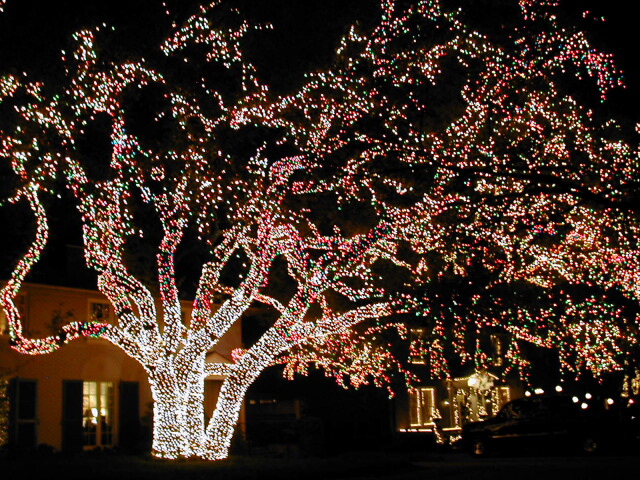 Today, that display would be nothing special. You can buy a 100-light string, nearly 50 feet long, for $2.44 at Wal-Mart. Even without adjusting for inflation, VanderMolen's old $10 annual budget would cover more lights in a single year than he could accumulate over seven years in the 1980s. Today's cheaper lights, mostly made in China, also last longer.

"The stuff now is so well made that you can put it up in November before it gets too cold or wet, and leave it up until a January thaw, and it doesn't all fall apart," says VanderMolen.

As a result, today's homeowners can put on light shows that would have made theme park news a generation ago. Says VanderMolen, "It is easy and inexpensive to put up a tasteful display, and not much more cost or effort to try and humiliate your weak-willed neighbors."

Not everyone wants to climb around on the roof, however, and not everyone has the skills to put together an attractive display. More and more homeowners are contracting out the lighting work, creating satisfying jobs that never existed before. It's part of the long-term trend toward greater and greater specialization. The business also illustrates just how experience improves productivity even in service industries.

Christmas Decor, based in Lubbock, Texas, has more than 350 franchise locations throughout the U.S. and Canada. The company estimates that its franchisees do more than $32 million in holiday light business a year. (At least four other national companies offer similar franchises.) Most franchisees are landscaping companies looking for ways to keep working through the slow winter months. Like the inventory controls that have improved efficiency in manufacturing, adding a holiday lighting service allows landscapers to avoid the boom and bust of hiring and laying off employees.

Franchisers like Christmas Decor give local contractors the benefits of scale-not only buying lights by the container load but learning from experience. Christmas Decor franchisees serve about 300,000 customers each year. "The information you receive from that kind of volume is scientific," says Brandon Stephens, the company's director of marketing. "If there's a problem, it's going to repeat."

If one local contractor figures out a way to save labor, the company incorporates the technique nationwide, changing its vendor specifications if necessary. To make wrapping tree branches more efficient, for instance, Christmas Decor has suppliers deliver lights in balls rather than lined up on cards, the way homeowners shopping at Wal-Mart find them.

People who do the same job over and over again get better and better at it. They hang lights in more consistently attractive patterns. The more people see professional displays, the more they expect to be wowed. Although lighting contractors do some direct marketing, their most effective advertising is the impressively decorated house down the block. Exposure creates demand.

"The more lights that go up, the more lights that go up," says Tom Tolkacz, president of Swingle Tree Co., a Christmas Decor franchisee in Denver. His business has about 70 employees during the holiday season, 20 to 30 more than before Swingle added the lighting franchise. (At its seasonal peak, the landscaping company employs about 200 people.) Its lighting business continued to grow right through the recession, posting some of its greatest gains ever in 2001 and 2002.

Most customers are two-income couples with homes valued at $400,000 or more, says Tolkacz, a "middle market" of people who would not have hired professionals in the past. Some less-affluent single parents also hire the company because they "don't want to get on the roof." The service appeals more to baby boomers than to the over-60 crowd, who tend to believe that hiring someone to install holiday lights is frivolous.

That disparaging attitude toward aesthetics affects us not only as consumers deciding where to spend our money but as citizens trying to understand the sources of future economic growth. We mourn the loss of manufacturing jobs—"real jobs"—and ignore growing aesthetic professions, from installing holiday lights and landscaping lawns to giving manicures and facials, from designing brochures to crafting granite countertops.

Yet in an advanced economy, in which competition is pushing the prices of goods ever lower and their quality ever higher, enhancing the look and feel of people, places, and things will become more and more important over time. Just as surely as the horsepower of a car engine or the warmth of a blanket, the pleasure of twinkling Christmas lights offers real value.

(A shorter version was published as Got a Light? in The Wall Street Journal, December 19, 2003.)