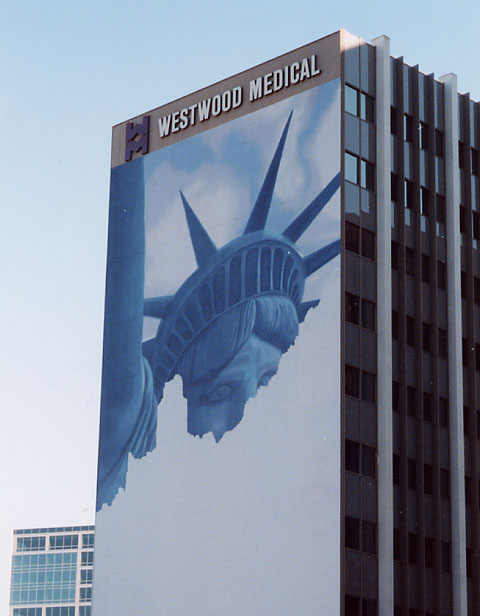 ON A CORNER OF WILSHIRE BOULEVARD, at the edge of Westwood Village below UCLA, rises a strange monument to the tangled relations between art, commerce, regulation and expression in contemporary America.

It is a mural of the Statue of Liberty, painted on the side of a high-rise office building. Or it's at least part of a mural. The lady's face disappears into bare wall on a jagged slant, starting from the middle of her left eye and extending to her right cheek. The space between her head and her torch is also blank, giving the painting an overall effect of having been violently defaced. A single tear, barely visible, trickles down her right cheek.

The tear was a final gesture, says artist Mike McNeilly. He added it as the police were ordering him to stop painting or go to jail. That was in February. McNeilly, who had the building owner's permission to paint the wall, still faces criminal charges for putting up a mural without a permit. And the lady is still missing most of her face.

It's the political side of the trend toward the greater importance of esthetics in American economic and cultural life. (See "Looks matter," FORBES, May 3.) The very power of esthetics encourages people to become absolutists, to insist that other people's stylistic choices, or their tradeoffs between esthetics and other values, constitute a form of pollution.

In Portland, Ore. the city council recently approved new architectural rules. The fronts of all new houses must be at least 15% windows and doors, and the garage can occupy no more than half the facade. The new rules are less stringent than the original proposal, which would have regulated trims, roof pitches and porches.

When local real estate agents criticized the proposed design standards, City Commissioner Charlie Hales responded, "Nearly every day, I, or someone in my office, hears a complaint from a citizen about the poor quality of design of new construction. . . . I simply cannot support your request that we do nothing about this issue. So I want to encourage you and your members and your colleagues in the development industry to propose something—anything—that will put a stop to the ugly and stupid houses that we see going up."

The same intolerance crops up with high-brow art. When Bard College hired innovative architect Frank Gehry to design a $26 million performing arts center, neighbors in the school's Hudson River community raised a ruckus with the planning board. Gehry's stainless steel structure, they claimed, would destroy the visual harmony of the local landscape, with its woods and historic buildings. Bard unsuccessfully argued that the building would be barely visible from outside the campus. Under pressure from the public and planning board, the school eventually agreed to find another site for the center. It will move the building farther inside the campus, away from existing arts buildings, at an additional cost of $10 million.

McNeilly, for his part, claims his painting is a patriotic, artistic gesture that deserves First Amendment protection. Local officials suspect he's just trying to make Los Angeles more hospitable to commercial "supergraphics"—mural-size ads for movies and other products. The city of Los Angeles is studying how to regulate supergraphics, and the answer will almost certainly be "stringently."

Westwood councilman Mike Feuer is a well-known opponent of billboards and "visual blight," while McNeilly pioneered commercial murals on the Sunset Strip, which is outside the city's jurisdiction. McNeilly's case isn't about free speech, says a Feuer spokesman, but about land use. "It goes to the issue of whether you want a supergraphic over your house or near your place of business."

As a Westwood resident, I don't think that outcome would be so bad. Competition pushes commercial artists to create attractive, visually appealing images. And if you don't like a mural, or a house with a big garage, or a funky arts building, you can always look away. That's a far less costly, and far more peaceable, remedy than asking other people to submit their visions to bureaucratic authority.