Some people call it the "Smurf house" or the "mushroom house," and a lot of people hate it. But this unusual home has something rare in Dallas: conviction. And it's evidence of the city's freedom to realize your dreams. 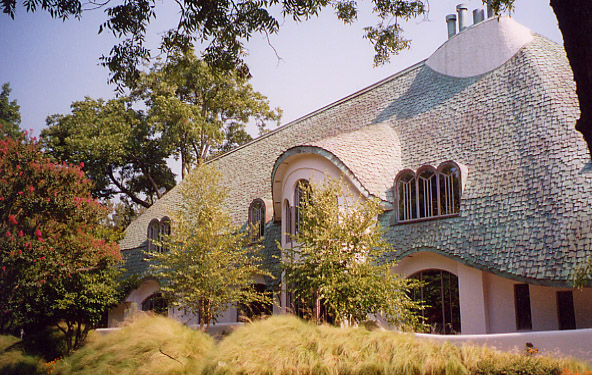 I first saw Tom and Jane Ann Workman's house from the window of my real estate agent's car. It was the spring of 2000, and my husband and I were in Dallas looking for a place to live. Moving from a Los Angeles neighborhood in which 1,500-square-foot bungalows regularly sell for a half-million dollars, we found the prospect of a spacious new home one of Dallas' big pluses. But we certainly weren't looking in the Workmans' Highland Park neighborhood; we were just driving by.

Our agent, a transplanted San Franciscan, disapproved mightily of the unusual house nestled on the triangular lot at the intersection of Armstrong Parkway and Preston Road. It was, we could tell from his tone, something of a local scandal. They'd torn down a beautiful old home to build it, he said. And the city doesn't have any sort of architectural review board to prevent such outlandish designs!

Maybe it's the difference between northern and southern California, but I couldn't share his outrage. Sure, the house was odd, but where I come from fairy tale houses are a beloved legacy of Golden Age Hollywood icons to be preserved, not aliens to be purged. If you want truly weird, you have to go down to Venice for Frank Gehry's plywood-and-chain-link-fence period. And the idea of a city without architectural review struck me as a relief, a sign that the locals might value personal freedom over bureaucratic control.

Over the next few months, as we settled into Dallas life, we occasionally heard other comments on the Workmans' home. All of them took the same scandalized tone. The house was an affront to local mores. It was an eyesore. It didn't fit in with the neighbors. It was strange, fantastical, eccentric. It was just too damned peculiar for Dallas. When I asked Tom Workman if he'd talk to me for this column, he politely declined. Every new bit of publicity, it seems, brings more criticism. "Has it been that bad?" I asked. "It's been pretty bad," he replied, sighing. 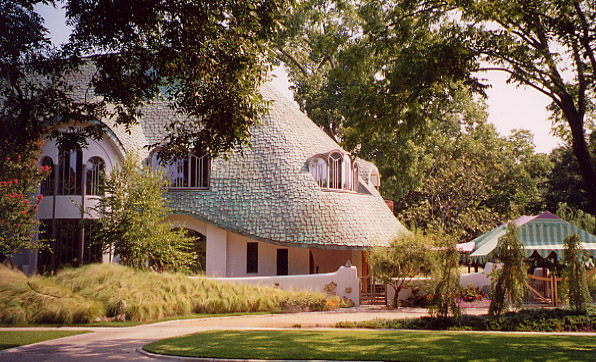 Armstrong Parkway is a street of traditionalist dream houses: Tudor, Georgian, Colonial revival, with several white, columned Taras. The homes hark back to the landed leisure of pre-industrial days--no Bauhaus boxes, no Prairie Style horizontals, not even Victorian gingerbread. But their origins are as much in the imaginations of their owners as in any literal historical precedents. These lavish mansions incarnate visions of the good life. As proper and conventional as the houses seem, the street is a sort of fantasy land, famous for its residents' lavish Christmas light displays.

The Workmans' home is equally dreamy and just as rooted in an imagined past. But instead of the straight lines and columns of its Tudor and Colonial neighbors, it presents the street with flamboyant curves, arched windows leaded with chevrons and vertical panels, and a low-riding, mushroom-style roof shingled in green-blue copper. With its combination of organic shapes, Japanese influences, and romanticized folk imagery, the house recalls art nouveau styles. It reminds some people of Barcelona's Antoni Gaudi, who also used dramatic curves, but it's far less ornamented than his Gothic-inspired facades. Like most of its neighbors, its forms allude to an English heritage. While no thatched hut ever approached the home's 6,000 square feet, its roofline was inspired by country cottages.

Awnings in bright green and white stripes, with fuchsia-accented peaks, cover much of the driveway, serving as a carport and dominating the view from Preston Road. Instead of a flat green yard, the lot is marked by a low plaster fence bordered most of the way around by rolling mounds of tall, shaggy, softly swaying love grass--the stuff of prairies, not of palace lawns. Tom Workman, an architect, not only designed the house, but he also created the special shingles that cover the roof. Jane Ann, an artist, selected the awning colors and decorated the interiors. She did agree to talk with me briefly, because, she says, "We love this house." To the Workmans, it represents a realized dream. 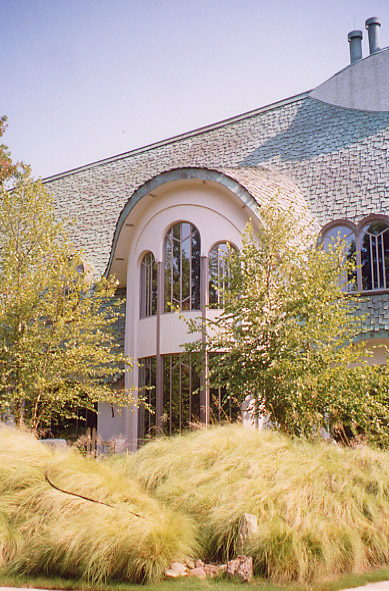 Obviously, not everyone shares their enthusiasm. The house isn't to my personal tastes either, which run toward less nostalgic styles, and I think the awnings are downright hideous. But regardless of what you think of its looks, the Workmans' house is good for Dallas. It helps to correct the city's weaknesses and highlight its strengths.

Dallas is ugly. Not a little rough around the sprawling edges like Atlanta or Phoenix, but really, really unattractive. Saying so may be impolite, but I'm afraid it's true. Dallasites tend not to notice just how drably bad the city looks, because they're used to it. But go away for awhile, or arrive here from out of town, and the impression is overwhelming. A childhood friend who has lived here for 20 years says she cries when she comes back from our hometown in the South Carolina Piedmont's lush, rolling hills. She can't believe she lives in such an ugly place.

We start with a landlocked, tree-hostile plain, offering neither the comfort of water, shade, and hills, nor the awe of deserts, oceans, and cliffs. Before I moved here, a native told me that Dallasites pay a lot of attention to the interiors of their homes because the natural environment is so utterly devoid of beauty. We have gorgeous evening skies, but that's about all we get from nature.

It's not just nature that makes Dallas ugly, however. People help. The built environment reflects a combination of gigantism, aesthetically indifferent pragmatism, and insecure conformity. The Texas-sized monuments downtown make for a nice skyline, a substitute for mountains from a distance, but they don't do much for ground-level appeal. From the sidewalk or the road, the typical skyscraper is just another hostile facade. And even well-executed monuments can't make a city appealing as a whole. It's the thousands of ordinary homes and businesses, not a few architectural standouts, that create a city's look and feel.

It's no surprise that, in a boom town like Dallas, most of the ordinary buildings are, well, pretty ordinary--structures designed to get the job done, not to make a statement or improve the view. There's nothing wrong with that per se. Aesthetics is not the only value, and good looks don't come free. The real problem arises when that sort of indifferent pragmatism meets the city's insecure conformity. When people do have money to spend, the results tend to be timid. Build a nondescript house, goes the reasoning, and you'll be able to sell it. Hence the Highland Park two-story square--"four-four and a door"--that substitutes size for style. Dallasites may dress with panache, but their buildings are the equivalent of the Washington, D.C., blue-suit, red-tie uniform, an ensemble designed to deflect attention. The result is as boring as a C-SPAN fashion show.

Not so the Workmans' house. It has conviction. It takes chances. It was built not for resale value but for its owners' pleasure. This is a house with personality, an expressive work of art. It embodies an unabashed romanticism that stands out in a community that likes its office buildings glass and its homes aristocratic. It declares, perhaps without meaning to, that tastes differ. If the house gives the neighbors something to talk about--and think about--so much the better. As Stanley Marcus observed in a Morning News column defending the house, "In a country that thrives on contemporary design in automobiles, clothes, public buildings, and spaceships, homes can stand a little competitive shake-up."

With the passage of time, the Workmans' home may well become a beloved icon, appreciated for its whimsy and distinctiveness. Even those who hate its style may come to appreciate its presence. There is ample historical precedent, from the Eiffel Tower and the Golden Gate Bridge to that giant doughnut by the freeway in LA. Or we may just get used to the house and cease to notice it except when driving around with someone new to town. Either way, the house makes the area more interesting, and that alone is a blessing.

The Workmans' house does not, however, simply affront Dallas culture. It affirms its most positive aspects. The fundamental fact is this: even if the neighbors complain for the next 50 years, the Workmans got to build their dream house. Local regulators required just a few modifications, including chimneys mandated by rules that haven't kept up with gas-fireplace technology. But such limits were aesthetically neutral, dictated by health and safety concerns or basic density and setback requirements. And that's what's good about Dallas or, in this case, Highland Park. This area hasn't joined the technocratic consensus that says that committees ought to dictate tastes. It still has room for aesthetic creativity and individual enterprise.

Architectural review boards are sweeping the country. By the best available count, a 1993 survey by University of Cincinnati professor Brenda Case Scheer, 83 percent of American cities and towns have some form of design review to control building looks. These bossy boards redraw rooflines, dictate door shapes, and decree colors. They keep out modern styles and ban new building materials. They fiddle endlessly with other people's designs. In the name of beauty, they impose uniformity. Professor Scheer says the trend appears to have accelerated since the early 1990s, and she compares its adoption rate to "zoning in the 1930s."

It worries her, as it does many architects. Although she dislikes the "culture of aesthetic poverty" created by purely pragmatic commercialism, she fears even more the legally mandated creep of boring conformity. "All over the country, in every state and most cities, adventurous design is being smoothed out or blocked outright," she writes in Harvard Design Magazine, addressing fellow architects and planners. "At issue here is not the freedom of the 'prima donna' architects, but the potential of the city, of any designed environment, to be a sharp and stimulating place."

Some cities in the Dallas area have given up that potential, but not all of them. Not Dallas itself, and not Highland Park. Timid though its tastes may sometimes be, this is still a place whose institutions value freedom over security. If you can live with criticism, nobody will stop you from following your aesthetic dreams. The city's preeminent tastemaker will even rise to your defense. "The British manor houses of Highland Park will retain their beauty for householders who choose traditionalism over modernism," wrote Mr. Marcus. "They are handsome and impressive in their own way. In a democratic society, there is room for both. Live and let live!"

It's still possible here to build the house of your dreams--not just because the land is cheap but because the people, however scandalized they may be by your tastes, won't call the design police to stop you. That tolerance is a rare and precious asset.

"Live and let live" does more than foster civic peace. It encourages civic greatness. Metropolitan centers do not achieve "world-class" status by building rail lines and constructing a few cultural monuments, the quick-and-dirty prescriptions of every small-town booster. They achieve it by fostering the creativity of their citizens, by letting new forms and institutions arise at every scale of life. Cities don't become great by squelching surprises. They do it by encouraging dreams. So it is that the strange, romantic house at Armstrong and Preston is more than one couple's much loved home. It is, in all its eccentricity, a symbol of hope for Dallas' future.