The WaPost editorializes on a good test of how serious the administration is about spreading liberal democracy in the Mideast. Does the case for freedom include our good friends the Saudis?

The Saudi crackdown began Monday with the arrest of at least five prominent intellectuals, including professors Abdullah Hamed, Matrouk Faleh and Mohammed Said Tayeb; by yesterday the number of detained was reported to be as high as 10, though several were said to have been released. Those arrested include several leading political liberals as well as moderate Islamists. Most signed a petition in December calling on Crown Prince Abdullah to lay out a timetable for making Saudi Arabia a constitutional monarchy -- a demand that sounds far-fetched now but sets a reasonable goal for the long run.

That, it seems, was not their offense. What prompted the arrests, Saudi sources say, was a plan by the reformers to establish an independent human rights organization. The professors first asked permission to set up the group, only to be told that the government planned to establish its own human rights organization. Predictably, the official group rolled out last week excluded the dissidents as well as other notable government critics. So the reformers revived their plan for an independent organization -- only to be dragged from their classrooms by Interior Ministry officials, purportedly for "questioning." The point was obvious: to stifle what would have been a genuinely independent movement to advocate for political freedom, women's rights and other reforms.

When we were married almost 13 years ago, my wife and I combined our last names with a hyphen. It wasn't too bad. I liked Mallon-Kraft better than Kraft-Mallon, so my wife's name went last.

I got a bit of grief from some of my buddies, but no real hassles, so it wasn't much of a problem personally. However, the general public couldn't figure out a hyphenated name for the life of them. I got mail to Mallonkraft, Mallograft, Maccon-karft, Kraft D. Mallon,....

When our son was 2, we changed to just Mallon. I believe my wife felt sufficiently liberated in our marriage that the consequences of the kid with a hyphenated name were more pressing. It's not that there'd be big consequences, but rather a matter of inconvenience. My wife said something to the effect, "If people are just going to abbreviate it, the whole point of retaining both names doesn't make much sense." 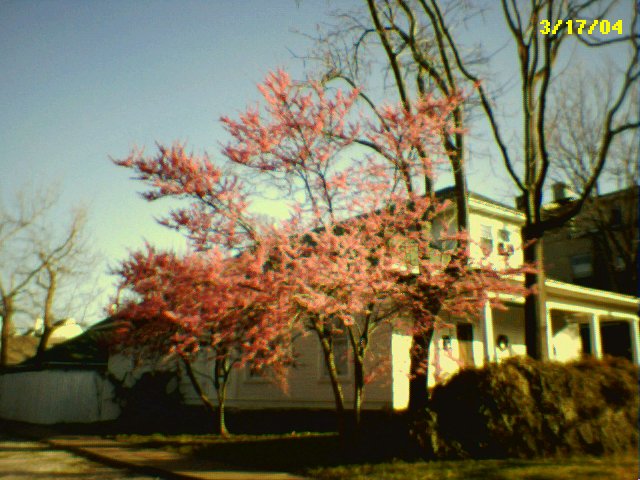 Taken with my new Palm Zire 71, which isn't even really a camera.

Geron Corp., which owns nine of the embryonic stem cell lines eligible for federal research money, has successfully used stem cells to cure mice of spinal injuries. According to the WSJ report (link should work for a week), Geron plans to try the technique on humans with new spinal injuries. From the report:

The Menlo Park, Calif., company hopes that injecting stem cells -- which have been modified to become the naturally unreplacable cells that insulate nerve cells -- into the site of a spinal trauma will help reduce the severity of paralysis.

It worked in mice. The company anesthetized the rodents and broke each of their backs in the same way. The control group ended up paraplegic, unable to move below the waist. A video showed these mice dragging around hindquarters. For the others, Geron scientists injected the site of the injury with human embryonic stem cells. Within a couple of weeks, these mice were walking on their hind legs.

Dr. Okarma said he expects this to help only for new cases of spinal injury. "Scar tissue gets in the way, so this won't help the Christopher Reeves of the world," he said. But it could be a potential answer for the 11,000 Americans who suffer spinal-cord injury each year. "What we are achieving in this model is what no drug could ever do," he said.

Next year, the company plans to file for FDA approval to start studying stem cells in humans with new spinal-cord injuries.

Rodman & Renshaw analyst Ren Benjamin expects the agency to ask for substantial animal safety data before allowing human studies because the company obviously won't be able to test the safety of the stem cells on healthy adults who haven't already suffered spinal injury. Mr. Benjamin doesn't own Geron shares, but his firm did investment banking for Geron in the past 12 months.

If the process ends up working, Geron would probably be able to charge a hefty sum for the treatment. "Think of the benefit to those patients versus the economic burden if you remain crippled," Mr. Benjamin said.

I recently tried out the sort of background technology they could have used on Century City. The Albertson's in my neighborhood has introduced "Shop 'n' Scan," a handheld scanner you take around the store with you, scanning the prices of your groceries as you pick them up. Based on my trial run, the scanner works great--it's actually fun and it shortens the checkout process enormously. (Here's a dopey set of photos from a local radio station.) Some retailing experts are afraid eliminating personal contact with the checkers will reduce customer loyalty. Unless the general public is radically different from me, I doubt that actual customers look forward to those encounters, though, of course, a pleasant checker is better than a grumpy one. Most of us just want to get our stuff and leave. I think these scanners will be everywhere in a few years.

The one flaw in the system is that today's grocery carts don't accommodate bags, and Shop 'n' Scan assumes you'll bag as you go. We need a redesigned version of IDEO's famous shopping cart, one that takes cheap, disposable bags instead of fancy plastic boxes.

Last night, I watched Century City, the new lawyers show set in the year 2030. The idea of the show is promising but, like most critics I was unimpressed. The show's characters were awfully flat and the setting was almost exactly like today. Real lawyers in the future would take for granted legal, cultural, and technological developments that strike us as strange. It's the background, not the cutting-edge issues, that makes the present feel different from the past. A 1978 show about 2004 might have featured a plotline on cloning. It wouldn't have routinely shown 40-year-old new parents of twins or business people walking down the street talking to no one, with wires hanging out of their ears. It wouldn't have Starbucks, or Queer Eye for the Straight Guy, or rock-and-roll megachurches. (Come to think of it, today's networks haven't discovered rock-and-roll megachurches either.)

HOW I BECAME A SIZE 6

Yes, I've lost weight. But when I weighed this much in my 20s, I was between an 8 and a 10. MSNBC reports on a survey to measure the trend:

CHARLOTTE, N.C. - Well into what paleontologists of the future might call the Fast Food Drive-Thru Epoch, the most complete body survey conducted in 50 years shows Americans have super-sized, particularly in the waist and hips.

TC2, a company based in the Raleigh suburb of Cary, used light-pulsing, 3-D scanner technology to measure some 10,000 Americans of all ages and ethnicities. The SizeUSA survey confirmed that all those extra french fries have come with a price.

The study was funded by clothing manufacturers, the military and colleges and universities, all of whom have a keen interest in body sizes.

Size 8 has long been thought to represent the measurements of the average American woman. In the clothing industry, a size 8 officially is supposed to be a 35-inch bust, a 27-inch waist, and 37-1/2-inch hip.

In truth, some manufacturers made the adjustment years ago. Some sell a size 10 as a size 8 to flatter women's vanity, TC2's Jim Lovejoy, who conducted the survey, said in a telephone interview Monday.

Of course, as ergonomic experts have started to notice, no one really comes in a standard size. There are too many potential variables. No matter how you renumber the sizes, I'll always have short arms and long legs, a short waist, and a very small waist-hip ratio. So nothing will fit. (And don't get me started on shoes.) That's why there are tailors.

POSTREL *IS* MY NAME

I get a mildly ticked off whenever I read in the NYT's Vows section that So-and-So Bride "will keep her name." What they mean is that she'll keep her father's name. ("Her" name is her first name.)

On the many occasions I've been asked to defend my choice of surnames, I've always said that I love my father but I chose my husband and, besides, I legitimately get the initials V.I.P. (Another bonus is a name no one else has. Postrel is an Ellis Island concoction and, since most Jews wrongly believe my first name refers to Jesus's mother rather than Elizabeth I, there are no other Virginias in the family.) Fortunately, today's brides don't make such a big deal of the name game, as Katie Roiphe (her maiden name) explains:

Interestingly, over the past 10 years fewer and fewer women have kept their maiden names. According to a recent study by Harvard economics professor Claudia Goldin, the number of college-educated women in their 30s keeping their name has dropped from 27 percent in 1990 to 19 percent in 2004. Goldin suggests that this may be because we are moving toward a more conservative view of marriage. Perhaps. But it may also be that the maiden name is no longer a fraught political issue. These days, no one is shocked when an independent-minded woman takes her husband's name, any more than one is shocked when she announces that she is staying at home with her kids. Today, the decision is one of convenience, of a kind of luxuryï¿which name do you like the sound of? What do you feel like doing? The politics are almost incidental. Our fundamental independence is not so imperiled that we need to keep our names. The statement has, thanks to a more dogmatic generation, been made. Now we dabble in the traditional. We cobble together names. At this pointï¿apologies to Lucy Stone, and her pioneering work in name keepingï¿our attitude is: Whatever works.

As Instapundit has recently noted, Amazon sells just about everything under the sun these days. What Glenn didn't tell you is that if you buy any of this stuff starting from a link on an Amazon Associates site like this one, the site owner gets a cut, usually about 5 percent. If the InstaFamily weren't already rolling in dough, Glenn could have put a code to his wife's site on that link to the milk. On this site, there's always an Associates code in the Amazon links. So if you're in the market for a Segway or a huge flat-screen TV, please start here.

WHERE DO CUPHOLDERS COME FROM?

One of the most noticeable differences between the 1986 Civic I traded in in April and the 2003 Civic that replaced it is that my new car has holders for my Diet Cokes--no more squeezing cans between the driver's seat and the door, which was a passable substitute except it didn't work for 20-ounce bottles. Writing on Slate, Henry Petroski, whom TFAIE readers will know for his "form follows failure" formulation, looks at the evolution of cupholders. I remember those little dents in the glove compartment lid from my parents' 1961 Ford Falcon, and the old days when McDonald's not only didn't have wi-fi, it didn't even have seats.