THE PRICE OF SELF-GOVERNMENT

THE SMARTEST PERSON EVER

I've got to agree Tyler Cowen on this question. Also the least mentionable.

WHAT WERE THEY THINKING, INDEED?

Neither does Steve Hayward. Neither do I. 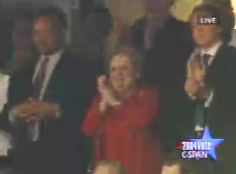 During the tumultuous applause before Bill Clinton's speech, while most people in the convention hall were going wild with love, C-Span's cameras caught Jesse Jackson standing impassively, hands clasped in front of him. (The video is available on the C-Span website.)

Last night, Bill Clinton gave one of the best speeches of his life. (He also demonstrated, by contrast, why he's the former president and Senator Clinton isn't.) I won't pick apart the distortions and policy fuzziness, since I'm sure by now countless Republican partisans have taken care of that. What interested me about the speech was how well it captured how Democrats--the mainstream, not the insane leftoid conspiracy freaks--understand themselves and their opposition.

We think the role of government is to give people the tools and conditions to make the most of their lives. Republicans believe in an America run by the right people, their people, in a world in which we act unilaterally when we can, and cooperate when we have to.

That's an interesting anti-elitist message, one that directly contradicts the Republicans' view of themselves and their opponents. Both parties, in other words, think the other guys "believe in an America run by the right people." Technocracy is certainly dead as a governing ideal, though not as a practice.

Clinton's statement can be read many different ways, depending on your point of view. "The role of government is to give people the tools and conditions to make the most of their lives" can describe anything from a classical liberalism that emphasizes the importance of underlying institutions--if I didn't know the source, I might endorse it myself--to a Swedish-style welfare state.

The other interesting thing about Clinton's speech is what it didn't say. It didn't mention "a woman's right to choose"--a phrase that used to be all but mandatory in Democratic convention speeches. It didn't mention gays. It didn't mention immigrants. On the social issues, where the parties disagree most emotionally (and where the chattering classes, including me, are liberal but swing voters aren't), Clinton said nothing. He aimed his speech at John Kennedy's Democratic party.

John Kerry is smart to put quite a few days between himself and Bill Clinton's star power. Maybe by the time Kerry takes the podium, people will have forgotten the contrast.

I switched to Safari as my browser a couple of months ago, but I still don't know how to get Movable Type's bookmarklets feature to work with it. Consequently, to post a link, I have to cut, paste, and code--a two-stage process if I also want to quote from the linked article. If you know Safari and Movable Type and can help, please email me. Thanks!

In response to the post below about info on clinical trials, reader Oren Grad sends the following links to other. more direct sources of information: Thomson Centerwatch and NIH.

Andrew Sullivan offers John Kerry some good advice. Andrew is deluded to think swing voters are libertarian (a rare breed), but he's almost certainly right that many (or most) can live without another four years of George Bush, even if they don't hate him.

Dallas blogger John Lanius has posted a fascinating artifact from 1961, "a wonderfully-preserved example of pre-Internet, multimedia political opinion, produced and distributed by the American Medical Association and deployed via the 'Women's Auxiliary' (not the Spouse's Auxiliary): Ronald Reagan Speaks Out Against Socialized Medicine." John reproduces not only the text of the accompanying direct mail (to his grandmother, a doctor's wife) but photos of the package and MP3s of the (vinyl) record of Reagan speaking on the topic.

THE VOICE OF FEAR

When I was in New York a few weeks ago, a friend in the magazine business told me he thinks the ferocious Bush hating that he sees in New York is a way of calming the haters' fears of terrorism. It's not rational, but it's psychologically plausible--blame the cause you can control, at least indirectly through elections, rather than the threats you have no control over.

I thought of that insight today when I glanced at Maureen Dowd's column and read this sentence, "Maybe it's because George Bush is relaxing at his ranch down there (again) while Osama is planning a big attack up here (again)."

That is the voice of a petulant child, angry that she has a tummy ache while Daddy is at work or Mommy is visiting a friend, or the voice of a grouchy wife angry that she has a migraine while her husband is out coaching the kids' baseball team. You're upset that you're in pain (we've all been there), so you get mad at someone whose presence wouldn't make the pain any better.

No mature student of politics believes the president of the United States goofs off on vacation. It's not the kind of job you escape. George Bush may be completely insane to voluntarily spend July in Texas--as opposed to Bill Clinton's favored coastal retreats--but Osama bin Laden is no more or less a threat than in Bush were in Washington. But if blaming Bush makes people feel better, safer, or at least able to focus their anger on someone they can hurt, they'll blame Bush.

Speaking of the Texas summers, I escaped to L.A. a week ago and will be here for a couple of weeks. I'll be speaking on The Substance of Style at the Art Center College of Design in Pasadena on August 5. The talk is free and open to the public.