When a hotel room improves its aesthetics and raises its rates, should the price hike count toward inflation? If the room is nicer and the price doesn't go up, should that push down the CPI? My new NYT column looks at the dilemmas intangible quality improvements pose for inflation watchers:

Earlier this month, Marriott International unveiled new designs for the rooms in its various hotel chains. These are not routine updates to replace worn-out furniture or carpets. They represent a significant shift from the cookie-cutter standardization that built Marriott into one of the world's largest hotel companies, to a new emphasis on aesthetics and personalization.

"It's a makeover," said a company spokesman, John Wolf.

From granite countertops and aromatherapy shampoos in the bathrooms to piles of pillows on the beds, the rooms aim to please a style-conscious new generation of travelers. The floral bedspreads once ubiquitous in hotel rooms are out. After all, says Mr. Wolf, "Who has one of those at home?"

Marriott is following an industry trend. Over the last several years, hotel chains have been competing ever more intensely to upgrade the look and feel of their rooms. That competition was set off by Starwood Hotels and Resorts with its stylish redesigns of Westin and Sheraton rooms beginning in 1999.

This emphasis on aesthetics goes beyond hotels to all sorts of products and commercial environments, from the design of cellphones and trash cans to the look and feel of stores and restaurants. The quality of goods and services is increasingly judged not only by function but also by style.

These upgrades present real problems for economists charged with tracking inflation. Hotels hope to sell their redesigned rooms at higher rates. If they succeed, should economists count those higher rates as contributing to inflation or simply as consumers' paying for more to get more value?

The rest is here.

I will be on MSNBC today at around 4:30 Eastern time, discussing congressional overreach (and grandstanding) on baseball steroids and the Terri Schiavo case.

Reminder: You can get notices of my TV appearances and copies of (or links to) my articles via email by sending an email to [email protected]

Professor Postrel's colleague Suzanne Shu has a series of posts on the subject: here, here, and here. Suzanne is a behavioral economist (a student of Richard Thaler) and marketing professor whose research focuses on how increased temptation and the need for self-control changes as choices increase. Her work nicely combines insights on how the mind works with a dynamic understanding of markets.

Suzanne points me to this profile of Thaler, which includes a discussion of what his research on the Swedish experience suggests about private social security accounts in the U.S. It does not suggest we shouldn't have them:

Although Thaler and Cronqvist acknowledge that "three years of returns does not prove anything," they believe the United States can draw several lessons from Sweden's experience. First, a default fund must be devised carefully, because human nature dictates a large portion of investors' money will go there. With a U.S. economy 30 times the size of Sweden's, free-market entry for funds could result in thousands of choices, paralyzing the average consumer. Instead, the authors recommend offering a small number of funds, perhaps three, investing in index funds and bonds, with varying levels of risk. The funds would be managed by private firms subject to competitive bidding.

President Bush's proposal for Social Security reform, a 256-page document titled "Strengthening Social Security and Creating Personal Wealth for All Americans" (available for downloading at csss.gov) offers evidence of behavioral economics' move into the mainstream. Though no behavioralists sit on the bipartisan commission that wrote the report, its plan, Thaler admits, "is not much different from what we would propose." The document outlines three possible models through which 2 to 4 percent of a worker's wages would be invested in private accounts. Each model includes a "standard fund," akin to the Swedish default. A two-tier system allows initial contributions, say up to $5,000, to be invested in a limited number of funds, between three and five; once the first-tier threshold is reached, a still-to-be-determined number of second-tier funds will be available for investment. Fund managers must meet certain standards and compete to be included in the second tier. A governing board would be created to provide workers with "informative advice, and to implement reasonable changes in either tier that it believes is in the best interest of workers and retirees." 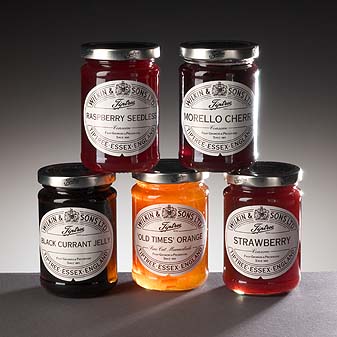 My latest Forbes column takes a look at the latest argument that markets make people miserable: too many choices.

A famous scene in the film Moscow on the Hudson has Robin Williams as a Soviet immigrant collapsing at the sight of an American coffee aisle, circa 1984. Imagine what would happen in Starbucks.

A free economy multiplies variety, the better to serve buyers with different tastes and different needs and to give people the chance to experience different goods at different times. Arguing that this plenitude is inefficient went out decades ago. The problem with markets, the detractors now say, is that all these choices make us unhappy.

To understand why there's a photo of jams here, and what they might (or might not) have to do with private retirement accounts, read the rest of the column.

In related news, this site will soon feature two new sections, representing my current areas of research: Variety and Glamour. Watch for them.

REMINDER: To receive my articles by email, send an email message to [email protected]

What It Takes To Sell a Book

Speaking of Women and Punditry

This year's Blogads survey, like last year's, shows that about three-quarters of respondents are male.

My Life as a Pink Box

According to this LAT report, the spat between Susan Estrich and Michael Kinsley over whether the LAT runs enough women op-ed writers (a.k.a. enough of Estrich's friends) keeps getting nastier. Estrich has revealed herself as a poorly read, though well-connected, hack--people who are interested in ideas know who Charlotte Allen is--while Kinsley has demonstrated why magazines are generally more interesting than newspapers: Magazine editors (and Kinsley is one, despite his current job) are paid to have vision and confidence, not to bend to pressure groups.

The whole silly brouhaha reminds me of how the LAT used to handle this question: through rigid, numerical quotas. I remember visiting Bob Berger, the op-ed editor, back in the early '90s. An old-style newspaperman, Bob didn't like the paper's demands that he demonstrate "diversity" on the op-ed pages. I especially remember his complaint that he not only had to find gay writers but gay writers who would mention that they were gay. No gay foreign policy experts need apply.

Of course, you don't get to be an editor in a giant, bureaucratic newspaper if you don't do what you're told. Bob not only complied but posted a chart on his door to prove what a good job he was doing. It showed each day's op-ed page as a line of five boxes, one for each article slot. The boxes were colored either blue or pink.

In response to all the buzz generated by Rod Dreher's question, "Is Dallas Good for Smart People?" opinion editors elsewhere are copying the idea, lining up pro, con, and maybe for questions like:

Is Boston good for aspiring models?
Is Manhattan a good place to raise children?
Is San Francisco good for conservatives?
Is Chicago good for vegetarians?
Is Silicon Valley good for artists?
Is Washington good for fashionistas?
Is Los Angeles good for pedestrians? (I may write in the affirmative.)

The funniest thing about the discussion in Dallas is how everyone assumes that the city should be good for intellectuals. (It's fine for "smart people.") Dallas is a city for normal people--people who focus on the reality at hand, not its deeper meaning; people who like their women pretty, their men successful, their children near at hand, their work productive, their religion inspiring. Intellectuals are weird. The only way to be an intellectual haven is either to have a very large population--large enough so that even a small percentage can constitute a critical mass--or to be a pretty strange city.

Too Dangerous to Fly

Salman Rushdie is supposed to come to Dallas to speak tomorrow night. But the airlines won't take him, because he's too dangerous (or, to put it more precisely, his enemies are). A plea has gone out for a private plane.

UPDATE: Problem solved, though with a side trip through Austin.

This I.D. Magazine article asks the question and gets answers from, among others, my friend Andrew Zolli. Short answer: It's somebody who observes the present more carefully then most people.