The Art of Science

Toward the end of The Substance of Style, I introduce a theme that will become more and more prominent in the coming years: the re-emergence of a pre-Romantic, or Renaissance, attitude toward the complementarity of art, science, and technology: "The burgeoning demand for aesthetic expertise overturns the cultural assumptions we've inherited from the romantics, who opposed art to technology and feeling to rationality; from the modernists, who treated ornament as crime and commerce as corruption; and from the efficiency experts, who equated function with value and variety with waste. In the age of look and feel, technology and art cooperate."

As if to illustrate this point, Princeton recently held a contest called The Art of Science, inviting students, faculty, and staff "to submit imagery produced in the course of research or incorporating tools and concepts from science." The 55 entries selected for the exibition are now online, and they're impressively diverse and beautiful.

Here, for instance, is one from operations research, a truly unromantic (but really important) discipline.

Check out the whole gallery here.

A Free Press vs. Discrimination Law

If you think the easy answer is, "Of course, we have freedom of the press," you aren't be keeping up with employment law. It's an open question, and according to a report in Editor and Publisher, two ex-staffers are suing the Indianapolis Star, alleging religous discrimination on just such grounds. (The Star says it doesn't discriminate.)

I'm blogging with the free wi-fi at Ruby's Inn, near beautiful Bryce Canyon. But I don't expect any more Internet access until Sunday.

Sometimes the most seemingly obvious connections are the hardest to prove. My NYT column looks at work by Alex Tabbarok (of Marginal Revolution, one of my favorite blogs) and Jon Klick on whether adding police on the street really reduces crime:

"When the terror alert level went up," he recalled in an interview, "you all of a sudden saw zillions of cops around the Capitol and around the Mall."

The pattern gave Professor Klick, now a professor of law and economics at Florida State University, an idea for how to examine a tough social science question: Do more police officers in fact reduce crime?

The answer may seem obvious, but many social scientists have argued that the number of police officers has no effect on crime rates and may even increase them. "If you look at the studies, particularly in the criminology literature, it's either no effect or actually a positive effect," Professor Klick said.

Cities with more police officers have more crime. That is probably because cities with high crime rates hire more officers. But it is hard to separate cause and effect, and, assuming that the officers do deter crime, to figure out how big the effect is.

"We spend a huge amount on police," Alexander Tabarrok, an economist at George Mason University, said in an interview. "So we want to know not simply do police reduce crime, but by how much. Should we have more police?"

He and Professor Klick examine the question in a study published in the April 2005 Journal of Law and Economics, "Using Terror Alert Levels to Estimate the Effect of Police on Crime." (A copy of the article is available at http://mason.gmu.edu/~atabarro/TabarrokPublishedPapers.html.)

To separate cause and effect, researchers need a "natural experiment" - in this case, an event that changes the number of police officers for reasons having nothing to do with the crime rate. The crime rates before and after the change can then be compared. 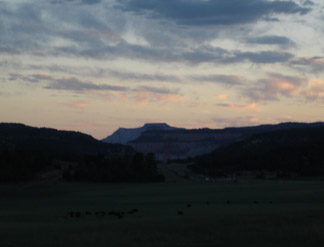 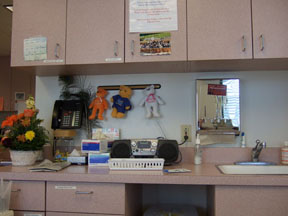 Here's the view from the porch swing where I'm blogging at Zion Mountain Resort. Forty-nine buffalo, including nine calves, roam these 600 acres of fenced meadow. They only come within photo range in the mornings and evenings, so you'll have to use your imagination at the moment.

"Reckless and Emotional"--Is that Good or Bad?

In an editorial titled "Leading with His Lip," the LAT, a resolutely Democratic editorial page, gets tough on Howard Dean.

Howard Dean has become the Russell Crowe of the Democratic Party. But unlike Crowe, who has been profusely apologizing for beaning a hotel concierge with a telephone in a fit of bad temper, Dean shows no signs of contrition for the intemperate rhetorical blasts that he sent flying in the direction of the GOP last week.

Judging by Dean's preposterous comments about all Republicans being rich and idle, and mostly white Christians to boot, the latter is inescapably the case. You can't be a good salesman if you spend your time insulting prospective customers, in this case people who haven't been voting Democratic.

The Army has missed its recruiting goals for four straight months--hardly surprising since a) alternative jobs have gotten more plentiful b) the downside of Army service--not just danger but separation from family--has gotten worse and c) compensation hasn't significantly changed. The drop in recruits isn't a crisis. It's a normal market reaction. And the military's response, like a private employer's, should be to beef up compensation and, if possible, widen the pool of qualified potential employees. Today's WaPost article on the subject suggests that the Army wants to do just that:

Projecting even bigger problems next year, the Army is preparing to ask Congress to approve higher incentives and legal changes to broaden the pool of candidates. The Army has leveraged incentives "right to the legislative limits in every category," Rochelle said. Proposals under consideration in the Pentagon include doubling the maximum enlistment bonus to $40,000 for troops in high-demand jobs such as intelligence, infantry, special operations and civil affairs, as well as linguists, Rochelle said.

Another proposal would raise the age limit for active-duty Army recruits from 35 to 40. The Army raised that limit for its reserve elements in March, but increasing it for the active-duty force requires congressional approval. Rochelle said the change would bring in soldiers with greater experience and maturity, while making little difference in terms of physical abilities -- saying that today's 40-year-olds are in better physical shape than they were when the law was written.

Sounds good to me. Unfortunately, too many supposed doves are salivating for a draft, which makes neither economic nor strategic sense. The only way they'll get one is to make volunteer service as unattractive as possible.

Reader Roger Thompson calls my attention to this funny take on too much choice, from cartoonist and interaction designer Kevin Cheng, who also has some interesting thoughts on designers' responsibility for limiting choices.

Lots of choice accommodates pluralism. As I wrote in my Reason article

Since different people care intensely about different things, only a society where choice is abundant everywhere can truly accommodate the variety of human beings. Abundant choice doesn't force us to look for the absolute best of everything. It allows us to find the extremes in those things we really care about, whether that means great coffee, jeans cut wide across the hips, or a spouse who shares your zeal for mountaineering, Zen meditation, and science fiction.

The challenge--to designers, marketers, entrepreneurs, and anyone else who offers choices--is to preserve the benefits of choice without forcing each of us to navigate an overwhelming number of choices.

Shortly after the Reason article went to press, I read this report (.pdf file) on a survey by the marketing firm WSL Strategic Retail. Respondents classified product categories like cereal, shampoo, or jeans into four groups: "Lots of choice organized in store so I can find what I want," "Lots of choice but organized in store to make it hard to find what I want," "Too Little/ Few choices," or "I always buy the same product so choice is not important." The results confirm many of my arguments, noting that "Shoppers want abundant selection, and most have figured out how to navigate the shelves to make the right choice." But the survey also points out that not every product category is equally easy to navigate. There's plenty of room for improvement in merchandising and (presumably) design. Among the most confusing offenders: jeans and cell phone plans, two frequent targets not only of anti-choice social critics but of overwhelmed consumers.