A Note from Sally

Sally is home from the hospital, doing well, and adding Diet Dr. Pepper to her repertoire of drinks. (She also looks a lot prettier than she does in that picture below.) She asked me to post this note to readers:

A number of dynamist fans and bloggers have sent me good wishes and praised Virginia -- the Goddess of Renal Fortitude -- for her supreme generosity. When I could answer individually, I did, but for those whose e-mail addresses were elusive, I want to thank you so deeply for your heartfelt encouragement and for, indirectly, calling attention to the desperate organ shortage issue. I will be turning my attention to that for the next big project....Fondly, Sally Satel

You have been a wonderful community of support for both of us. Thank you all very much.

Steve and I went to see Sally today, our first in-person visit since I left the hospital Tuesday morning. She's back to her old self and is supposed to leave the hospital tomorrow. I am very, very happy--happy that she's doing so well, happy that I could give her a kidney, and happy to have her as a friend.

I made her pose with her first post-operative dose of our favorite beverage. (The secret to our tissue compatibility is that our real blood type is Diet Coke.) 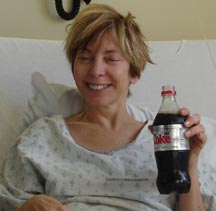 Her case manager says Sally has gotten more flowers than any other transplant recipient. She has a lot of friends.

If It's Not Regulated, It's Forbidden

The NYT's Dana Bowen reports that health inspectors have launched a campaign to shut down a popular new cooking technique that doesn't fit into existing regulatory guidelines. The campaign comes in response not to an outbreak of food poisoning--no problems have been reported--but to a New York Times Magazine story on the popularity of sous vide cooking.

The New York City Department of Health and Mental Hygiene has quelled the sous vide revolution, for the moment. In the past few weeks inspectors have told some chefs to throw out shrink-wrapped food, forbidden them to use the equipment used to make it and told them to stop cooking and storing food sous vide until they have a government-approved plan for it.

In some cases, inspectors are handing out fines, which start at $300 per offense. The department's actions seem to represent the first time a city agency has singled out the technique, and how chefs use it.

The city health code, which governs the way chefs cook, does not specifically address the way a restaurant should vacuum-pack food. While no health problem has ever been tied to sous vide in restaurant kitchens in New York, officials say they are concerned that food could breed botulism and listeria if it is vacuum-wrapped improperly. [Emphasis added.]

Side note: The one good thing about Times Select is that it gives NYT subscribers free access to the Times archives, including articles like the magazine piece linked above.

Given recent distractions, I'm a little late on this, but if you haven't read Jonathan Rauch's latest column, on translating classical-liberal works into Arabic, by all means do so now. With the help of a brave Iraqi translator, Cato's Tom Palmer is spearheading this inspirational effort. Here's the connclusion of Jonathan's piece:

The Internet, in contrast, makes possible worldwide, instant distribution, at a nearly negligible cost. MisbahAlHurriyya.org relies heavily on volunteers and donated Web services; its budget, says Palmer, is in the five figures. Thanks to e-mail, conferring and passing manuscripts between Washington, Baghdad, and Amman -- a logistical nightmare in the days of mail and fax -- is a cinch. The site, entirely in Arabic, advertises on the popular Arabic Web sites Albawaba.com and Aljazeera.net. The whole enterprise was impossible a decade ago.

Firmly establishing liberal ideas took centuries in the West, and may yet take decades in the Arab world. Authoritarian and sectarian and tribalist notions are easier to explain than liberal ones, and it is inherently harder to build trust in mercurial markets and flowing democratic coalitions than in charismatic leaders, visionary clerics, and esteemed elders. The liberal world's intellectual underpinnings are as difficult to grasp as its cultural reach is difficult to escape. Thus the disjunction within which Baathism, Islamism, and Arab tribalism have festered.

Yet few who are genuinely intellectually curious can read J.S. Mill or Adam Smith and come away entirely unchanged. The suffocating Arab duopoly of state-controlled media and Islamist pulpits is cracking -- only a little bit so far, but keep watching. In the Arab world, the Enlightenment is going online.

While we're on the subject, let me once again plug Liberty Fund's Library of Economics and Liberty, which offers searchable, full-text editions of classic works in English. The online versions mirror Liberty Fund's authoritative printed texts. 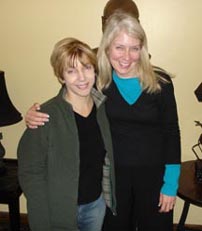 Here are Sally and I on Saturday morning before the kidney transplant. My operation went extremely smoothly. Hers took longer than expected, because a little bit of the kidney was spasming, making it hard for the surgeons to attach the blood vessels. Worse, a couple hours after surgery she started hemorrhaging and had to go back into surgery--an unusual and dangerous complication. Fortunately, she came through OK and is gradually recovering.

I am now out of the hospital and doing fine, recuperating at a friend's nice DC crash pad. I'm a bit weak and not as mobile as usual, but I'm off pain medication and more normal than not. Here I am: 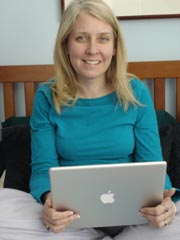 Unless people like Leon Kass get their way, someday patients with failing kidneys will be able to get made-to-order replacements that are exact genetic matches, either through therapeutic cloning or some now-unknown future technology. Now, however, if your kidneys stop working, you have three options: die, go on dialysis (regularly described as "living hell" by dialysis patients and their loved ones), or find a donor kidney. And donor kidneys are in short supply, made shorter by legal restrictions and social taboos.

Last fall, my friend Sally Satel wrote about the issue in general and her own search for a kidney donor. Between the time she wrote the article and the time it appeared in the NYT, I heard about her situation and volunteered as a donor. Our tissues turned out to be unusually compatible for nonrelatives and, when her Internet donor dropped out, I moved from backup to actual donor. We have our surgeries tomorrow morning.

As surgeries go, the procedure is safe and straightforward--far more so than people think. A donor can live a completely normal life with one kidney. The recipientis not so lucky, since a foreign organ requires a lifetime of immunosuppressant drugs. But that's a lot better than the alternative.

I'm delighted to announce that on March 15, I'll be joining The Atlantic as a contributing editor, writing a monthly column on "Commerce & Culture" and the occasional feature. My first piece will appear this summer.

In other writing news, if you're traveling Southwest Airlines this month, check out my article on pens in Spirit, the Southwest magazine. I hope to post the piece on this site eventually, but it's currently unavailable online.