Dan Drezner says no to those cloying, annoying ESPN ads.

What Will Those DIYers Think of Next?

CNet's Esoterica blog reports on a computer printer made from Legos. Ho hum, you say? Anyone can make a printer from Legos? Yeah, but check out what the printout is made of.

This LAT article by Reed Johnson starts out as sarcastic fluff, but analyzing the cultural significance of Eva Longoria eventually leads to some valuable insights--the sorts of things that should be blindingly obvious to anyone actually living in contemporary American culture but that are too often obscured by various political blinders. Here's one:

This phenomenon of inhabiting more than one culture simultaneously, without feeling a sense of conflicted loyalties, differs in important ways from Chicanismo, the political-cultural movement that arose among Chicanos (people of Mexican descent born in the United States) in the 1960s. Chicanismo was a survival strategy for members of a minority group struggling to get along in a society that treated them as third-class citizens. By necessity, its supporters felt, Chicanismo often took an aggressive stance of resistance toward mainstream U.S. culture.

The new dualism favors assimilation over resistance. Rather than being grounded in identity politics, it's being fueled by technology and the free flow of goods, ideas and talent across an increasingly open and globalized border. This border is not merely a physical place. It exists on the airwaves and in cyberspace as well, in big urban centers and remote pueblitos.

Its influence is especially evident among Mexican Americans and other Latino American youth, who are seeing themselves reflected not only in TV, movies and books but on millions of individual MySpace.com pages. They're wearing LeBron James jerseys, but they may root as hard (or harder) for El Tri, the Mexican national soccer team, as for the U.S. squad in the upcoming World Cup.

Despite an off-putting lead, the whole article is worth reading.

The folks who decided that mailing bricks to Congress is a good way to lobby against immigration picked an ironic symbol. Who exactly do they think builds America's brick walls? Have they been to a construction site lately?

Real invaders don't build buildings. They blow them up.

UPDATE: This Fortune article estimates that "up to 40 percent of new-home construction in the U.S. is being done wholly or partly by undocumented immigrants," possibly as much as 80 percent in Texas. Referring to Latino immigrants, legal or illegal, one contractor says, "If for any reason we lose that work force, you're going to see the time required to build a house double or triple and the cost of new homes increase 30 to 40 percent." And don't even think about remodeling.

Alex Massie, the Washington correspondent for The Scotsman, writes:

Like you, I'm disappointed Anne Applebaum is leaving the WaPo. Media Bistro's line, "We hear that it is largely due to her husband having taken a new job in a different city" is unintentionally amusing.

Um, yes, Radek Sikorski does indeed have a new job in a different city. He's currently serving as the Polish Defence Minister. Given that until recently he was prominent at AEI. I'd have thought a DC media blog would have known this.

I suppose with David Ignatius still in Paris the Post may feel it can't have two Europe-based op-ed columnists. Sad however, to see her go.

Anyone With Two X Chromosomes Will Do?

Like the folks at MediaBistro, I'm sorry to hear that Anne Applebaum is leaving the WaPost. She's a serious historian with a lively mind and a great devotion to human freedom. It's insulting to her talents and unique voice to say, as MediaBistro does, that "Most sad of all, however, is that Applebaum's departure leaves the Post's editorial/opinion pages virtually female-free." (They actually categorize her with Ellen Goodman.) And Charles Krauthammer is just there to represent the disabled, I suppose.

Oh, I just noticed the MediaBistro poster's name: Patrick Gavin. A man. I guess we all look alike to him.

I've been busy updating this site. The article archives now include all my articles from the NYT, Forbes, and D Magazine, as well as my other features. I've also updated the my list of forthcoming speaking appearances, two of which are this week.

If you'd like to receive my new articles by email, please send an email to postrel-list-subscribe[at]yahoogroups.com (substitute @ for the [at]).

My latest Forbes column looks at the outrageous refusal of some prominent hospitals to do kidney transplants for people who've found their donors through Internet sites or media publicity. Sally Satel addresses the same issue in The Weekly Standard.

The transplant establishment is, unfortunately, all too accustomed to managing the shortage rather than expanding the supply of organs. Too many powerful "experts" consider a donor who is moved by a particular stranger's story to be a generic "altruistic donor," for whom one stranger should be exactly the same as another. By their lights, favoring someone you've read about over whoever's first on the list is "unfair." (Check out Dr. Douglas Hanto's example toward the end of my article.) In fact, such a donor is someone who would not have given at all without empathy for a particular person. That empathy is no different in principle than the empathy one feels for a friend or relative.

And, no matter what The Onion says, organs don't grow on trees. Even assuming no change in the law, hospitals should do whatever they can to encourage, rather than discourage, donations. Sixty thousand Americans are waiting for kidneys. Even if every single family of a potential deceased donor agreed to contribute that person's organs, that would only double the number of cadaver kidneys available--to about 13,000 a year. Until biomedical advances make it possible to produce organs on demand, live donors are the only hope for the tens of thousands of Americans who need kidneys.

Inspired by op-eds by Sally Satel in the NYT and Richard Epstein in the WSJ, the Freakonomics blog features a lively discussion of organ markets. Richard Epstein published a related article in the WSJ in 2002 and, unlike his latest one, it's available online to nonsubscribers. 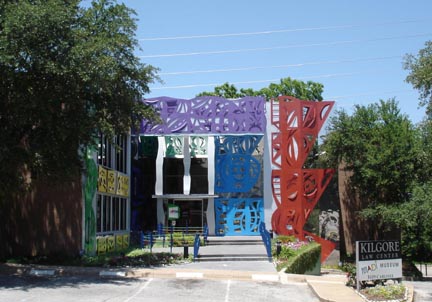 The Dallas Observer's blog brings word of plans to tear down one of my neighborhood's most enjoyable facades: the Madi Museum/Kilgore law firm. The building's facade and art space aren't that old. They date roughly to our arrival in Dallas six years ago. The artist who created the colorful plates surrounding the building is suing to block demolition. From the Observer post (via D Magazine's FrontBurner:

"The point is, the artwork is unique and kind of special, a wonderful expresson of public art," Winocour says. "Dallas has very little, unlike New York or Los Angeles, because there's not a lot of public investment in this city. We have billionaire philanthropists like Ray Nasher, but there's little public art, and it would be nice to present it in a city that likes to see itself as a world-class city. If it wants to be London or Paris it needs to encourage this. And it's great that at one time Mr. Masterson did...but if you challenge the constituionality of a statute designed to protect the artist and work and cast yourself as a patron of the arts, I think you're talking our of both sides of your mouth."

From what little I know about the law, I don't think he has much of a case. It sounds like artists who attach their art to buildings don't enjoy automatic protections, only contractual ones. But the more important point is what this interpretation of the law--or even the constant threat of litigation--would do to incentives. If the law makes interesting-looking buildings hard to tear down, nobody will build interesting-looking buildings. If the Madi Museum goes, I'll miss its happy face. But at least we were able to enjoy it for a few years.

In the new issue of D Magazine, high-dive enthusiast Tim Rogers takes on the latest regulatory attack on fun. An excerpt:

Since 1964, the city-owned Cottonwood pool in Richardson, on West Belt Line Road, with its 3-meter board, has served as a chlorinated firing range. Forty-two years of cannonballs. And can openers, preacher seats, watermelons, and flying squirrels (to depart from the munitions metaphor). Not to mention, for those who appreciate the splashless entry, jackknives, swan dives, and one-and-a-half front flips.

But not this summer. When the pool opens Memorial Day weekend, the Cottonwood high dive won't be there. The reason: Section L of Chapter 265 of the Texas Administrative Code, which prescribes clearances for diving boards, depths of water, and slopes of pool bottoms as they rise from deep end to shallow. The new rules became effective in September 2004. To oversimplify, they call, respectively, for greater, deeper, and gentler. Many municipalities gave their noncomplying pools a reprieve last season. But this summer, no exceptions.

Cottonwood had a prickly clearance problem further complicated by a slope violation. So even though Kerry Little, assistant superintendent of aquatics for Richardson, says no one had ever suffered an injury while jumping from the high dive, it had to be torn down this past winter.

The story was prompted by a tip from Dallas lawyer, blogger, and Dynamist friend John Lanius, via this high-dive-phobic author. (Just because I'm petrified of diving off diving boards doesn't mean I won't oppose stupid regulation.) John is on the board of a community pool in Plano, a Dallas suburb. John, whose older son's cannon ball illustrates Tim's article, sends this update:

Our fight's not over yet, as we're going to try and get some sort of reexamination by the Department of Health and maybe some legislative relief from our local representatives (one of whom grew up in Plano swimming in that pool). The best I would hope for would be some type of grandfathering of pre-2004 pools, but I'm not too optimistic. Fighting the grey fog of regulations just seems so futile. You might clear some of it, but it keeps pressing in from all around. I'll post updates on our progress (or lack thereof) on my blog.