In a post on Alan Wolfe's review of Dinesh D'Souza's latest book, I sarcastically concluded:

I look forward to the attention the NYTBR will lavish on such intellectually serious books as Brink Lindsey's The Age of Abundance: How Prosperity Transformed American Politics and Culture

and Brian Doherty's Radicals for Capitalism: A Freewheeling History of the Modern American Libertarian Movement

. Remember the definitive review they ran of Ryan Sager's The Elephant in the Room: Evangelicals, Libertarians and the Battle to Control the Republican Party

Although the NYTBR has become considerably less blinkered since my friend Sam Tanenhaus became its editor, it is still the NYTBR.

But the Review has punctured my cynicism. True, David Leonhardt's fairly short review of Radicals repeated the old canard about Milton Friedman advising Pinochet. But at least the book got attention.

And Brink's Age of Abundance

, a book more in line with my own inclinations than Brian's, receives a long review by George Will in this Sunday's section. As you can imagine, the Tory Will is not enamored with all that the Age of Abundance has wrought, or with Brink's happy acceptance of abundant choice. (He even uses the word "Piffle" in response to one argument.) But the conclusion is positive:

Lindsey rightly says that "today's typical red-state conservative is considerably bluer on race relations, the role of women and sexual morality than his predecessor of a generation ago." And "the typical blue-state liberal is considerably redder than his predecessor when it comes to the importance of markets to economic growth, the virtues of the two-parent family and the morality of American geopolitical power." In "the bell curve of ideological allegiance," the large bulging center has settled, for now, on an "implicit libertarian synthesis, one which reaffirms the core disciplines that underlie and sustain the modern lifestyle while making much greater allowances for variations within that lifestyle." If so, material abundance has been, on balance, good for us, and Lindsey's measured cheerfulness is, like his scintillating book, reasonable.

What You Won't Learn in Business School

A peculiar fact about business schools (at least in the USA) is that project management is not part of the regular MBA curriculum. Why is this peculiar? Only because a huge percentage of the work managers do is organized into projects, the success or failure of strategies often rests on the quality of execution of projects, and many of the principles and techniques of good project management are not immediately obvious. But hey, if anyone needs to know about this trivial stuff they can always go to a two-day workshop and get a certificate (probably from an engineering department). Or learn it on the job, which in this context often means screwing things up and trying to guess what you did wrong.

No need to dirty our students' hands with all that icky planning and critical-path stuff--the organization faculty can stick to motivational theory, the operations faculty to stochastic modeing, and the strategy faculty to the resource-based view. Then we can all feel elegant. And our students can elegantly screw up product development, new process installation, quality-improvement initiatives, marketing campaigns, and all the other project-based activities where they are supposed to add value to the firm.

Read the rest, with comments, here. 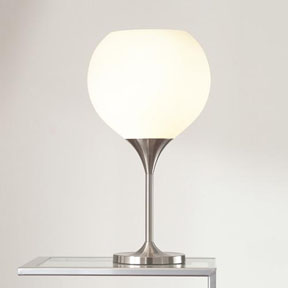 Lamps in catalogs usually don't have cords. They glow without the messy details of electrical connections: wireless glamour.

Now researchers at MIT have figured out a way to transmit electricity wirelessly. They demonstrated the idea by lighting a 60 watt bulb 7 feet away--not revolutionary (yet), but one step closer to truth in lamp advertising.

It turns out that the Dutch "reality" show about kidney donation wasn't so real after all. It was just a publicity stunt by the production company, designed to call attention to the kidney shortage. Tom Simon has info, as well as a link to a (serious) radio show he and his kidney recipient did for Dutch radio. Sally Satel's comment on the hoax (in an email): "BRILLIANT. They did it to get attention...It worked!"