LAT columnist Meghan Daum wonders why women's voices seem to be getting higher pitched and more girlish, something I've puzzled about myself. Is it a real phenomenon? Or just a false impression?

Assuming it's a real trend, it likely reflects the attitude the WaPost's Robin Givhan evoked in her article on Liz Claiborne's recent death: "Where once Liz Claiborne was celebrated for helping young women go into the workforce looking like adults, now adults are interested in looking like adolescents."

The always delightful, insightful, and extraordinarily quotable Michael Bierut talks about design and designers in an interview on WNYC. I highly recommend his new book, Seventy-nine Short Essays on Design

Dan Drezner interprets my complaint about the opening lineup at the Ideas Festival as "too many humanities types and not enough social scientists." I see how he got that impression, but it wasn't exactly what I was trying to say. I would like to see more social scientists, and I would like to see social science and policy questions addressed by people who know what they're talking about. But I have absolutely nothing against including lots of "humanities types" talking about their areas of expertise. I love to learn from them.

Take Melissa Chiu, the museum director of the Asia Society in New York, talking this morning about "Chinese Culture: The Tensions and Trends of Contemporary Chinese Society." In remarks that desperately needed photos but were otherwise fascinating, she recounted the evolution of the contemporary Chinese art world. Delayed by a phone call, I came in as she was addressing the aftermath of the 1989 Tiananmen Square protest, in which art students were heavily involved. The subsequent crackdown led to a large diaspora, particularly to the U.S., which accepted 30,000 Chinese students, and Australia, which took 20,000. (Chiu is from Australia.) During the 1990s, travel and communication between Chinese artists abroad and those at home was limited, and artists within China found it difficult or impossible to exhibit their works. Beginning around 1994, the Web became an important place for "virtual exhibits" that allowed artists within China to show the rest of the world their work. And as China opened more and more to the world for business reasons, the art world opened as well. The year 2000 was something of a turning point, as the Chinese government decided that avant garde art was OK. Chinese artists gradually began moving back to China and even those who remained abroad travel there more frequently.

The result has been a "New Renaissance" that Chinese artists compare to the great T'ang Dynasty period. Those who stayed in China have become "art entrepreneurs," operating large-scale studios with many employees and in some cases producing very large-scale works. "It's a great time to be a Chinese artist," said Chiu, noting that artists have far better facilities than their New York counterparts. "As China has become a manufacturing center in the world, so has it become an art manufacturing center," she said. The combination of commerce, craftsmanship, and culture really does sound like the Italian Renaissance.

Art has become an expression and source of national cultural pride, and Chinese artists increasingly incorporate and adapt national iconography: pandas, Chinese flags, Tiananmen Square, and, especially among younger artists who didn't experience the Cultural Revolution, images of Mao. (Where are PowerPoint slides when you need them?) When moderator Jim Fallows asked for examples of "xenophobic" art, however, Chiu said she couldn't think of any. In the art world at least, it sounds like Chinese pride is manifesting itself as positive, self-affirmation rather than negative, foreigner-bashing.

It's a great place, a great neighborhood, and a great deal.

My Parents Will Be So Proud

The great Manolo gets the same family-friendly rating. Reason's Hit and Run, on the other hand, rates an NC-17--not for its propensity for bad language but for the wonky drug policy posts.

Who Benefits from Airport Delays?

These guys. But they do better when passengers are surer about the length of the delay--another reason airlines should be candid about conditions. 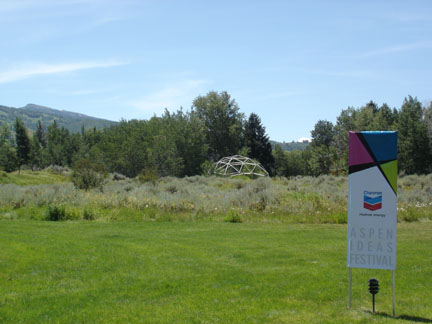 On The Atlantic's Aspen blog (where, demonstrating the organization's dedication to impeccable honesty, they've cross-posted my rant about the opening session), my colleague Clive Crook has an interesting account of two sessions on energy. Chevron's Peter Robertson made a good point in response to an audience member's question about oil spills: "Hurricanes Rita and Katrina had destroyed more than 100 oil wells in the Gulf of Mexico, and not a drop of oil leaked." That's progress.

The Aspen audience is, as Clive notes, very green, at least in the style sense. But, as the photo illustrates, that doesn't mean the place hates oil companies.

Speaking of Professor Postrel, he has a new post on Organizations and Markets, continuing a very popular earlier discussion on design puzzles, in this case the question of why grocery stores use "pick a horse" multiple lines rather than a single queue with multiple checkers. Comments are open.

Busy writing my previous blog rant, and answering editorial queries and other emails, I missed most of the morning Aspen sessions. I did, however, catch part of the session titled, "Nuclear Proliferation: Armageddon or Balance of Power?" with Jane Harman, Graham Allison, Ashton Carter, and James Woolsey. (Professor Postrel, ever the student of strategy, was there for the whole thing.) What a contrast to last night! The subject was focused, the panelists deeply knowledgeable and thoughtful about the tradeoffs and possible dynamic effects of any given policy course. Nobody was using vague policy pronouncements to make a statement about taste, style, or identity. But, alas, the problem with a serious discussion of a difficult problem, especially one that potentially involves mass fatalities, is that you don't come away feeling that you've found THE solution.

Is the Aspen Institute Allergic to Social Science?

With the notable exception of Anna Deveare Smith's hilarious channeling of Ann Richards (a "big personality"), the series of supposed "big ideas" opening the Ideas Festival last night was for the most part a procession of the banal, unoriginal, and half-baked. Jessye Norman is a great singer with tremendous stage presence, but she's not going to convince anyone who doesn't already agree that the arts should play a bigger role in public education. (You can see her here.) You can't even tell what ideal curriculum she has in mind or whether she wants to direct arts education at the gifted and enthusiastic or at everyone.

The nadir may have been water expert Peter Gleick's proclamation that "less is more," which started with the presumption that conventional production and economics assume more is always more--more resource consumption, more people, etc.--but that fresh water is a finite resource. Yet toward the end of his three minutes he mentioned that the U.S. actually uses less total water each year than it did 30 years ago. What a paradox--except to those who understand the difference between an input, where less is more (profitable), and an output. Economic competition is all about finding ways to offer more value at a lower cost, and one way to do that is to reduce inputs, including water. We don't need some kind of new economic system to produce that result; the old one works just fine. If the Aspen Institute wanted to present this big idea in a serious way, it would have invited someone like Jesse Ausubel, who has spent decades studying dematerialization. Or it could have picked a random economist, strategy professor, or business person. As Jonathan Rauch demonstrated in this January 2001 Atlantic article about oil, there are great stories to be told about how we've come to do more with less.

The Gleick talk also illustrated a bizarre lacuna in the conference in general: a distinct lack of social scientists. The absence of economic thinking is glaring, especially given its dominance in the rest of public discourse, but it's not as though the lineup is full of sociologists or psychologists either. The presumption seems to be that anyone can opine on those topics, especially if they're experts in something else, and that there are no new ideas or discoveries to be found in the social world.