I didn't get the memo, but the NYT reports that The Atlantic's website wall is coming down tomorrow. So now you can read my columns without a subscription--though a subscription is still a great deal. [Via Matt Yglesias.] 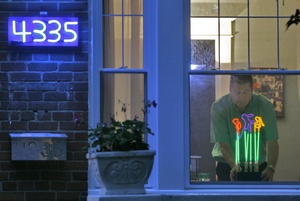 When I saw the headline for this article, I misread it to think that the neighbors were objecting, as they so often do. But in this case, it turns out that being a little different created a trend worthy of Mr. Pine's Purple House

I wrote about neighborhood disputes over paint colors here (with a sidebar about Mr. Pine) and about neon signs here.

Steve Portigal posts the sad story of how he lost 5,000 Flickr photos to a phishing scam. An excerpt:

Phishing typically targets banking and PayPal information, obviously for financial gain. In my case, someone left a comment on a photo, with a link. And clicking on that link led me to this sad situation. Why did Yahoo let someone post a link that was harmful?

Sure, the forums are also filled with smug posts (not from the flickr staff; they have been instructed to use a soothing tone, while not providing any resolution) from people who insist that the victims of these scams are to blame for not knowing better. I would have thought I did know better, actually.

This miscreant deleted my account, just for fun. And Yahoo can't restore it. We all know there are backup copies all over the place, but they can only recreate my account, blank.

That means that my 5000 photos are gone. Those I can upload. But all the people I've linked to are gone (I've spent a few hours trying to reconnect with those I can remember). Anyone who watched my photos via their contacts has lost me (and I've lost much of my audience). All the photos that were marked by others are gone. All the groups which I participated in by contributing illustrative images are gone. All the titles, tags, geotags, view counts and comments are gone. All the descriptions and stories and dialog with others in is gone.

My document, my story, my part of the community, is gone.

A commenter adds, "I'm sorry this happened to you. It makes me angry on your behalf and makes me realize how I have taken for granted that my blog is safe. I blog mostly so I have a record of my life, for me and for my kids, but I guess I'd better put it on paper."

In some of the reading I've been doing on health-care aesthetics, one article favorably cited various programs that bring artists and entertainers--specifically clowns--into hospitals to cheer up patients. Clowns? The last thing I want if I'm hospital is an annoying clown trying to "entertain" me. Apparently British kids agree. Reuters reports that in a survey of 250 patients ages 4 to 16, ALL of them said they "disliked the use of clowns, with even the older ones finding them scary." (Duh.) "We found that clowns are universally disliked by children. Some found them quite frightening and unknowable," says a researcher.

UPDATE: These people need to get a clue.

The Rocky Mountain News reports on his funeral. [Via Gary Farber, who was there.] What a loss.

"The Vanguard Army of Fatal Cuteness"

The MacBook Air Is Too Big

I'm keen to buy a new Mac laptop with a brighter screen so I can work outside. The super lightweight MacBook Air sounds great. But at 13.3" wide, it probably won't fit in my already-oversized purse. (And the word in fashion circles is that oversized bags are OUT.) What's wrong with 12" like my PowerBook G4? I'll check it out, but I'm guessing that the MacBook Air will prove too big and too expensive for me.

Or, to put it in words of one syllable, Which flags look good? With letter grades and comments, e.g., "Automatic weapons on a flag are especially bad." "Do not put a picture of a parrot on your flag" [Via Design Observer.]

With great photos and brief histories. [Via Marginal Revolution.]

How to Honor Andrew Olmsted

Obsidian Wings, where Andrew Olmsted used to post under the name G'Kar, explains his family's wishes for a fitting memorial and posts a LOOOONG list of the many blogs and media outlets that have covered his death and his final blog post. [Via Jim Henley, who also has interesting posts on Ron Paul.]

UPDATE: Contributing to his friend Gary Farber's pledge drive would also be a good memorial.