Just Another Night in Westwood 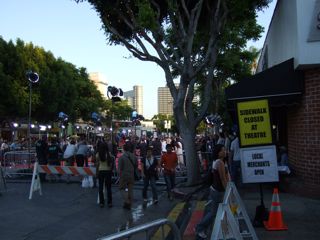 The Get Smart premiere almost blocked my way to the restaurant where I was meeting Professor Postrel for dinner Monday night. I had to go around the block to this semi-open sidewalk. 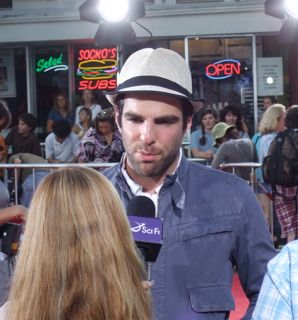 Mr. Quinto, do you really think viewers will believe that Sylar is Spock? 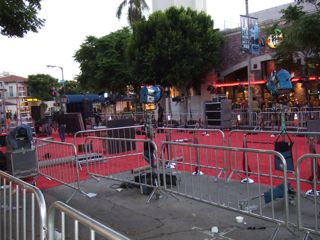 And then they were all gone. (Click the photos to see larger versions.) 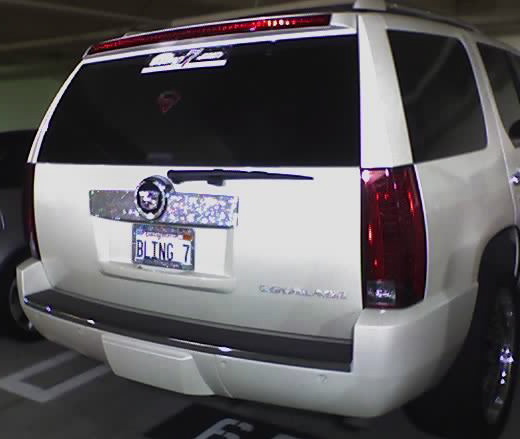 Assuming all the bling isn't meant as an ironic statement, this Escalade I recently saw parked in Westwood is probably owned by someone afraid of being mistaken for his (or her) poorer peers. My latest Atlantic column explains why conspicuous consumption is a sign of social insecurity.

But what explains why the one day I don't tote my camera with me I find the perfect illustration? A parking garage is no place for cell phone photography. You can't even see all the crystals on the Escalade's upper brake light strip.

ADDENDUM: On second thought, this isn't really a good illustration, since crystals on your car (as opposed to the diamonds they're imitating) don't really show much about wealth. They're more about taste--pleasure, rather than meaning.

And the Attorney Wore White

That's the LAT's photo from the first gay wedding in southern California. Here's another from a nice gallery on LAist:

Neither quite captures what I saw on TV last night: a shot that made me think, "I didn't know Gloria Allred was a lesbian." I'd mistaken the couple's lawyer, who'd made it to the center of the screen, for one of the brides. (She's in the center between the brides at the top photo, on the left next to the crying bride in the second one.) She was even wearing a cream-colored wedding suit just like theirs. Tacky, tacky, tacky. It's their day. Even a publicity-hound lawyer should have the decency to wear something in, say, an attention-deflecting quiet blue.

UPDATE: The Advocate has as many pictures of Allred as it does of the happy couple (3 each, including one with all three of them). This is not just rude. It's bad politics. If you want to get Californians to vote against a state-constitutional amendment to ban same-sex marriage, you should keep the obnoxious leftist lawyers out of sight and highlight the happy families--preferably with kids, mothers-in-laws, grandmas, siblings, etc. joining the celebration.

Dan Weintraub of the SacBee has a clear-eyed take, well worth reading. I could certainly design a much more rational fiscal system than California's, and it wouldn't include Prop. 13, but the politically likely alternatives to the current system--essentially more taxes on everyone and everything--would be much worse. The one thing Dan doesn't mention directly is the anti-development incentives Prop. 13 creates for local governments. (The exception is retail development, which generates sales taxes.)

The Power of Glamour (Not Charisma)

Matt Yglesias flags another example of the phenomenon I identified in my piece on Obama's glamour (quoting myself): "He attracts supporters who not only disagree with his stated positions but assume he does too." In this instance, as in many others, the issue is free trade. Matt writes:

But Obama's trade-skeptical rhetoric is perfectly consistent with his record. Admittedly, it's a pretty short record. And maybe he doesn't mean what he's saying. Or maybe he does mean it, but could be talked out of it once in the White House. But maybe not! Really, who among us is in any position to say? But he's a charismatic guy, so people see what they want to see.

Obama is a charismatic guy--at least in the stage presence sense of charisma--but it isn't charisma that makes free-traders like the WaPo's Sebastian Mallaby think he's secretly on their side. It's glamour, and the difference has political implications.

Charisma is a personal quality that inspires followers to embrace the charismatic leader's agenda (an agenda that, in the original sense of the word charisma, is seen as divinely inspired.) Glamour, by contrast, encourages the audience to project its own yearnings onto the glamorous figure. So, in this case, Sebastian Mallaby imagines that Obama will find "a way of crawling back from his embarrassing talk of reopening NAFTA." Mallaby maintains his own views about what's good for economic growth; he doesn't defer to Obama's own vision.

I wrote more on charisma versus glamour here, giving Obama credit for not embodying political charisma. I certainly hope he doesn't.

So it's more or less official: Hillary is pulling out and endorsing Obama. I share Megan McArdle's take and appreciate her pointer (though no link!) to Ezra Klein's smart comment on Guess Who's Coming to Dinner. I'm old enough (two years older than Obama) to have the race of my (McCain-aged) parents carefully noted on my North Carolina birth certificate. I remember a time when not supporting legally enforced white supremacy was a controversial position. So, yes, it's a big deal to have a black major-party candidate with a good chance of becoming the next president.

That said, Barack Obama is a real candidate running for the real presidency, not a fictional character, and I am not optimistic about his world view. Dreams from My Father

suggests a deep-seated belief that economic and social dynamism inevitably and unrelievedly produce chaos, disorder, and despair. Here's a heart-felt and disturbing passage:

Before we left, Angela asked about the possibility of part-time work for the youth in Altgeld [a housing project]. Mr. Foster looked up at her like she was crazy.

"Every merchant around here turns down thirty applications a day," he said. "Adults. Senior citizens. Experienced workers willing to take whatever they can get. I'm sorry."

As we walked back to the car, we passed a small clothing store full of cheap dresses and brightly colored sweaters, two aging white mannequins now painted black in the window. The store was poorly lit, but toward the back I could make out the figure of a young Korean woman sewing by hand as a child slept beside her. The scene took me back to my childhood, back in the markets of Indonesia: the hawkers, the leather workers, the old women chewing betelnut and swatting flies off their fruit with whisk brooms.

I'd always taken such markets for granted, part of the natural order of things. Now, though, as I thought about Altgeld and Roseland, Rafiq and Mr. Foster, I saw those Djakarta markets for what they were: fragile, precious things. The people who sold their goods there might have been poor, poorer even than folks out in Altgeld. They hauled fifty pounds of firewood on their backs every day, they ate little, they died young. And yet for all that poverty, there remained in their lives a discernible order, a tapestry of trade routes and middlemen, bribes to pay and customs to observe, the habits of a generation played out every day beneath the bargaining and the noise and the swirling dust.

It was the absence of such coherence that made a place like Altgeld so desperate, I thought to myself; it was that loss of order that had made Rafiq and Mr. Foster, in their own ways, so bitter. For how could we go about stitching a culture back together once it was torn? How long might that take in this land of dollars?

Longer than it took a culture to unravel, I suspected. I tried to imagine the Indonesian workers who were now making their way to the sorts of factories that had once sat along the banks of the Calumet River, joining the ranks of wage labor to assemble the radios and sneakers that sold on Michigan Avenue. I imagined those same Indonesian workers ten, twenty years from now, when their factories would have closed down, a consequence of new technology or lower wages in some other part of the globe And then the bitter discovery that their markets have vanished; that they no longer remember how to weave their own baskets or carve their own furniture or grow their own food; that even if they remember such craft, the forests that gave them wood are now owned by timber interests, the baskets they once wove have been replaced by more durable plastics. The very existence of the factories, the timber interests, the plastic manufacturer, will have rendered their culture obsolete; the values of hard work and individual initiative turn out to have depended on a system of belief that's been scrambled by migration and urbanization and imported TV reruns. Some of them would prosper in this new order. Some would move to America. And others, the millions left behind in Djakarta, or Lagos, or the West Bank, they would settle into their own Altgeld Gardens, into deeper despair.

Obama's memoir is not a policy tome or a campaign biography but an emotional journey. It does not offer alternatives, only bleak observations and predictions. It is pessimistic, conservative, nostalgic. The theme running through Dreams from My Father is the search for order, for stability, for roots in an undisturbed pre-modern culture. How that yearning for stasis translates into presidential policy is not clear, but I worry. But then I have no nostalgia for the order into which my grandparents were born--even though the old factories have moved away and people no longer grow their own food.

No Sex in the City?

The DMN's Paige Phelps wonders why there's no sex in Sex in the City: "The clothes became the sex. Which isn't as interesting to me as, say, the sex." (I haven't seen the movie and have pretty much decided to catch it on HBO.)

The Paradox of Timeless Fashion

Discussed in my short Current piece on Yves Saint Laurent on The Atlantic's website.

Andrew Sullivan is plugging this short LA Weekly piece suggesting that Obama's candidacy might help defeat the anti-gay marriage amendment on the ballot this fall in California. I hope so, but the piece manages to avoid an obvious contradiction: Blacks are overwhelmingly opposed to gay marriage and supportive of the initiative, so much so that gay marriage supporters are essentially writing them off and concentrating on Latinos as potential swing votes. If Obama comes out forcefully against the amendment--as he should--his African-American base in California and elsewhere won't like it. But he can easier buck them than, say, Hillary could.

(In case you missed it, here's my article on Obama's glamour.)