Just in case you thought the "stimulus package" was about the general welfare, here's a reminder that it's really about payoffs to politically powerful labor unions.

The stimulus bill passed by the House last night contains a controversial provision that would mostly bar foreign steel and iron from the infrastructure projects laid out by the $819 billion economic package.

A Senate version, yet to be acted upon, goes further, requiring, with few exceptions, that all stimulus-funded projects use only American-made equipment and goods.

Proponents of expanding the "Buy American" provisions enacted during the Great Depression, including steel and iron manufacturers and labor unions, argue that it is the only way to ensure that the stimulus creates jobs at home and not overseas....

Nations including China and many in Europe are preparing to spend billions of dollars of taxpayer money on stimulus projects. American companies are angling for a piece of those pies, and retaliatory measures against U.S. companies, executives argue, could significantly complicate those efforts. This week, a European Commission spokesman threatened countermeasures if the Buy American provisions are approved.

"There is no company that is going to benefit more from the stimulus package than Caterpillar, but I am telling you that by embracing Buy American you are undermining our ability to export U.S. produced products overseas," said Bill Lane, government affairs director for Caterpillar in Washington. More than half of Caterpillar's sales -- including big-ticket items like construction cranes and land movers -- are sold overseas.

Opponents, including some of the biggest blue-chip names in American industry, say it amounts to a declaration of war against free trade. That, they say, could spark retaliation from abroad against U.S. companies and exacerbate the global financial crisis.

At a Morons Society gathering last weekend, I was on a panel discussing the economy. One of the questions during the Q&A made me realize that there's a widespread misconception out there about the stimulus package: People think this is a WPA-style plan to employ people off the streets. Now if you're going to lavish tax money on infrastructure projects, I'll concede it makes good sense to use trained construction workers, not random day laborers. But politically it's still a union payoff. And there's no public-spirited reason to overpay for materials (or, for that matter, for labor).

But the cost to taxpayers isn't the biggest problem with the bill's protectionism. A trade war threatens to exacerbate the single largest danger in the worldwide downturn: that a serious contraction in China will lead to domestic unrest and that that the Chinese government will engage in military aggression to focus frustration outward.

A new Atlantic site (technically a channel, or subset of the main site), edited by Megan McArdle. Check it out.

As part of The Atlantic's State of the Union lineup, I chatted via instant messaging with Shannon Brownlee, author of Overtreated: Why Too Much Medicine Is Making Us Sicker and Poorer

. Read the (slightly cleaned up) conversation here. An excerpt:

VIRGINIA POSTREL: However you pay for it, the cost of health care won't go away. The fundamental question is the one you started with: Where do we get the incentives and feedback we're used to in other industries? I don't want to overemphasize this, but one problem is simply that patients expect health care to be free to them. Why don't I pay my primary care physician like I pay my hairdresser or plumber and save insurance for very expensive, unexpected events like cancer? (I'm ignoring the issue of chronic disease, which is a serious one, for the moment.)

SHANNON BROWNLEE: Returning to your previous comment about patients shopping around, I can only think that people who argue that the ill should be able to control their own care can't possibly know any really sick people. In particular, they can't possibly know anybody with a complex, chronic illness — which is, of course, just the kind of patient who is costing us the most money.

VIRGINIA POSTREL: People don't necessarily want their primary care physician coordinating their care. In fact they hate it when HMOs make them gatekeepers. But they want SOMEONE coordinating. Maybe we need more use of the role you see with transplant coordinators for kidney transplants — a highly organized physician's assistant (at least when I was a donor) who makes sure everyone gets what they need and the patient stays in the loop.

SHANNON BROWNLEE: I think that's a perfectly reasonable model — pay out of pocket for primary care, either on a per visit basis or per month, and then have catastrophic care. There are a couple of problems with this model, however. 1) A lot of people don't have the money to pay for frequent visits to their PCP. 2) Patients aren't particularly rational about the way they decide what's needed and what isn't. Probably a better model is the capitated, per month payment.

"We can save the banks as institutions and restart lending without a massive transfer of money from taxpayers to investors and bankers, and here is how."

A must read. [Via Greg Mankiw.]

UPDATE: More advice from the indispensible Luigi, with Alberto Alessina.

From the Ridiculous to the Sublime

On the other hand, their wares are unprofessional-looking germ carriers.

Ah, the Golden Days of Flight

They're back, thanks to a collapse in ticket sales. When I flew Southwest to and from San Jose last week, I had three seats to myself, even though in one case I was the very last person on the plane.

Be careful what you wish for--empty planes, lower credit card balances, less shopping. You just might get it. 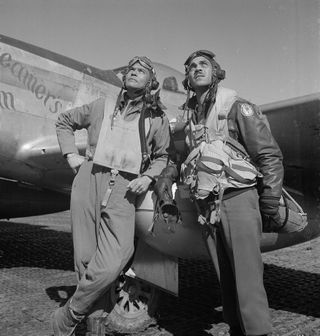 With the Tuskegee Airmen headed to the inauguration, let's take a moment to remember what they looked like when they were young and glamorous--and, of course, just how subversive that glamour was. The airmen were not just warriors but aviators, the epitome of masculine modernity: brave and daring, yes, but also masters of complex machines, with all the discipline and intelligence that implied. Their very existence refuted the ideology of white supremacy.

In April 1945, the Airmen were photographed by Toni Frissell, a noted fashion and society photographer (she did the photos at Jack and Jackie's wedding). Frissell knew glamour and, unlike many of her contemporaries, she didn't need a studio or heavy retouching to create it. Her photos of couples cuddling in the park are as appealing as her shots of models on the steps of the Jefferson Memorial. And she loved natural light.

Frissell was the ideal photographer to capture the Tuskegee Airmen for posterity. As this DG slideshow illustrates, she captured the glamour--and dignity--of these young men, whether posed looking skyward, working on engines, listening to briefings, playing cards, or receiving "escape kits" of cyanide. And, presumably for hometown newspapers, she noted their names and hometowns, which are included in the slideshow captions.

Not all the aviators will make it to the inauguration, of course. Many, indeed, never made it home from the war--something I was reminded of when Googling Ronald Reeves, the Blair Underwood lookalike in a few of the photos.