Naomi Wolf and the Phenomenology of Angelina Jolie

Unlike Paskin, I do not regard Wolf as "a serious feminist and thinker." She's a feminist, certainly, but neither serious nor a thinker. She is an emoter, whose work typically generalizes from her narcissistic neediness to "the female experience." It is usually an intellectually frivolous approach.

But this time it works brilliantly, though not in the way Wolf intends.

Read the rest at DeepGlamour. 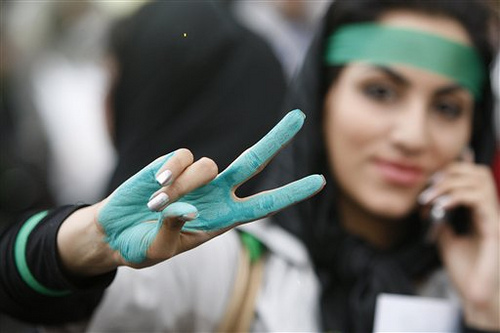 Courtesy of Flickr user .faramarz, who has many, bloodier photos from the protests.

In 1898, Nym Crinkle (the pen name of Andrew C. Wheeler) made the following prediction for a century hence. He was only 20 years or so off the mark:

Every person of fairly good education and of restless mind writes a book. As a rule, it is a superficial book, but it swells the bulk and it indicated the cerebral unrest that is trying to express itself. We have arrived at a condition in which more books are printed than the world can read. This is true not only of books that are not worth reading, but it is true of the books that are. All this I take to be the result of an intellectual affranchisement that is new, and of a dissemination of knowledge instead of concentration of culture. Everybody wants to say something. But it is slowly growing upon the world that everybody has not got something to say. Therefore one may even at this moment detect the causes which will produce reaction. In 100 years there will not be so many books printed, but there will be more said. That seems to me to be inevitable.

The search is on.

Plus Sizes: The Big Picture

The malls are empty, and retailers are crying for customers. American women are getting heavier by the day. Yet stores like Ann Taylor and Bloomingdale's, and lines including Liz Claiborne and Ellen Tracy, are slashing their plus-size offerings — turning away potential sales and generating angry denunciations of "sizeism." What's going on?

As I explain in this article on Double X, the new women-oriented spinoff of Slate, there's a perfectly rational explanation that doesn't require an animus toward larger women. It does require graphs to explain, however, and The Washington Post, owner of Double X and Slate, has saddled the ladies with a design that can't handle more than one graphic per article, let alone multiple bar charts.

Here at DG, however, we have an ace technical and design staff. So here are the missing pictures, courtesy of David Bruner at TC[2]. (Click to see the full-size version.) 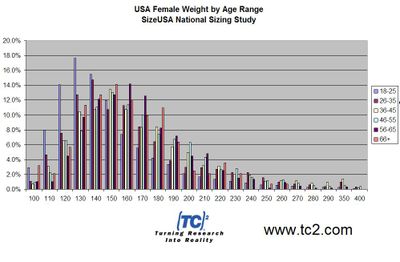 Height, by contrast, looks more like a bell curve. 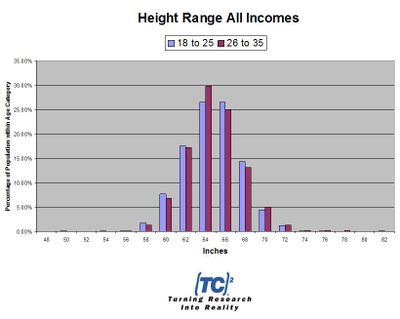 Here are weights for the same two age groups: 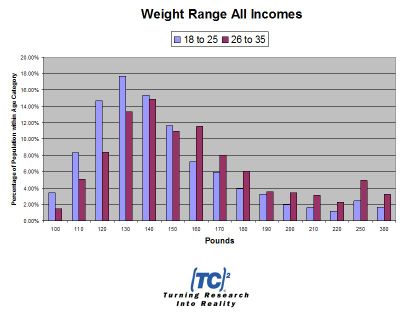 The state is in fiscal collapse, so the California legislature is doing what it does best--finding new things to regulate. The latest a vegetable mandate for day care center lunches. The LAT's Mary MacVean reports:

The Assembly has passed a bill to set minimum standards for food in licensed child-care centers, requiring a vegetable to be part of lunch and supper and forbidding whole milk for children 2 or older....

The bill, which passed the Assembly on Wednesday by a 48-27 vote, now heads to the Senate.

If it becomes law, AB 627 would require low-fat or skim milk to be served to children 2 years old and older. It would limit sugar in cereals and eliminate deep frying and sweetened drinks. It also would establish an 18-month pilot project to evaluate stronger nutrition and physical activities standards.

Next up: a bill to force the kids to eat those vegetables.

Sneaking in Command and Control

The WaPost notes that the "cap-and-trade" bill sponsored by Henry Waxman and Edward Markey is, in fact, loaded with all sorts of direct federal regulation of a decidedly dictatorial command-and-control nature.

In fact, the bill also contains regulations on everything from light bulb standards to the specs on hot tubs, and it will reshape America's economy in dozens of ways that many don't realize.

Here is just one: The bill would give the federal government power over local building codes. It requires that by 2012 codes must require that new buildings be 30 percent more efficient than they would have been under current regulations. By 2016, that figure rises to 50 percent, with increases scheduled for years after that. With those targets in mind, the bill expects organizations that develop model codes for states and localities to fill in the details, creating a national code. If they don't, the bill commands the Energy Department to draft a national code itself.

States, meanwhile, would have to adopt the national code or one that achieves the same efficiency targets. Those that refuse will see their codes overwritten automatically, and they will be docked federal funds and carbon "allowances" -- valuable securities created elsewhere in the bill that give the holder the right to pollute and can be sold. The Energy Department also could enforce its code itself. Among other things, the policy would demonstrate the new leverage of allocation of allowances as a sort of carbon currency -- leverage this bill would be giving to Congress to direct state behavior.

The editorial hints that these sorts of provisions have been inserted because the bill's authors are counting on fellow members of Congress not to read what they're voting on. They undoubtedly remember how easy it was to get Congress to ban incandescent light bulbs by sneaking a provision into the Bush-era energy bill.

After my Medicare First meme bounced around the blogosphere (thanks, Glenn, for the initial link), I got an email from Peter Orszag at OMB, asking to chat. His major points in our subsequent phone conversation:

1) The administration does have big Medicare changes planned, both immediate cuts in reimbursements and "game changers" to impose more scientific management, potentially realizing savings down the road.

2) "I hope I'm not making anything sound like they're painless." There are going to be "hard, CBO-scored cuts" in Medicare, "mostly involving provider payments." The administration is proposing cutbacks in home-health care and Medicare Advantage payments, for instance. It isn't expecting to get its initial savings from better management.

3) Medicare First--changing Medicare and waiting to see how it works before messing around with the rest of the health care system--won't work politically. "I don't think you're going to get these aggressive changes in Medicare unless you do some coverage expansion now." The AARP, for example, has said it will accept significant changes in Medicare only if the money goes to expanding coverage.

1) Unlike critics (including me), Orszag does not regard the administration's plans as a significant change in the health care system because "you're keeping employment based insurance in place and you're adding coverage in way that can be dialed up or down."

2) He's not particularly interested in my personal obsession, the effects of centralized controls on long-term medical innovations, which may require very modest incremental improvements that cost a lot but lead to bigger improvements later.

3) The administration is beginning to realize that it overreached when it tried to spin health-care reform as a free lunch.

"Funemployment" Is an Interesting Phenomenon

But how do these happily out-of-work people pay their bills? Isn't that a basic question reporter Kimi Yoshino should answer before leaping into discussions of "narcissism" and the "generational shift"? What makes funemployment financially possible? Are these people living on savings? Spouses? Credit cards? In a market full of (f)unemployed journalists, a paid reporter ought to cover the basics.

UPDATE: I'm embarrassed to say that I read over the explanatory clause. Reader Jens Fiederer points out the relevant sentence: "Buoyed by severance, savings, unemployment checks or their parents, the funemployed do not spend their days poring over job listings." I would still like more details. Many recession articles implicitly demonstrate what a rich country this is, but this one does it more explicitly than most. I owe Kimi Yoshino an apology for being snarky about an interesting story.

In a remarkably disingenuous report, the Council of Economic Advisers assumes the can opener of easily reduced health care costs. One crucial argument, illustrated by this map, is the presumed waste represented by disparities across Medicare regions (click for a larger view):

These large differences in spending suggest that nearly 30 percent of Medicare's costs could be saved without adverse health consequences. If these patterns are consistent with the experience of other populations, such as Medicaid enrollees and the privately insured, then it should be possible to cut total health expenditures by about 30 percent without worsening outcomes. Since we currently spend approximately 18 percent of our GDP on health care, a 30 percent reduction in expenditures would again suggest that savings on the order of 5 percent of GDP could be feasible.

"Nearly 30 percent of Medicare's costs could be saved without adverse health consequences."

The report also suggests that we know what the problems are, listing the usual suspects:

We spend a substantial amount on high cost, low-value treatments.

Patients obtain too little of certain types of care that are effective and of high value.

Patients frequently do not receive care in the most cost-effective setting.

There is extensive variation in the quality of care provided to patients.

There are many preventable medical errors that lead to worse outcomes and higher costs.

Our system is complex and we have high administrative costs.

Think about this for a moment. Medicare is a huge, single-payer, government-run program. It ought to provide the perfect environment for experimentation. If more-efficient government management can slash health-care costs by addressing all these problems, why not start with Medicare? Let's see what "better management" looks like applied to Medicare before we roll it out to the rest of the country.

This is not a completely cynical suggestion. Medicare is, for instance, a logical place to start to design better electronic records systems and the incentives to use them. But you do have to wonder why a report that claims that Medicare is wasting 30 percent of its spending thinks it's making a case for making the rest of the health care system more like Medicare.

UPDATE: Thanks to reader Colin Gilboy for pointing me to this New Yorker article, which fleshes out the aggregate data with reporting from McAllen, Texas, which has some of the highest Medicare expenses in the nation--much higher than very similar El Paso. If Medicare can't fix McAllen, why think a similar program will fix the country?

ADDENDUM: A physician who asks not to be named writes:

I put a plate on a distal radius today. Fifteen years ago, I may have used a cheaper technology, an external fixator or reducing and pinning it. Open reduction and internal fixation of distal radius (wrist) fractures gives the best result and it is because of significant improvement in plate and screw design and manufacture (and better surgical technique, if any credit in America can go do physicians). This is on small problem that can lead to significant disability and pain. Multiply by every medical and surgical condition. Under a government controlled healthcare system, how much improvement will follow? Where will be the evidence for "evidence based medicine" when a green eyeshade guy is determining whether new technology can be used? If everyone is happy with healthcare in 2009, performed at the lowest per capita cost that can be managed, then go for Obamacare. If you think there might be significant improvements in the future, realize Obamacare will be an abortion. Doctors will do their best with whatever system we get, but we are not driving this. If it is a poor system that we get from the government, expect a worse future for medical care. Thanks for letting me vent.

On this issue, see my Atlantic column on cancer drugs and the followup response to letters.

MORE on the MAIN BLOG PAGE