I am convinced this much-too-conveniently-antisemitic email is a self-serving fake. Why? Because it smells way too much like this, this, and this (among many others). Maybe I'm wrong, but conservatives should know enough to be skeptical.

UPDATE: In response to a couple of inquiries, yes, I DO think the hoax originated at ALG and that the burden of proof should be on them to demonstrate that it did not. That demonstration would need to involve an uninvolved, trustworthy, and technically savvy third party.

Support FIRE. Buy a ticket, for yourself or a student guest, at FIRE's 10th Anniversary Gala.

Glamour in The Wizard of Oz

Old Hollywood glamour is Jean Harlow lounging suggestively in a white satin gown or Fred Astaire sweeping Ginger Rogers across a ballroom floor; Rita Hayworth peeling off long black gloves or Greta Garbo staring mysteriously off to sea. It is decidedly not a gingham-clad, jolie laide farm girl and her scrappy little dog. Dorothy, Toto, and their companions may be beloved — familiar family friends introduced by each generation to the next. In our fond memories, however, they do not qualify as glamorous.

But now that The Wizard of Oz

, it is time to reassess. The Wizard of Oz is actually one of the studio era's most emotionally sophisticated explorations of glamour. It does not offer us a luxuriously attired starlet or languid, sexy scenes. Instead, the movie shows us how glamour works. Glamour offers a lucid glimpse of desire fulfilled — if only life could be like that, if only we could be there, if only we could be like them, if I only had a ...

In The Wizard of Oz, the principal characters aren't the objects of glamour. They're its audience: the dreamers who imagine their lives transformed and who learn, over the course of the film, that even illusions can reveal inner truths.

Read the rest on DoubleX.

The Wizard of Oz will be shown in theaters on Wednesday evening. For information on locations and tickets, click here.

At the end of my PJTV appearance on Glenn Reynolds's show last month we discussed what the dialysis and transplant system might tell us about the national health care debate. (Click on "Lessons from Kidney Donation" to go to that part of the video.)

The two lessons I drew:

1) A fiscal explosion is more likely than tight (or "rational") rationing.
2) Under a uniform system, inertia tends to set in, so that technologies and practices don't improve, even when better ones are available.

Only 8% of U.S. dialysis patients treat themselves at home. The vast majority of the more than 350,000 Americans on dialysis are treated in centers, where three treatments a week, three or four hours each, is the norm — not because it's optimal but because that's the way it has been done for nearly four decades.

A growing body of evidence suggests that longer and/or more frequent dialysis treatments, either at home or in a dialysis center, are far superior to the status quo. Although the USA spends more per dialysis patient than other countries, that does not result in higher survival rates or even, many argue, a better quality of life.

"The standard of care is really inappropriate," says Brenda Kurnik, Lustman's doctor, who practices in Marlton, N.J. "Basically, it prevents people from dying, and that's about all it does."

So why doesn't the USA do better? Many blame Medicare's End Stage Renal Disease Program. Launched in 1973, it's the only federal program that entitles people of all ages to health-care coverage on the basis of a single diagnosis: chronic kidney failure. By paying for lifesaving care for hundreds of thousands of Americans, the program is a testament to what health insurance reform might achieve if Congress were to adopt it.

But it also may be a cautionary tale: Its cost has far exceeded initial projections, and some doctors and other analysts question whether Medicare get its money's worth and whether patients get the best treatment. Less than one-quarter of dialysis patients ages 18 to 54 are well enough to work or go to school.

As I've argued before, we already have a large, government-run health care system called Medicare, which suffers from plenty of well-known inefficiencies. Before doing anything else, government reformers ought to work on improving it. Medicare First!

Has Obama Lost His Glamour?

Glenn Loury and I discuss that question, as well as health care and public school kids as captive audiences, on Bloggingheads.tv.

I wrote about Barack Obama's glamour here (not my headline) during the campaign and here (briefly) after the election.

I discussed drug rationing in this Atlantic column and this response to readers' letters.

Terror & Glamour in The Baader-Meinhof Complex 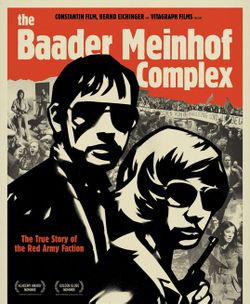 Christopher Hitchens, writing in Vanity Fair, called the movie "the year's best-made and most counter-romantic action thriller." Others have been less approving. The LAT's Kenneth Turan deemed it "an exploitation film on a socially conscious subject, the equivalent of Steven Soderbergh's 'Che' having a love child with 'The Fast and the Furious.'" When it was released in Germany last fall, some felt it was "a little too sexy for comfort" and trafficked in "terrorist-chic."

"The film portrays one murder after another without any sense of meaning, any explanation," Ulrike Meinhof's daughter Bettina Röhl, who was abandoned to a Palestinian orphanage by her terrorist mother, complained in an interview with the Associated Press. She said that "in nonverbal but very suggestive ways, the film insinuates that their motivations for terrorism are understandable."

"Terror is glamour," said Salman Rushdie in a 2006 interview with an incredulous Der Spiegel reporter. It was an astute observation. "The suicide bomber's imagination," he noted, "leads him to believe in a brilliant act of heroism, when in fact he is simply blowing himself up pointlessly and taking other people's lives." What The Baader-Meinhof Complex reminds us is that the glamour of terrorism extends not only to those who actively engage in such violent acts but to the broader public that admires or justifies those actions.

Consumerism is equated with Fascism so that the firebombing of department stores can be justified. Ecstatic violence and "action" become ends in themselves. One can perhaps picture Ulrike Meinhof as a "Red" resister of Nazism in the 1930s, but if the analogy to that decade is allowed, then it is very much easier to envisage her brutally handsome pal Andreas Baader as an enthusiastic member of the Brownshirts.

He was barely 20 years old, munching popcorn and wearing a hooded jumper. The assiduously factual debunking of the "Baader-Meinhof myth" obviously did not work for everyone in the audience. 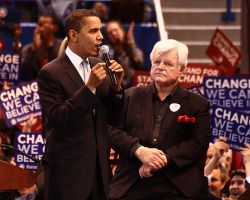 Read the rest of my column at Forbes.com. During the campaign, I wrote this piece about Obama's glamour.