Fashion: How Amazon Can Make It Work 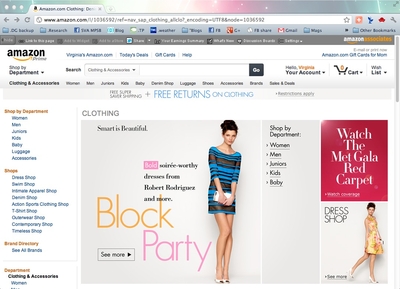 My latest Bloomberg View column suggests some ways Amazon might overcome fashionista skepticism about its plans to move beyond its traditional apparel offerings into higher-end fashion. Here's the opening:

When I caught Jeff Bezos's eye at the press preview for the Metropolitan Museum of Art's new Costume Institute exhibit, which Amazon.com Inc. sponsored, his face burst into an enormous smile. I'd like to think this was because the Amazon chief executive officer likes me so much. (We see each other socially on rare occasions.)

But I suspect he was mostly glad to see anyone he recognized. We were probably the only two people in the room who could tell you who Linus Torvalds is, or Myron Scholes: two nerds, however grown-up and pulled together, in a crowd of fashionistas.

Amazon is an unlikely sponsor for a Costume Institute event, and Bezos an exceedingly unlikely fashion advocate. "Before we got involved, this event wasn't on my radar at all," he said of the museum's celebrity-filled annual gala.

But his company is trying to get into high-end fashion retailing, and sponsoring the Met exhibit and the fashion world's party of the year is a good way to get attention. If nothing else, it gets Bezos and Vogue Editor-in-Chief Anna Wintour speaking on a first-name basis.

A cultural gap remains, however. "It could never be cool to shop for fashion at Amazon.com. Geek cooties will come attached to your clothes," an early commenter said about Monday's New York Times story on Amazon's foray into fine fashion. Another wrote, "Do you want to be cool or pay the lowest price? Your decision." The Times story ended with a jab at Bezos for not knowing the brand of his own shirt or shoes -- and for letting a tacky ID badge dangle from his Prada jeans.

Net-a-Porter has already demonstrated that you don't have to be a flash-sale site to sell high fashion online. So have the websites of department stores such as Neiman Marcus and Saks Fifth Avenue. In the specialized vintage market, so has 1stDibs. The problems of presentation and fit can be overcome.

The real question is the cultural one: How can a middle- brow company like Amazon become a credible source of fashion rather than merely apparel? Here are a few ideas the company might consider:

Read the rest on Bloomberg View. 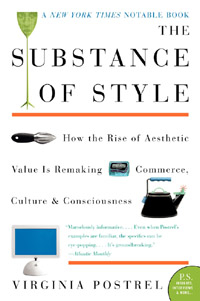 The first week's results are in, and the $2.99 e-book sale on The Substance of Style

has been so successful that it's going to last until the end of the month (but no longer!). The publisher reports that we sold more than 900 copies in a week, compared to the usual two or so. Prices do matter. So does giving people "an excuse and a deadline." And so does the publicity.

Thanks particularly to InstaPundit, Tyler Cowen at Marginal Revolution (who also has a substantial review of the book on the Amazon site), Nick Gillespie at Reason, and Manolo the Shoeblogger for spreading the word. And thanks to everyone who follows me on Twitter for your patience with my repeated tweets on the subject.

Here's the Amazon link. Here's the Nook link. I believe it is also on sale in the Apple store.

Recycling Eyeglasses Is a Feel-Good Waste 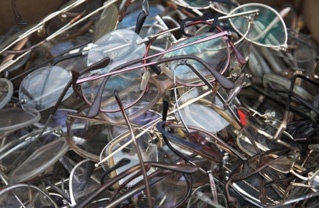 My new Bloomberg View column looks at the false economy of recycling eyeglasses. Here's the lead:

One of the public libraries I use regularly has a box where people can donate their old eyeglasses. Whenever I see it, I regret having nothing to contribute. That's because I've let my personal experience trump my economic good sense.

I have a special appreciation for just how valuable glasses can be when you can't see.

I spent the third grade borrowing glasses from the girls who sat on either side of me. The ophthalmologist had advised my parents to wait to get me glasses, because my eyes were bound to change and they'd just have to buy a second pair. (We were not poor -- my father was an engineer -- but the doctor was a paternalist of the old school.) By the time I got my first pair of glasses, the only thing I could read on the eye chart was the big E.

I've long since had my myopia surgically corrected -- the proverbial miracle of modern medicine -- and now stash cheap over-the-counter reading glasses in every room of my house. Still, I remember what it was like to need glasses and not be able to get them. So I sympathize with charities that collect eyeglasses to distribute to people who can't otherwise afford them.

But such efforts turn out to be a terrible waste, for reasons that are completely logical once you think about them. The case of recycled eyeglasses illustrates how easy it is to fool ourselves when we think about thrift, waste and charity. We overestimate the importance of the physical things we can see and forget about the real costs of time and attention, as well as the importance of intangible values like aesthetics to the people we're trying to help.

In response, my friend (and Bloomberg View colleague) Adam Minter, who does great reporting on the scrap business in China and is writing a book on the subject, emails:

One of the themes that I'm hitting very hard in my book is that recycling is a fundamentally economic activity. Nobody sorts somebody else's garbage for free. Most of the developing world understands that, while the developed world - the EU and US, in particular - seems intent on seeing recycling as a moral activity (and a means of tribal identity) above all else. Unfortunately, when people view waste and recycling in moral terms, rather than economic ones, they have an unerring tendency to demand local governments set up recycling programs that are destined to lose money from the get-go (like curbside recycling in spread-out Houston). Meanwhile, the folks who know how to make money from recycling, like scrap yards, are denigrated and often subjected to totally unreasonable barriers to entry (and exit). Seems like similar dynamics at play in the glasses trade (with some obvious differences).

It's interesting, too, how much of your piece reflects the overall dynamics of the global recycling trade. Shipping and sorting costs are THE determining factors for whether and where something is recycled - whether it be a bale of old cardboard, or pieces of shredded American automobiles (bound for China). Nice reminder for me how the rules of the road, if you will, are uniform up and down the waste trade.