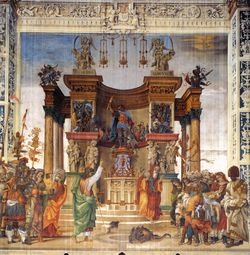 Florentine authorities and residents were appalled when the cast of MTV’s “Jersey Shore” invaded the Tuscan capital for the show’s fourth season, which will debut Aug. 4. What were Snooki and The Situation doing associating themselves with the refined city of Dante and Botticelli (not to mention Ferragamo)? Even New Jersey won’t claim these louts.

The ostensible idea was to pay homage to the cast members’ Italian heritage. But these hyper-American descendants of peasants from Italy’s far southern regions hardly represent the Florentine heritage of art, humanism and elegant style. Nicole “Snooki” Polizzi and Jennifer “JWoww” Farley aren’t even of Italian descent. The cast’s Florence connection is quite a stretch.

But stretching, it turns out, puts them in a great Florentine tradition. Brand-building through misleading images wasn’t invented on Madison Avenue or Hollywood. Many of Florence’s Renaissance treasures are monuments to exaggeration for the purposes of self-promotion. The medium may have changed, but the motives haven’t. It’s a bit of history that today’s Wall Street billionaires, who have a bit of a collective image problem, might want to study.

The Renaissance patrons who paid for all those frescoes, paintings, altar pieces and sculptures weren’t generally funding beauty for its own sake. They were buying status -- building their brands, we’d say today. Their patronage showed off their wealth and piety and, in many cases, advertised their supposed links to the prestigious and powerful. In the process, these patrons often shaded the truth, leaving out unflattering facts and suggesting associations they didn’t in fact have.

Know what to look for and Florentine artworks reveal secret messages that, while not as sexy as Dan Brown’s Mona Lisa fantasies, have the advantage of actually existing.

Take the boys shown walking up the stairs behind their tutor in Domenico Ghirlandaio’s fresco in the Santa Trinita church. What could these kids have to do with the “Confirmation of the Rule of Saint Francis,” the official subject of the fresco? They aren’t friars or church officials. 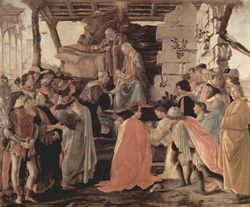 In fact, their portraits are just good public relations. The patron, a banker named Francesco Sassetti, included them to butter up their father, Lorenzo de’ Medici, and to let the churchgoing public know that he and Lorenzo were tight.

But the painting doesn’t tell the whole story. It “conveniently omits a crucial fact about the patron’s relationship with the Medici,” write art historian Jonathan K. Nelson and economist Richard Zeckhauser in their book, The Patron's Payoff

, which uses economic signaling theory to analyze Renaissance patrons’ motivations and techniques. That fact: “By the time he commissioned the fresco, Sassetti had nearly run the Geneva branch of the Medici bank into bankruptcy.” Oops. Maybe the portraits were meant as a distraction or damage control. How could you fire (or worse) a man who had sponsored such fine pictures of your kids?

Nelson and Zeckhauser’s work demonstrates that Renaissance art is full of status signals and calculated image-building -- once-obvious messages that today’s tourists never notice. Nelson, who is the art history coordinator at Syracuse University’s campus in Florence, showed me some examples at Santa Maria Novella, the church dedicated to the Virgin Mary that stands near Florence’s train station. (It was novella, or new, in the 13th century.)