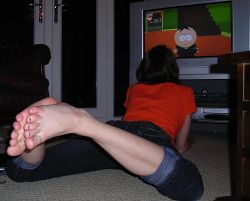 Finding a connection to glamour in this photo of a young woman watching South Park might at first glance seem difficult, but it’s there. She normally doesn’t watch television this close to the screen or in this position. She is multitasking, entertaining herself while she does an exercise to increase her turnout for ballet. Turnout is a rotation of the legs outward from the hips (not the knees or ankles) so that the feet ideally end up pointed outward 180 degrees from each other. (Here’s a short video explaining the face-up and face-down versions of the stretching exercise this young woman is doing.)

Many ballet exercises are done in turned-out positions. This video instructs a dancer how to plié (do knee bends) with the legs rotated outward. That turnout is an example of extraordinary artifice can be seen by imagining yourself doing the stretch the young lady is doing in the photograph below. 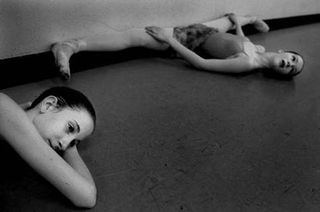 This young lady’s body position in this stretch is hardly graceful, but these stretching exercises are only a means to an end. These students are engaged in the kind of behind-the-scenes exercises that allows ballet dancers to appear on stage and make some difficult movements and body positions look easy. By stretching her body beyond a human’s natural flexibility, she is preparing to make superhuman feats of balance and leg extension appear almost effortless.

These odd looking exercises are thus a classic example of the hard work that is often necessary for sprezzatura. This lovely Italian word was invented by Castiglione in the 16th century to signify an ideal courtier’s sense of ease in performing tasks that most people would find difficult, thereby hiding the conscious effort that was required. (Kit’s post The Work Behind the Glamour set me thinking about this.) Sprezzatura applies wonderfully to ballet, given that ballet’s origins can be traced back to the late fifteenth-century Italian Renaissance courts as a dance interpretation of fencing. Ballet’s largely French vocabulary stems from its further development in the French court of Louis XIV in the 17th century. (The Italian word “balletto” became the French word “ballet.”)

Throughout its history, as first a formalized form of court dance, and then when further developed as theatrical dance, ballet dancers have always been aware that they are being watched. Ballet studios always have one mirrored wall so that the dancers can see themselves in that mirror as others would. Castiglione wrote that the ideal courtier should always be aware that he is being observed by others. 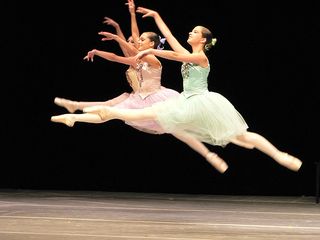 As these young ladies lie in their less than glamorous stretching positions, perhaps they  imagine themselves leaping as part of a group in a grand jeté, as seen in this photograph. (Executed perfectly, all three dancers would be in absolute unison in their leap position, which is very difficult to achieve, and is not quite the case here.) Notice that with each dancer the leading foot is pointed toward the ground to land on. The trailing leg has been turned out so that the top of the foot is turned toward the audience, giving that leg a beautiful line. (That a turned-out leg is not necessary to do a split can be seen in this vintage photo.) Perhaps while stretching, the dancers imagine themselves doing a grand jeté in perfect unision with their courtier partner, or doing a soaring solo leap as the evil black swan Odile in Swan Lake.

As ballet developed as theatrical entertainment, the techniques were amplified to be more legible from a distance. Just as opera singers developed techniques that allowed their voices able to project into a theater without amplification, so ballet dancers developed techniques that allowed their bodies to be maximally visible in a theater. Lincoln Kirstein, one of the founders of New York City Ballet, wrote that ballet was calculated for opera-houses and that the foot positions were developed for “the greatest frontal legibility.” British art critic Adrian Stokes wrote:

...“turning out” means that the dancer, whatever the convolutions of the dance, continually shows as much of himself as possible to the spectator. When he stands in the first position facing the front, we see his feet and his legs in profile. The ballet dancer is, as it were, extended. 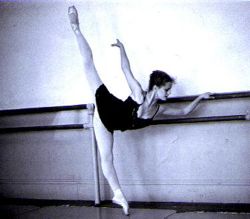 Turning out also opens up the body, exposing the inner thighs, and “open” is an adjective often used by writers when describing the aesthetics of ballet. Eric Stokes felt that turnout was crucial to the appearance of the lifted leg in doing arabesques. The dancer at left is practicing the arabesque penchée, a particularly difficult position. (Notice that the lifted leg is turned so that the top of the foot faces us, the audience. For those ladies whose mothers told them to keep their legs together, this position must seem astonishingly open and revealing.)

In performance there is always some awareness of the audience. As choreographer George Balanchine once chided one of his dancers, “Isn’t it selfish of you expect three thousand people to sit and watch you lift your leg if you’re not going to do it beautifully?” Assuming she can gracefully lift that nonsupporting leg, then a hard-working, extraordinarily talented ballerina might someday be cast as Princess Aurora in Sleeping Beauty. In one scene Aurora has four courtiers to help her display her extraordinary skills, as in this video of Viviana Durante. (Notice that her costume uses the short classical “pancake” tutu to openly and glamorously display her beautiful legs, as well as showcase the extraordinary balance and flexibility that all those hours of grueling work have perfected.)

[The photo of the dancer stretching while watching TV is “I am ungroundable, per se” © by Grack Attack, and used by permission. “Dancers stretching” used by permission of DanceHelp.com. The photo of the three dancers leaping is by Jeff Medaugh, and used under the Flickr Creative Commons License. The “Arabesque penchée” image is also from DanceHelp.com, which has numerous informative articles on dance technique.]

Posted by Randall Shinn on June 07, 2009 in Grace, Dance, Princesses