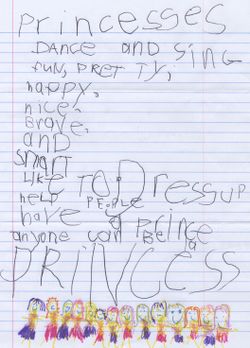 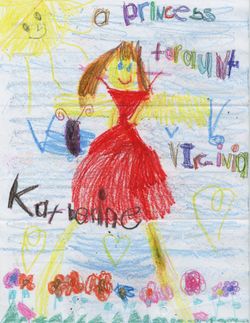 Princesses dance and sing
fun, pretty,
happy,
nice,
Brave,
and
smart.
Like to dress up
help people
have a prince
anyone can be a
PRINCESS.
That's the word from my feisty, princess-loving 5-year-old niece. Brave and smart! (And wearing a red dress.) Call me crazy, but that doesn't sound like a prescription for low self-esteem, pre-feminist underachievement, or a "lifelong struggle over her body image, a Hundred Years’ War of dieting, plucking, painting and perpetual dissatisfaction with the results."
And thanks for the responses to my previous princess post. Keep 'em coming (here, below, or, like Katherine's, in the mail).

Posted by Virginia Postrel on November 11, 2008 in Princesses

The Pre-School Glamour Of Playing Princess 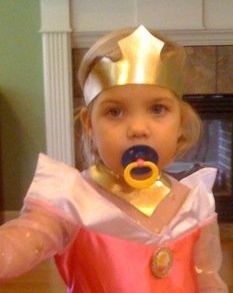 This glamour girl is my cousin's daughter Anna Margaret, age 2, dressed for Halloween--at her insistence--as Princess Aurora, a.k.a. Sleeping Beauty.
Why do little girls love to play princess? Yes, Disney has turned princesses into a multibillion-dollar business with thousands of products

. But the play long preceded the business. In fact, Disney's princess line was inspired by seeing girls lining up for a "Disney on Ice" show wearing their own non-Disney princess costumes. What is it about the idea of "princess" that so appeals to girls in a 21st-century republic? What does it mean to them to be a princess?
Peggy Orenstein's 2006 NYT Magazine story is the most in-depth examination of the question (and the business) that I've found. It's a good read, but ultimately unsatisfying. Orenstein brings too many political preconceptions to the topic and, while she quotes her princess-loving daughter to good narrative effect, she offers almost no information about what girls who play princess themselves think it means to be a princess. 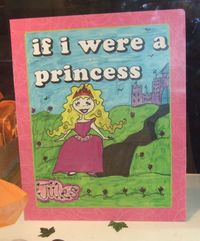 to superhero comics: "to express the lust for power and the gaudy sartorial taste of a race of powerless people with no leave to dress themselves."
For my book research, I'd like to hear from the little princesses themselves. Ideally, I'd find some brilliant, scientifically rigorous research by a child psychologist. But I haven't so far. So, since preschoolers are not the easiest interview subjects, I'm enlisting adults who know little princesses (preferably those older and more articulate than Anna Margaret) to ask them for me--Why do you like to be a princess? What does it mean to be a princess?--and write down the answers. If you know--or were--a little princess, I'd appreciate any answers you can send me, either in the comments, by email to virginia-at-deepglamour.net, or mail to 2355 Westwood Blvd., #362, Los Angeles, CA 90034.
The picture to the right is from a window display promoting a local outfit where kids can write and produce their own books. The only thing more glamorous than being a princess is being a writer.

Posted by Virginia Postrel on November 07, 2008 in Princesses, Children