Glamorous Outlaws: The Highwayman, Hero Of Song And Story

To travelers on dark English roads in the 17th and 18th centuries, highwaymen were dangerous criminals. But to the general public, before and after, these mysterious bandits, some of whom styled themselves as fallen gentlemen or Cavaliers, were glamorous figures. Ever since, they've been the subject of song and story.

The Beggar's Opera, featuring a love story surrounding the condemned highwayman Macheath, was a mega-hit when it debuted in 1728 and continues to be performed. (This video is from the 1983 version, featuring Roger Daltrey as Macheath.)

With all due respect to Adam Ant and Roger Daltrey, to me the highwayman will always be the romantic title character of Alfred Noyes' 1906 poem "The Highwayman," here set to music by Loreena Mckennitt.

Glamour, however, always conceals something, and in the case of glamorous outlaws, that something is often neither particularly attractive nor even impressive--as this debunking of Dick Turpin, one of Britain's most famous highwaymen, demonstrates. 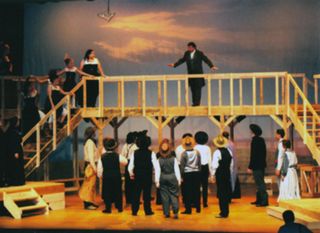 Digital special effects are now used so frequently in films and television that we tend to take them for granted. Photoshop is so widely used to manipulate digital photographs that we seldom notice the changes, sometimes even when “realistic” advertising photos have missing, wrongly sized, or misaligned parts. (The website Photoshop Disasters adds funny comments to miscalculated images.)

The theater has always dealt in illusions, and we are perfectly capable of imagining that a bare stage or an abstract set (such as the one shown in the photograph) represents a fictional world. Shakespeare’s plays were first performed on bare stages: thus the characters often speak of the time of day and place.

With experience we also sometimes take theatrical conventions for granted. A proscenium stage is described as having an invisible fourth wall through which the audience views the sets and action onstage. A movie or television screen serves much the same purpose. We forget that we are looking at a flat picture plane once we begin looking “through it” to see images that seem to have dimensional qualities. The addition of 3D further heightens our feeling that we are seeing a dimensional reality, rather than the illusion of one projected onto a screen.

Stage and screen illusions depend partially on an awareness that what the audience will be able to perceive is limited. The fourth wall, for example, does not reveal what is going on above, behind, below, or to the sides of the stage. Cameras reveal only what is in front of the lens, concealing even the person operating the camera.

When actors and dancers perform onstage, they know where the fourth wall is, and they sometimes “cheat” by turning their bodies enough to insure that their speeches and actions are audible and visible to the audience. Dance studios have large mirrors so that dancers can develop some sense of how their bodies, costumes, and movements will look to the audience. In film and photographic work, actors and models learn to maintain an awareness of where the camera is, as well as the light. 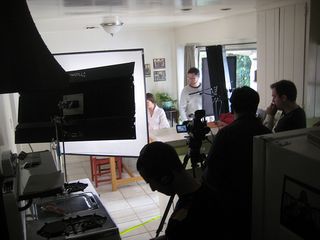 In most dramatic productions, the prevailing convention is that the actors act as if the audience is not there, even though actors need to retain some awareness of them. In most film situations, such as the dining room set shown in the photograph, it is impossible to ignore the presence of the equipment. The ability to perform effectively while aware of the presence of an audience, or a camera and a set full of equipment, is a difficult skill, but one that actors must master if we are going enjoy the fictional illusion that they exist in a “real” world.

[The abstract set was built for a production of Sara McKinnon, an opera by Mark Medoff and Randall Shinn. Photograph by Carol Shinn. The photograph “Film set in the dining room” is by Flickr user ricardodiaz11. Used under the Flickr Creative Commons license.]

Both men and women seem to recognize that a valuable fashion accessory can be the company of an attractive, well-attired member of the opposite sex. And if one item of arm candy helps proclaim one’s attractiveness, what about the effect of a bevy of them?

Musical theater has long understood and exploited this notion. In the 1957 film Les Girls Gene Kelly works with a troupe of 3 beautiful dancers. In the 1942 film Yankee Doodle Dandy James Cagney sings for a bevy of 16 belles wearing matching costumes. (See image number 22.) And in the same film Fay Templeton is admired by 8 nattily attired men. (See image number 37.)

Costuming one's bevy of admirers in matching outfits helps mark them as your entourage. In a 2005 Salzburg production of Verdi’s La Traviata, Anna Netrebko,  in a red dress, is surrounded by a large chorus, all of whom wear black suits. If you look closely you can see that many of those wearing suits are women, which only adds to the implication that she is attractive to all. 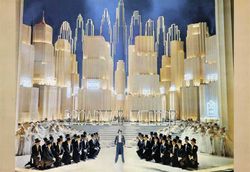 This image from Broadway Melody of 1938 suggests even greater sexual ambiguity. Thirty-two men in black top hat and tails kneel in admiration of Eleanor Powell, who is dressed in masculine, gray-blue top hat and tails. She stands in a feet-planted, legs-apart stance that body language experts call a crotch display. It is common stance for tough guys, but is seldom used by women (except superheroes). Of the 32 women whose eyes admire her, half already seem to have swooned, their dresses forming a lovely pattern. (See a superb large scan of this image here.)

Such over-the-top images almost parody themselves. By the time music videos came around, the entourage effect was ripe for post-modern reworking. In Robert Palmer’s  Addicted to Love video his band consists of five women who seem made up to resemble the stylized prints of Patrick Nagel. Clad in provocative versions of the simple black dress, these women wear neutral expressions. This leaves the tie-clad Palmer as the only person free to show facial emotion, his sexual attractiveness firmly established by his glamorous band.

Shania Twain parodied these images with her Man! I Feel Like a Woman! video. Her male band is strangely clad. Wearing what appears to be latex from the waist down, their upper bodies are showcased in thin stretch fabric. Better matched facially even than the women in Palmer’s video, they all wear swim goggles atop their forehead, perhaps a reference to a particular image of Nagel’s. The men seem to be stoic soldiers of glamour who know and accept their role as accessories. For brief periods they even disappear from the video. (And be sure to note Twain's stance.) 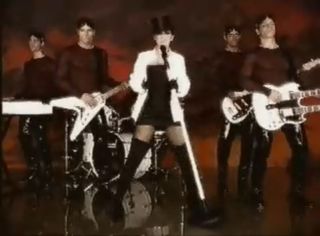 As a stage device the entourage effect can seem part of an entertaining fantasy. But perpetuated over time in real life (à la Hugh Hefner surrounded by living Barbie Dolls), it can devolve into a caricature that becomes unflattering to everyone involved.