Charismatic And Glamorous: A Rare And Powerful Combination 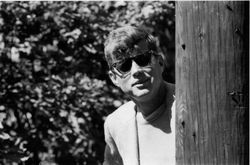 Commenting on the chart post below, Charles Oliver asks, “Are glamour and charisma necessarily opposites? Can a person not possess both at the same time?” His suggestion is, of course, correct, as the guy in the photo demonstrates. Glamour and charisma are not mutually exclusive, though the combination is rare, requiring a hard-to-maintain balance between warmth and distance, connecting with audiences without becoming overly intimate.

As I suggested in my earlier post, some charismatic performers develop glamorous public personas. They draw audiences into their roles but maintain an alluring mystery in their off-stage lives. Think of classic divas like Maria Callas.

Glamour depends on the audience, so a charismatic person may also be glamorous to some audiences but not to others. A few years ago I was in London and happened to catch a television special on Billy Graham's landmark 1954 crusade there. Like most successful preachers, Graham possessed considerable charisma. But it had never occurred to me that he might be glamorous. In the Bible Belt, where I grew up, he was simply too familiar. But here were British interview subjects talking about him as this tall, handsome representative of exotic American culture—not just a persuasive Christian evangelist but an evocative, mysterious, exciting contrast to austerity Britain. He was, in midcentury London, not just charismatic but glamorous.

Posted by Virginia Postrel on November 19, 2009 in Icons, Glamour Defined