According to Variety, the Coco Chanel bio-pic starts filming in Paris in September. Cute and cuddly Audrey Tautou ( last seen as a child of Jesus) will play the cute and notoriously not cuddly designer.

Chanel Solitaire, a 1981 film starring Marie-France Pisier, wasn't a huge hit, and explored her early love life, before she became a legend.

Taking no risks, this version won't go into her later life, either, perhaps for fear of those less attractive moments, such as in 1943, when she denouced her former Jewish business partners, the Wertheimers, to the Nazis, perhaps on the advice of her German lover, Hans Gunther von Dincklage. Later, arrested by the Resistance, she was released nearly immediately, and fled to Switzerland.  Since no one in France actually collaborated with the Nazis, this sort of sequence would be so difficult to film. She must have had vast amounts of charm--after the war, the Wertheimers re-negotiated their deal with her. 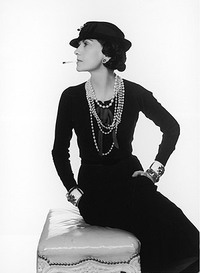 Chanel was her own best creation. She was a tough business woman, who thought about herself first and last.Make no mistake--she was a genius at design, marketing, and the making of an enduring image. She had no illusions about work, life, love or herself. Such a complex personality deserves better than a chick-flick.