DG’s subheading is “at the intersection of imagination and desire.” In his book Stein On Writing

, editor Sol Stein says of both fiction and non-fiction, “All storytelling from the beginning of recorded time is based on somebody wanting something.” When desire is acted upon so passionately that it defies common sense, we have the possibility of an exciting story.

“King’s wife runs off with foreign prince. War is declared.” So a contemporary tabloid might headline the act of passion that triggers the Trojan War, which Homer immortalizes in The Iliad, one of the first great works of literature in the Western world. (Ancient sources differ as to whether Helen left willingly or was abducted.) If we saw this headline today, we would want to know more. We would want to see photographs of Helen, said to be the most beautiful woman in the world.  If we did an Internet search, we might be surprised to learn that Helen is rumored to be illegitimate, the daughter of Leda and Zeus, the philandering God who (in another of his shape-shifting affairs) seduced Leda while disguised as a swan.

Passionate, ill-advised behavior can be the basis of a good story. The creators of fairy tales realized that the stakes needed to high in order to impress children with the consequences of good and bad behavior. This is true of high art as well. In Shakespeare and Opera

Gary Schmidgall writes that operas and Shakespeare’s plays are about how not to behave. The main characters are inevitably “slaves of passion,” and those characters who preach common sense are sure to be secondary. The plots of many of Shakespeare’s plays could be reduced to tabloid headlines. “Jealous husband kills wife, then himself” (Othello). “Wife convinces husband to commit murder” (Macbeth). “King forms new church to wed new wife” (Henry VIII).

Stein writes that, “Readers like to experience things in fiction that they would not want to experience themselves in real life.” The Internet allows us quickly indulge our our curiosity when we learn that famous people have behaved badly. We are curious when the news breaks that a beautiful actress is having an affair with the husband of another beautiful actress. Or when it is discovered that a trusted executive has embezzled millions of dollars. Or when it is learned that a supposedly upstanding athlete or politician has commented adultery.

Speaking again of fiction, Stein writes, that “Writers are troublemakers....Their job is to give readers stress, strain, and pressure....readers who hate those things in life love them in fiction.” And to some extent, we love to read about real-life stressful experiences, as long as they are happening to someone else. Regarding nonfiction, Stein comments, “In life we prefer an absence of conflict. In what we read, an absence of conflict means an absence of stimulation.”

The epic poetry of The Iliad used a tremendous cast of characters, from common soldiers to Olympian Gods, all of whom were capable of bad behavior. When kingdoms and empires were ruled by monarchs, the desire to rule led to horrendous crimes. Members of a royal families sometimes murdered each other by means ranging from poison to torture and execution. 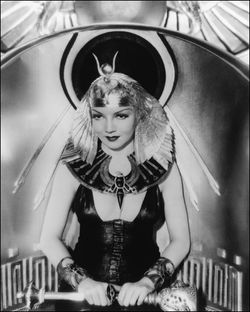 Cleopatra VII married two of her younger brothers in succession, conspired against both, and formed successive romantic, child-bearing relationships with both Julius Ceasar and Mark Anthony to consolidate her power. Cleopatra has fascinated storytellers for centuries, witness Shakespeare’s Anthony and Cleopatra and several films. (The photo at right is of Claudette Colbert as Cleopatra in Cecile B. DeMille’s 1934 film.) Part of our fascination with Cleopatra stems from her position linking different cultures, but we also are intrigued by her ruthless ambition and seemingly calculated ability to captivate men.

In contrast, the less-well-known 12th-century Welsh princess Nest ferch Rhys was apparently simply so beautiful that men were desperate to possess her, leading to disgraceful behavior on their part. After her father died, King Henry I of England appointed himself her “protector,” and his protection resulted in Nest bearing him a son. Henry then married her to one of his followers, Gerald de Windsor, and she bore him five children. Then her cousin Prince Owain met her, was smitten, attacked Gerald’s castle, and carried her off. This led to a local civil war which cost Owain’s father his lands. She bore Owain two sons. Eventually Gerald killed Owain, and Nest was returned. After Gerald died, another man took her as his lover, and she bore him a son. Imagine the tabloid headlines for various stages of that story.

There are no photographs of Helen, Cleopatra, or Nest to feed our curiosity; so for centuries artists have portrayed such women using their imagination and the standards of beauty in their time. The painting shown above of Helen of Troy is from the 19th century; the one below is from the 17th. Look at the admiring gaze Italian painter Guido Remi gave to Paris. 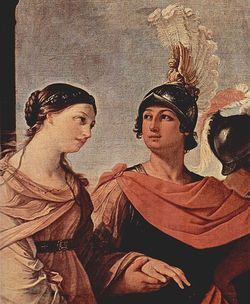 In films directors cast a beautiful actress in the role of Helen and hope that in onscreen action she proves charismatic. In the Renaissance, Helen’s beauty was captured in words. In Christopher Marlowe’s play Dr. Faustus, Faustus sells his soul to Mephistopheles. Before he is dragged to Hell, Fautus asks to see the legendary beauty, Helen of Troy. His wish is granted, and Faustus is captivated. Here is the beginning of his enraptured speech:

Was this the face that launch’d a thousand ships
And burnt the topless towers of Ilium?
Sweet Helen, make me immortal with with a kiss.
Her lips suck forth my soul: see where it flies!
Come, Helen, come, give me my soul again.
Here will I dwell, for heaven is in these lips,
And all is dross that is not Helena.

“And all is dross that is not Helena.” To a “slave of passion” consumed by an overwhelming desire, everything else can seem worthless. If such people risk everything else to pursue their desires, stories of their reckless actions may become the stuff of legends and artistic portrayals, or, more likely, tabloid headlines.

[The first Helen of Troy painting by Evelyn De Morgan. The second by Guido Reni. Both images are from Wikimedia Commons.]

Posted by Randall Shinn on December 22, 2009 in Celebrities, Art, Sex