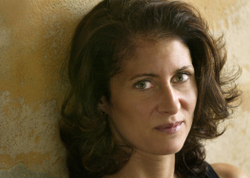 Nancy Rommelmann is a writer's writer. She somehow manages to combine the sharpest investigative scalpel with a compassionate heart, whether she's writing about a case of Munchhausen's by proxy, literary frauds, or the life of a movie star and her mom.

Over at her blog, readers are voting on her author photo, but we went with the classic.


DG: As a writer, you've seen both sides of glamour--the seedy and the soaring. How does that proximity affect your perception of glamour or the glamorous?

NR: As a writer, I am always trying to look past what’s presented to the intent, and I think glamour is all about intent. The most glamorous person I recall from my childhood in New York City in the late 60s/early 70s – besides my mother, who wore Emilio Pucci and paper dresses and skintight silver pantsuits with Pop-Art sunglasses, her long black hair professionally wrap-set each week on West 57 th Street – was a mad woman who used to wander the streets of Brooklyn Heights at night, but who, in her absolutely impeccable 1940s gowns and platinum up-do was for all the world as haunting and gorgeous and glamorous as Vivian Leigh. And the woman was mad! Seriously mad. But she had dressed with deliberation, and as she passed would stare into my eyes as though she were bequeathing me “the” secret. Clearly, if I am recalling her 30 years later, she was.

DG: And as a woman, you're pretty glamorous yourself? Or has domestic life in Portland given you a different perspective? What about having a daughter--can you advise her on glamour?

NR: When I arrived in Portland, I quickly met another LA-transplant, a TV writer named Jill Cargaman, with whom I made a pact: each time we saw each other, we’d be showing cleavage and/or nipple; wearing mascara, and, preferably, drinking cocktails, a pledge that inspired her to write the following ode:

No matter who wears Birkenstocks
Or fleece-y garb and limp dull locks
I'm clinging fast to my state of bliss
What Portland calls "Midlife Crisis":
My make-up thick, my hair a'blown
My cleavage bared, my "rise" too low
I'm proud to front my style and class
(Although I'm freezing off my ass!)

Was I bereft when she hightailed it back to LA? Oh yeah. But aside from occasionally putting on my husband’s fleece jacket in the house when it’s cold, I don’t dress like a typical Portland gal. Not that I don’t appreciate what can be done with a sturdy build, a no-fuss haircut, and a bicycle, but it’s not for me. I like to dress – even if it’s in jeans and a t-shirt, which it often is – as though when I step outside, I might run into, say, William Langewiesche or Javier Bardem; I want to be ready. I want to look good. As long as my boobs have bounce, they will occasionally be the featured player in the ensemble. I want my husband to slip his hand around my waist because the waist, you see, is asking to be embraced. For me, glamour is about the frisson of being connected to that spot, that moment; to paving the way for that moment to come.

I once wrote: “About a decade after a woman gives birth to a girl, she begins to know exponentially and unequivocally less about fashion than her daughter.” When my daughter was 12, she rolled her eyes as my '80s Lurex blouse with the ruche sleeves; now, at 18, she wears it. I will freely admit she’s so easy in her skin, so curious and inventive, that she can make anything look good. Because she’s a budding designer she pays a lot of attention to clothes, and so I find myself looking to her for ideas, whether it’s what pair of jeans to buy (“Oh, mom, god, not those”) or which dress to wear to a party, and she’s pretty much never wrong.


Glamour takes deliberation, taking what fascinates you today – be it a building, a book, blue eyeliner – and investigating it and reworking it and trying it out yourself. I do think the work of doing is what makes glamour work.

Diane von Furstenberg. She’s able to combine efficiency and sexiness; I love her, and in fact, recently bought on eBay a copy of her 1976 Book of Beauty: How to become a more attractive, confident and sensual woman . It’s wonderful, so human.

I am also quite taken with the Chrysler Building.

If you’re interested in exploring the worlds of art and ideas and fashion and beauty and politics and sports and and and… then clearly, it’s a necessity.

Singing karaoke at the Grand Star restaurant in Los Angeles’s Chinatown, during the 1995 Super Vixens Christmas/book release party, while wearing a shantung silk gown in a pink/navy/purple print with gold sequin straps and a matching bolero jacket.


I have an YSL black fox fur-trimmed cape that I bought at a Beverly Hills estate sale for $50. The moment I saw it, I thought, I will someday wrap my sleeping grandson in this .

I do like the Pool Room at the Four Seasons in New York, but have not been in a long time, in case anyone reading this would like to take me to lunch.

9) Something or someone that other people find glamorous and you don't?


10) Something or someone that you find glamorous whose glamour is unrecognized?


Of course! Just look at any three-year-old girl in her tutu. We strive toward glamour even before we know what it is.


12) Is glamour something you're born with?

No, I don’t think so. I think we’re born with, as above, an innate fascination with it. But glamour is something that takes intent; it’s a decision. Thank goodness. Much more interesting that way.

The right woman in me longs to say Blanchett, but damn if Jolie doesn’t fascinate me. And she can fly a plane?

Paris for a visit; Venice long enough to write a book.

Princess Grace. So flawless, so knit together, and she had so many fascinating lovers!

I never before noticed they’re anagrammatic, but anyway, Tokyo.

Stilettos. I can’t really wear them but I appreciate when others do.

Not even close: Versace

Diamonds. And speaking of: yesterday I saw both Moissanite and cubic zirconia; the first are twice as refractive as the real thing, and the second made my pretty spanking nice, real diamond engagement ring look drab. As is well known, the emotional and monetary value of diamonds is completely manufactured by de Beers. Buy fake, I say!

Daniel Craig, and I know this to be empirically true because when last night my husband said, “I want to see the new James Bond movie,” both my daughter and I, with the same little longing in our voices, each said, “Me, too.”