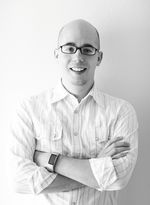 When I asked my Facebook friends to recommend photographers or stylists who could talk knowledgeably about hiding lamp cords, someone gave me a great tip: call Adam Fortner. An Austin-based stylist, Adam started on the editorial side of the profession, as the art director for Texas Architect magazine, later moving to Western Interiors & Design Magazine. In 2007, he founded Creative & Sons, which does photo styling of interiors and objects for editorial and commercial photographers, as well as art direction and production services. (He also has a cool blog, where you can find posts on subjects like decaying Victorian Lego houses and how stylists compose faux grocery lists.) We had such an interesting conversation, moving from lamp cords to other forms of styling magic, that I asked him to share some thoughts and experiences with DeepGlamour readers.

DG: How is styling interiors different from being an interior designer?

Adam Fortner: An interior designer creates spaces that are functional, and we show them off. The main difference is in the format our work takes. An interior designer creates a space that is meant to be experienced in three dimensions. The photographer and stylist’s job is to take that three-dimensional, fluid space and present it in a two-dimensional static photograph within a limited frame. Everything we do serves the photo, which can mean eliminating or moving things so they look best on camera, not necessarily so they function in the space. I tell people you can’t live in a styled room: the chairs are all at odd angles and the coffee table might be three inches from the couch; but look at the photograph and it’s magically transformed from what you see around you. 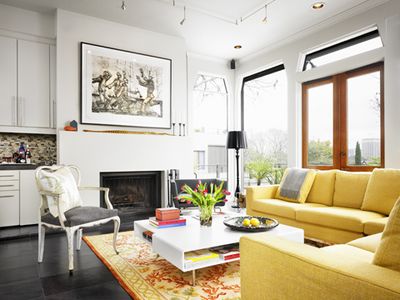 DG: How is a room different when it's been styled for a magazine photo shoot compared to the way it might look if the owner had cleaned it up for visitors?

AF: For the most part we try to leave the room as we found it, but once we’ve found the angle and framing of the final photograph, adjustments have to be made. At that point a stylist’s job becomes editing. It might be a simple tweak to accommodate the perspective of the camera and show off one detail or another, or filling spaces that might have become visual voids in the frame, or even removing or adjusting things to avoid overlaps or add the appearance of depth. In some cases the accessories or pieces that the designer or client chose just won’t work for a photo and you have to change it. A dark, rich duvet cover may look and feel luxurious in person, but it may fall flat in camera. I am careful to reassure homeowners or clients that it’s not about their personal taste, it’s about the composition and quality of the photo. 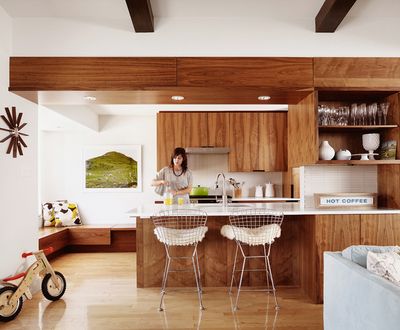 My favorite exchange about styling comes from a short-lived sitcom and goes like this:

– Who wants their room photographed anyway so everyone knows what their stuff looks like?
– They don’t photograph your stuff; they bring in their own stuff.
– Well why don’t we just have them come in and finish the room?
– Because if your stuff doesn’t look fabulous in the first place then they don’t want to come in and change it!

DG: What's the purpose of styling a room for a magazine photo? What's the effect you're trying to achieve?

AF: Styling is often called the “hidden profession.” A lot of people don’t know it is even a career, and in fact, to be good at it, that’s the whole point: not to be noticed. So you have to find a balance of studied naturalness. A lot of it is also about aspiration. You want to create a space that people want to be in, one that exemplifies the way people want to live, not necessarily the way they actually live. Honestly, how many people wake up to a vase of flowers, a cup of tea and The New York Times perfectly folded on their nightstand? 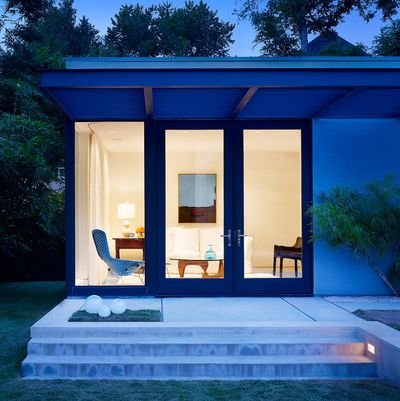 DG: How does styling for architects differ from styling for interiors magazines or advertising?

AF: The architect is creating or defining a space, so showing off their work takes a different form. Architects understand and experience spaces in a different way. For them, an open and unadorned space is beautiful in and of itself. They appreciate the clean lines, textures, and light in a room. When styling a space for an architect, you often only need minimal adornments, and what you do use really needs to highlight the architecture. That doesn’t always sell the public, though. Empty spaces can look cold and uninviting at first glance, and it takes a little more time and effort to see the details. A magazine or advertisement doesn’t have that luxury; it needs to grab a viewers’ attention in a split-second. I try to recommend this approach to architects. By creating images that capture people’s attention, they then have the opportunity to guide clients deeper into the details, and have a better chance of communicating their thoughts and ideas. 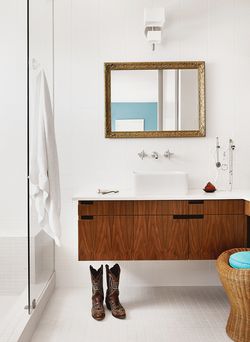 DG: You've recently done some styling work for shoots done in photo studios rather than real interiors. How is styling different when you build from scratch? What does it teach you about styling in the “real world”?

AF: I think of styling as storytelling. When you work in someone’s home, the story is already there. They’ve created their own world with their own tastes: their books, their art, their furniture; we’re mainly there to enhance and document it. When working in a studio, you’re starting with a blank slate. You have to create the entire story–start to finish–and the sky’s the limit so that allows you a lot more freedom. I’ve been working with an excellent production designer who has taught me so much about that. I’ve taken those lessons back to the houses I work on give myself a little more room to create atmosphere, especially when faced with more challenging, less engaging spaces.

DG: When you see a photo of a room in a catalog or interiors magazine, do you think about how it’s been styled? What do you notice that a layperson wouldn’t? 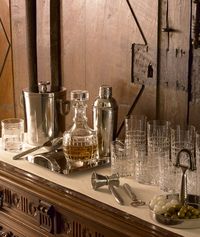 AF: I can’t look at magazines or catalogs without noticing how they’re styled. I hardly look at the products in catalogs. In fact, I’m usually looking at the objects that aren’t for sale. Similarly, in magazines, I’m looking for those small touches that give the space personality. I also look at not only what is in the photo, but also how it’s placed, and why that composition works.

Glamour is a magic combination of confidence, beauty, and ease that create a whole greater than the sum of its parts. The word always conjures a flash of light in my mind’s eye… whether it be flashbulbs, the sparkle of a diamond, the sheen of beautiful fabric, or just that glint in the eye of someone at ease with themselves. But I also think that glamour is something ascribed, not inherent. Things are only glamorous because someone else thinks they are.

A very good friend of mine gave me a book of his work for my birthday, and while I knew of him and some of his work, I was impressed/amazed by the range and drama and sophistication of what I saw from start to finish.

For basic survival glamour is a luxury, but like the fine arts, it’s an unknown quantity that can’t be measured or explained, yet somehow makes life more enjoyable.

. The interiors of her apartment are just amazing. In fact, it was those sets that got me interested in interior design. If I could pick just a scene from a movie, it would be the “Ascot Gavotte” scene from My Fair Lady

. The amazing black-and-white dresses and hats against the simple, white, paper-like buildings (all dreamed up by Cecil Beaton) along with the stilted movements and poses are just brilliant.

When I was working for a magazine in Los Angeles we hosted a tour of the Case Study houses in Pacific Palisades, which was amazing enough, but in the evening they opened up the Eames house and lit up the lawn with strings of lights. I stood there taking in the crisp night air coming in off the ocean and thinking that I never could have dreamed I’d be there, yet there I was.

A Cartier Tank Américaine Flying Tourbillon watch. With a name like that, how can it not be glamorous?

Not any one specifically, but an old house filled with lots of history.

Is there a glamorous job? I think there are a lot of jobs that seem glamorous, but that’s because we don’t do them. If something looks easy and glamorous, it’s probably because there’s a lot of hard work behind it.

Working in the publishing industry. Like before, it often gets glorified in movies and on TV, and really it’s mostly hard work. Yes, there are moments of fun and excitement—that happens anywhere when you love what you’re doing—but there’s also the other 90 percent of the time that you are working and planning and coordinating to make that moment happen. But even I forget that sometimes.

10) Something or someone that you find glamorous whose glamour is unrecognized.

Space. Not the final frontier, but the absence of stuff. Space to do whatever you want: an empty room, an open field. It can be anything and everything.

I didn’t know it was in danger! I think the world needs glamour, whether to embrace or rail against, depending on the mood, so it will be around for quite some time.

12) Is glamour something you're born with?

I don’t think so. It’s something that you achieve, intentionally or otherwise.