This week's Top 10 comes from our semi-mysterious blogger DMC, a.k.a. Groomzilla, who most recently wrote about Michael Jackson.—VP

America does not have royalty in the traditional sense, but what we lack in kings and queens we make up for in the glamorous pop divas that fill our tabloids with gowns, glitter, and goss. Pop divas not only define “the look” of any moment in time, but they also provide its rhythm—the pulsing backbeat that is in the background of our shopping trips, our car rides, our cocktail hours, and our nights on the town. We even derive some of our most-overused idiomatic expressions from pop songs, as evidenced by the gross misuse of “bootylicious” when Beyoncé unleased the word upon the unsuspecting masses which, clearly, were “not ready for her jelly.” But which pop divas have this author’s heart at this moment? The answer might surprise you. 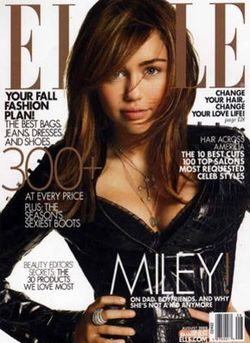 10. Miley Cyrus. Yes, she’s annoying. Her dad was (and remains) even more annoying, and can never be forgiven for my six-week line dancing unit in co-ed Freshman year PE set to “Achy Breaky Heart.” Her horse teeth alone give me nightmares. You cannot deny, however, the power that “Hannah Montana” has over the tween set. She sells out concerts in seconds and sends parents scrambling for overpriced tickets. Her bare shoulder turned a single Annie Leibovitz portrait into a public referendum on pedophilia. And maybe, just maybe, I have belted out “See You Again” or “The Climb” while racing down the 101.

. She’s been around forever, but we really stood up and took notice when her ultrasexy “Fever” album had everyone singing “la la la / la la la la la” on a loop in 2002. Secretly, you wanted to wear the dress from the “Can’t Get You Out of My Head” video, because druid hood + no bra + mini-skirt = fashion, dahling! Ms. Minogue brings her concert spectacle to North America for the first time this Fall, just as she launches her new cologne for men in Europe and Australia. Will I smell like Kylie while watching Kylie and singing Kylie in the car afterwards? Of course!

. Tall, willowy and fresh-faced, this new young country star makes the insipid lyrics of “Love Story” oddly charming and believable. It’s rare to see such Siren-like beauty on the red carpet at the age of 19, and rarer still to hear a heterosexual male co-worker openly admit to having attended a “really great” concert where the average attendee was still in driver’s ed. 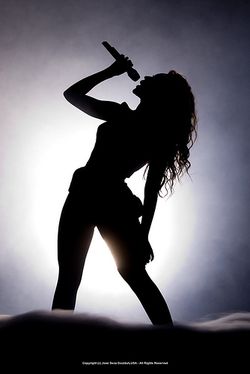 7. Beyoncé Knowles. Just add water, and she makes her own parody. Her alter ego, Sasha Fierce

, wears a mechanical hand and sunglasses with fringe. Her mother makes the world’s ugliest clothes for the House of Deréon. She rose to stardom writing songs about her bills, who paid for her shoes, and how she and her sisters in matching camo-print booty shorts were ”survivors” in a video of an undisclosed jungle near Beverly Hills. But her lyrical hooks burn into your skull, from “Crazy in Love” to “Single Ladies.” She seems to have worn every gown, every wig, and every Thierry Mugler shoulder pad concept ever conceived. At her best, she is a fashion icon. At her worst, you still want to talk about what she’s wearing. Yet for all of her unapologetic, over-the-top divadom, she comes across as that nice girl next to door who just happens to be rich, talented, and married to Jay-Z.

6. Carrie Underwood. In one song, she made it cool for you to vandalize your cheating boyfriend’s car while still keeping your teased blond hair looking fierce. The first “American Idol” winner to find success in country music, Underwood presents amazing outfit after amazing outfit in concert and on the red carpet. Her legs alone are enough to want to be her for a day.

5. Justin Timberlake. The only male “pop diva” on this list, there is something a little feminine about J.T. even when he’s at his man-candy best. Perhaps its his attention to the William Rast clothing line that he co-designs, or maybe its his carefully calculated (almost overly-perfect) image as a ladies’ man. Regardless, if you ask any subset of young males which celebrity they want to be, Timberlake’s name is likely to be at the top of the list. 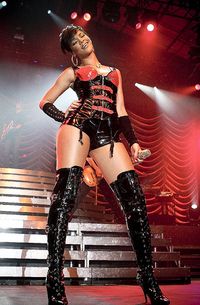 4. Rihanna. I have more current information on Rihanna’s haircuts than I do the Obama health care plan. Rihanna simply oozes modern fashion, whether arriving at the Costume Institute Gala in a Dolce pantsuit or emerging from a restaurant in a sea of pearls and chains over a sassy mini-dress. Not only a style icon-in-training, Rihanna single-handedly caused the entire world population to develop a stuttering problem for any word ending in “ella” for over a year.

3. Cher. It’s Cher. Does this require explanation? Who else can put on a Bob Mackie headdress and a gown with a neckline plunging down to her naughty bits and not come across as completely ridiculous?

2. Madonna. The original MTV-era provocateur, Madonna is ground zero for almost any major concept in the modern day music video, arena concert, or pop diva marketing strategy. She has also built her empire on an ever-changing repetoire of glamorous looks. Now 50, the concept of “Madonna glamour” is less about sex and more about pure power: the life of a globe-trotting tastemaker who dabbles in film, philanthropy, and religious exploration to find meaning outside of the discotheque. Secretly everyone wants to be her, even if they don’t necessarily want to recreate her last “look” or tone their arms to a frightening degree. 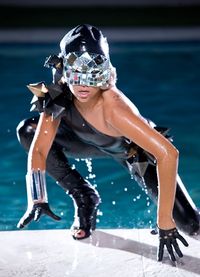 1. Lady GaGa. Masks encrusted with disco balls? Check. Spacesuit-like leotards with stiletto heels? Check. Smokey eye make-up that resembles a zipper? Check. Cone bras that shoot out fire? Hell, even Madge didn’t think of that one. No one is pushing the iconographic envelope like Lady GaGa, who draws inspiration from everyone from Helmut Newton to Britney Spears to create the kind of pop spectacle that would make Warhol grin. Her song “Paparazzi” might best describe her modus operandi: “Baby, there’s no other superstar / You know that I’ll be / Your papa, paparazzi.”