Diaries Of A Groomzilla - The Finale! (Special "Vote No On 8" Edition) 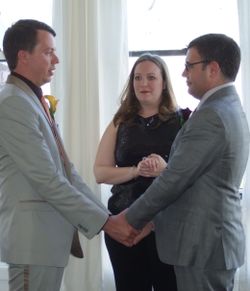 A Southern drama queen loves nothing more than a great horror story.  My poetic muse secretly hoped that the florist would deliver a hideous vase of twigs and tinsel, the caterer would show up with a toaster oven and a crate of Hot Pockets, and the bartender would only think to pour Boone’s Farm in strawberry and raspberry flavors.  But alas, each of these fine professionals did an exemplary job of meeting my every crazy whim and instruction and producing a perfect event memorable for all the right reasons.  In short, the wedding was a complete and (in my biased opinion) flawless success.
Well, perhaps not entirely flawless…
The night before, we decided that we needed to tie balloons on the front gate to help guests locate the house.  Thinking that a simple, tasteful balloon could be procured at the Castro Safeway of Armistead Maupin fame, my friend C and I drove over to peruse the selection.  What followed was a short tragédie bourgeoise:

Groomzilla (in huffy, exhausted, imperious tone):  “I need a wedding balloon.” (Subtext:  “I don’t have time to deal with you right now. Read my mind!  I am important! I have 50 people coming over tomorrow to judge me!”)

Store employee (in inexplicable Bronx accent):  “OK, like, we have this balloon here.” (Subtext:  “I can’t wait until I graduate so I don’t have to deal with one more queen with an attitude. Get your own damn balloon!  I should have never moved out of the deli counter.”)

Groomzilla (annoyed):  “That’s ugly.  This is a gay wedding.” (Subtext:  “Look at my ridiculous-but-chic oversized Burberry sunglasses! Do I look like I want a balloon in the shape of a bell? I bet Beyonce didn’t have to shop somewhere that sold Elmo birthday cakes when she got married.”)

Store employee:  “In that case, you will be wantin’ this balloon. It’s all classy and sh*t.” (Subtext:  “This ain’t Neiman Marcus, queen. It’s Safeway.  It’s a balloon. I make $5 an hour – do I look like your wedding planner? You don’t know me!”)

Here is a photo of the Safeway Classy Gay Wedding Balloon.  Order now while supplies last. 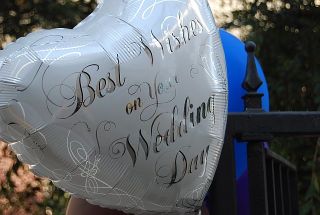 The following morning—the dawn of the big day—I suffered a panic attack after my husband’s inexplicable and controversial decision to alter the sleeves on his suit with an old Ramada Inn sewing kit that he whipped out of his briefcase while I was in the shower.  I strenuously objected to the thought of performing home alteration a few hours before the wedding, and—as any groomzilla would—engaged in a rational, calm dialogue with my husband as he began threading the needle: