Dive Bars And The Glamour Of Seediness: The Tune Inn 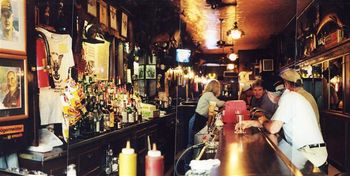 There's a certain mystique in being regarded as a regular at some establishments.  While the Four Seasons and the Waverly Inn are places to be seen, the really intelligent scenester knows being utterly at home in place with a dubious reputation is far more glamourous. 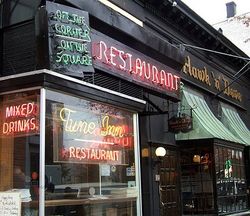 Playboy.com has released a list of Top Ten Dive Bars (and the NY Post came up with their own, just to be difficult.)  But my own sentimental favorite is the Tune Inn, in Washington DC. Since Esquire  "discovered" it a few years back, the Tune has been on nearly every list possible.  In January, a new generation of Hillites will discover its joys.

But when I was living on 3rd and A, behind the Supreme Court and kitty-corner from the ACLU, the Tune wasn't quite so well regarded.  It was always packed at Happy Hour, but during the day, I could spend all afternoon in a  booth, dawdling over a draft beer, a bad cheeseburger, and a book.  In DC, most people had jobs with regular hours, and freelancers were few.  I got my mail there, when I was between fixed addresses, I listed the number as an emergency contact, and I ran a tab so I could eat between paychecks. (The bartender cashed my unemployment checks, too.)   After a Christmas in Montana, I brought back  frozen elk meat, and the kitchen turned out elk burgers for the lunch rush ( the owners were big hunters,  judging by the wall decor.)  When I got engaged, I had a bridal shower at the bar, if unwrapping edible panties in between shots counts as a shower.

Walking on the wild side of Washington seems rather quaint when viewed from Los Angeles, many years later.  Everyone needs a home away from home, though, and the Tune was that and more.