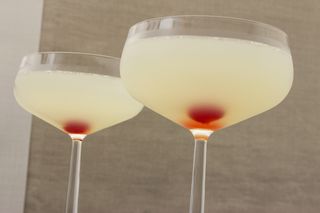 It’s been nearly eighty years since the repeal of Prohibition. But pop into a bar in any slightly hipster neighborhood. You’ll think it’s 1920-something all over again.

I’m not talking about the handlebar mustaches, either (where I live, in Baltimore, they are – thankfully – rare). It’s the drinks. All over Baltimore, Prohibition era cocktails like the Aviation (gin, maraschino liqueur and crème de violette) and the Bee’s Knees (gin, honey and lemon) sit on menus alongside craft beers and small-batch bourbons. With the drink snobs, they’re hot.

The wild days of Prohibition have long been considered glamorous. The fabulous parties, lavish spending, and life-on-the-edge vibe of the Gatsby era have spawned numerous tributes – including a stylized (and much-publicized) film version of Fitzgerald’s famous novel, due in theaters next summer.

So it naturally follows that we celebrate the drinks that gave the era its fizz.

One of the leaders in Baltimore’s classic cocktails movement is bartender/distiller Jon Blair. Along with Brendan Dorr, Blair operates a semi-regular pop-up cocktail bar – like a speakeasy – called the Forgotten Cocktail Club.

According to Blair, Forgotten Cocktail Club members are interested in history – to an extent. While he doesn’t believe they research the era at home, on their own, Blair answers many questions about the provenance of specific cocktails – about who came up with specific drinks, and when. And a handful of people really get into the theme, dressing in Prohibition era costumes for the events.

His take on the allure of the Prohibition era:

“I think there’s some glamour from that time period because there was less technology back then. Today, some people want to take a step back. Anonymity was a lot easier to retain back in the day. Accountability was a lot harder. I think the glamour has to do with escapism. The grass is always greener on the other side.”

It’s not only that 1920’s gangsters didn’t have to worry about their friends posting embarrassing photos on Facebook. “When you look at the Prohibition era,” says Blair, “bartenders didn’t have a bottle of sour mix to open. They worked with raw sugar, lemon juice, and egg whites – what they had at their disposal. Much of the resurgence of these cocktails comes from people caring about their ingredients.”

Blair works behind the bar at RYE, a Baltimore bar with several Prohibition era cocktails on its menu. RYE’s owner, Ryan Perlberg, agrees that classic cocktails are popular thanks to their quality. But he adds that sometimes, the motivation to choose a certain drink isn’t so pure.

“It’s because either they feel deeply connected to that particular cocktail…or they want to impress a girl.”

Getting the girl. Deep down, isn’t that what it’s always about?

Posted by Kit Pollard on October 15, 2012 in History, Food And Drink