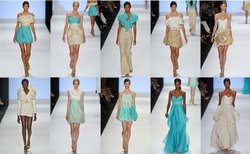 Portland-based designer Leanne Marshall won, with a collection inspired by waves, which was pretty enough, but what woman wants more fabric around her hips?

Lackluster challenges, personality-deficient casting, and speculation about the move to Lifetime sabotaged this season for many viewers.

Winner of the first season, Jay McCarroll hints that leathah girl Stella and her beau, Rat Bones, might get their own series.

Keen observers noticed ANTM's Bianca Golden on the runway. She's facing assault charges in conjunction with a weird airplane incident involving her family and Nikki Blonsky. If only she'd punched someone in the front row. WWF meets PR?

Posted by KateC on October 16, 2008 in Fashion, Television