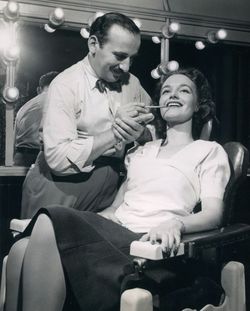 When Mademoiselle  ran the first before-and-after beauty feature in 1936, the magazine enlisted Paramount Studios makeup artist Eddie Senz to transform Barbara Phillips, a nurse who described herself as “homely as a hedgehog,” into something resembling a Hollywood star. He was not tactful. “Your face is too narrow and—er—well your neck’s too long,” he told Phillips. He was even blunter with the anonymous subjects he transformed for the regular column Mademoiselle started after the makeover was a huge hit. “Once a young woman built on these lines would have been described as pleasingly plump,” he wrote in one column. “But let’s be realistic and point out that she’s short, fat, stocky, and missing in attractive feminine curves.”

For all his lack of tact, Senz did know how to change people’s looks. While at Paramount, he so dramatically transformed Frances Farmer that, her biographer Peter Shelley writes, “she did not recognize the person who looked back at her from the mirror.”

Toward the end of World War II, the Office of Strategic Services (the predecessor to the CIA) enlisted Senz to suggest how Hitler might disguise himself, by changing or shaving his hair (and mustache, of course), growing a beard, or wearing glasses. Although supposedly unknown until a Der Spiegel report in the 1990s, Senz’s work was actually reported, with concept photos, by The New York Times in October 1944. Senz told Victor Schiff, who wrote the story, that the hardest challenge would be to hide Hitler’s piercing eyes, “the most remarkable I have ever seen.”

Randall B. Woods writes, Johnson told a “dumbfounded” Senz, “I’m a poor man and I don’t make much money, but I've got a wife and a couple of daughters, and four or five people that run around with me, and I like the way you make the look....This is your country and I want to see what you want to do about it.” A compliant Senz accepted transportation costs and a $100 bill to style the hair of the three Johnson women and a bunch of secretaries.

Although billed as a Hollywood makeup artist, for most of his career Senz made his living through savvy publicity that drew clients to his New York salon. (Here are his 1940 “beauty tips for office girls.”) He took a simultaneously bossy and skeptical approach to beauty standards.

“Beauty is all a matter of concept,” he told New York Times reporter Joan Cook in 1961. “In this country, beauty generally means an oval, Nordic sort of face. We’ve been brainwashed to think our standards are the only standards. Who are we to think we have a priority on beauty knowledge?”

Confronted with a client, however, that relativism disappeared, often along with the client’s eyebrows.“For many of my customers,” he told Cook, “my work consists of mentally superimposing the ideal face on top of theirs and then adding or taking away until the illusion of similarity has been achieved.”

Don't forget to enter our special Makeover Week giveaway of IntésivEye eye-makeup remover pads. Details at the post below.

[Photo of Eddie Senz at work in Hollywood for sale on Irish Ebay.]

Posted by Virginia Postrel on December 16, 2012 in History, Appearance, Makeup