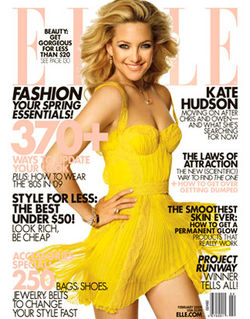 Elle has hired Creative Artists to help insinuate the glossy rag-mag into more TV and film productions. As if whoring the staff on CW's Stylista wasn't enough.  Since Project Runway's Nina Garcia isn't on the masthead now and Stylista isn't likely to come back, what's a public-conscious editrix to do?

Magazines on TV aren't all that new--the National Enquirer tried, a zillion years ago, and TV Guide has its own lonely little cable channel. Gourmet and Real Simple have PBS shows (your tax dollars at play), and Seventeen, Rolling Stone, and Car and Driver have all hosted reality shows, Elle's publishers  must think there's still room at the trough. And the mag isn't likely to follow Sport's Illustrated's Swimsuit edition lead.

Personally, I think the best bet for Elle is through writers and production designers, rather than suits.  Instead of going for the obvious--Gossip Girl, Ugly Betty etc., work the name into unexpected shows. On My Name is Earl, Jason Lee's character could pick Elle as his favorite bathroom reading matter. Or shooting a little higher, maybe Turtle of Entourage  could get a gig writing a dating advice column?

Aim for the stars.

Posted by KateCoe on January 13, 2009 in Television, Magazines