Finding A Look: The Value Of Good Salespeople 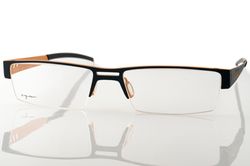 Needing a new pair of glasses, I drove an hour to visit an eye wear store in Denver. I was told they had 4,000 “products” to choose from, with designs from all over the world. To help me narrow down the possibilities, I was meeting with Paige, the salesperson who had helped me choose my last pair of glasses. While working in a local shop, Paige had put me in a pair of glasses I would never have tried without her help. I knew she had done well because many people, including strangers, had subsequently commented on how much they liked my glasses.

I called a few hours early to let her know I was coming, and when I arrived she said she had been thinking about what eye wear she would like me to try ever since I had called. I sat in a chair while she walked around the store putting glasses on a tray, and she came back with about ten pairs to try. As soon as I tried some she would say “no,” and before long we were down to two choices that she felt looked great. Finding it hard to choose, we called another salesperson over, and that woman voted for the pair that she felt had more “edge.” So the choice became the Danish-designed Orgreen pair shown in the photograph.

I’ve described this satisfying shopping experience to illustrate why we go back repeatedly to work with good salespeople. Sadly, finding a salesperson with a good eye whose opinion you trust can be difficult. So when you locate such a salesperson, they become a valuable asset. In this case, when Paige changed where she worked, I followed her to her new location. Paige has helped several people I know choose their eye wear. Some friends told my wife and me about her, and I send people to her whenever they comment on my glasses or my wife’s.

All too often you find yourself dealing with salespeople who don’t seem to hear what you’re telling them—they seem to ignore or not understand what you’ve said about the look you are hoping to find, the situation you need it for it, and so on. Sometimes they don’t even know the store’s merchandise well enough to help you narrow down your choices, whereas a good salesperson whose opinion you trust can save you a lot of time, and save you grief in other ways. 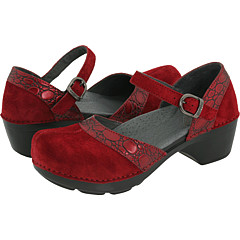 Last fall my wife was headed to an event in London. After she had the rest of her outfit picked out, she went to a shoe store that had a bewildering array of choices. She knew the look she wanted, so she picked out seven pairs of shoes to try on. With both arms full of samples, she showed a young salesperson her choices. My wife explained that the event would be in a huge exhibition center, and that she might be walking and standing for most of a day. To my wife’s surprise the young woman started taking shoes away from her, explaining that she was taking away any shoes that she felt would be uncomfortable after a few hours. My wife was left with only two choices, one of which was the pair of Dansko Sally suede clogs pictured at right.

Though my wife loved them, she doubted they would remain comfortable for a full day. The salesperson assured her they would, and thankfully it turned out she was right.

A friend of ours was going to the same event and purchased a pair of shoes without asking about comfort. He decided to test his purchase by spending an hour on his feet in them, after which he pronounced them “posing” shoes, not “wearing” shoes. He had to go shopping again to buy shoes he could wear all day.

Finding a salesperson who will tell you when something you are trying on doesn’t work well on you is a good start. Finding one who tells you that something “looks great on you” when it fits terribly is a signal to shop elsewhere. We once had artist residencies at Montalvo in California, with second-story rooms. The villa grounds were often used for elaborate weddings. I got to know the wedding planner, and looking down on one of those wedding ceremonies I commented to her that the strangely layered dress that the mother-of-the-bride was wearing looked as if her slip were showing. The wedding planner’s comment was, “Someone lied to her.”

Posted by Randall Shinn on April 12, 2010 in Fashion, Appearance, Weddings