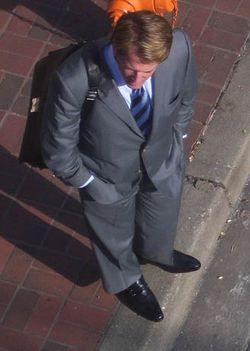 Recently I found myself with time to kill in a area of Denver where there are several courthouses and high-rise office buildings. I decided to sit in a Starbucks and spend some time observing the clothing of the steady parade of customers.

Some clothing served as markers of high-status positions. The men in expensive shoes and suits were most likely connected to nearby law firms or corporate offices. Yet their clothing sometimes reflected more than business seriousness. Some of the men clearly relished looking great, right up to their impeccably cut and combed hair.

To give my observations some coherence, I decided to focus on footwear. Years ago I heard an art dealer mention footwear as one of the gauges you could use to judge people’s willingness to spend money on themselves. The premise was that if a potential customer had spent money on stylish footwear, they were also more likely to spend money buying art. Since then, several retailers of luxury goods have told me that they have learned to be careful about jumping to conclusions based on appearance. People often dress quite casually while relaxing or on vacation, and there are people with money who don't like to dress up.

Nonetheless, we all make make assumptions based on first impressions, and a salesperson in an jewelry store will instinctively notice when someone enters the store wearing nice jewelry. So while I was observing the diverse clothing styles of the Starbucks customers, I decided to see if looking first at people’s footwear would usually provide a quick indication of both the expense and style of what I would see when I looked higher.

In general this proved to be the case. Dressy shoes predicted dressy clothes, casual shoes predicted casual clothes, and so on. Nonetheless, there were enough subtle variations to keep things interesting. Casual footwear varied in stylishness over a vast range, and these variations also tended to reflect the wearer’s fashion look. 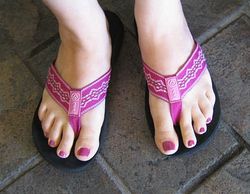 Even flip-flops varied widely. There were some decorated ones, though I saw none of the hand-decorated Swarovski crystal variety, such as those available on the internet here and here. (The latter site even offers a collection of bridal flip flops.) Fun flip flops styles generally went with fashions that were fun and looked comfortable to wear.

Footwear that exposes bare feet has been and remains a subject of debate as office wear. I saw only three women in business attire who wore flip flops, and in each case their business wear was relatively casual, and their flip flops were black and sleek, which made them look something like sandals. The women that wore them were young and appeared to be lower level employees. (I was reminded of the business maxim, “dress for the job you want, not the job you have.”)

While observing I also noticed that footwear and attire were sometimes used either to attract attention or seemingly to avoid attention. For example, two young women came in together, obviously from the same office. One had on black flip-flops and the other wore stylish three-inch heels. The flip-flop wearer had on a loose white blouse worn outside a knee-length, loose brown skirt. Nothing about her clothing called attention to her body, which was thin, but also rather shapeless. In contrast, the young woman wearing the stylish high-heels had on a black dress which, while still office appropriate, was short enough to showcase her remarkably beautiful legs. There were a lot of customers, and when she left Starbucks every man there turned to watch her walk away. She clearly knew the value of her legs, and had directed attention to them. And, like the stylishly dressed businessmen, she seemed to relish knowing that she looked great.

The lyrics of the above 1980s No Nonsense commercial say, “If the attitude fits, wear it.” Yet sometimes wearing different clothing can substantially influence our here-and-now attitude about ourselves. So  perhaps the saying should sometimes be, “If you want an attitude, wear it.”

[Business suit photograph used by permission of jjwam, whose Flickr photostream is here. The "pink flip flops" photo is by cambodia4kidsorg, and used under the Flickr Creative Commons License.]

Posted by Randall Shinn on September 23, 2009 in Fashion, Appearance