For most of us, trying on a a new identity is limited to fancy dress parties and Halloween. Masquerading as a pirate, a naughty nurse, or  celebrity du jour (how many Sarah Palins will roam West Hollywood next week?) is fun, a little excursion into the land of what might have been had things been different.  A side trip on the boulevards of life as we don't know it, so to speak.

But what about people who long desperately to be other than as nature made them?  Born in the wrong body, as the transgender community says.  In the new Atlantic Monthly, Hanna Rosin explores the world of children who know that their physical selves aren't their real selves--boys who want to be girls, girls who want to be boys--and the parents, the therapists, and the doctors who want to help, want to understand, and want to provide answers.

Rosin meets an eight-year-old boy, Brandon, and his family. Brandon's known that he's really supposed to be a girl since he was tiny. His mother tried to convince him otherwise:

“Brandon, God made you a boy for a special reason,” she told him before they said prayers one night when he was 5, the first part of a speech she’d prepared. But he cut her off: “God made a mistake,” he said.

Some doctors prescribe hormone blockers, so as to prevent puberty, which is then followed by cross-sex hormones and sex-change surgery.  The blockers are reversible, but of course, surgery is not.   Another school of thought claims that gender dysphoria can be treated without changing the sex of the child.  Brandon's mother decided to embrace her son as her daughter, now known as Bridget, but worries about life in their small Southern town. 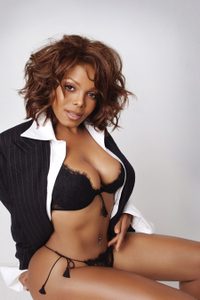 Janet Jackson's come out with a line of lingerie, including a bra which , she claims, women won't rush home to take off,  after a long day.   I think this is a pity.  Releasing  your breasts to roam free is one of life's great pleasures. I know transvestites and drag queens who don't understand this. I've never met a tranny who enjoyed letting herself go, as so many of my born female sisters do. Looking fabulous, all dolled up, is really the glory of the cross-dresser, and after so much pain, strain and tears, why would anyone ever abandon it?  Maybe if you have to work harder for something, you value it more. As Bridget grows up, will she remember being Brandon, in a time before sequins?

But what if the grass isn't always greener? What happens if you change your mind? Mike Penner, the  sports writer who'd announced in April that he'd be known as Christine Daniels, is back at the LA Times sports desk as Mike Penner. Was it just too much work? I don't know Penner, so I can't say. The LAT wiped all his blog entries about his transformation.

Would we be better off in a world where every day is Halloween? Where we can put on an identity, like a Wonderbra, and then take it off, when the wires start to pinch?