From Exotic To Local: The Changing Nature Of Produce Glamour 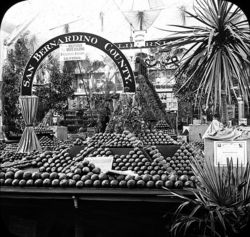 In a column in Saturday's WSJ, I defend Michael Pollan's expensive taste in peaches but question the locavore ideal. Here's the lead:

, the best-selling author of "The Omnivore's Dilemma" and a leading advocate of buying locally grown food, recently upset many of his fans by daring to put numbers on his oft-repeated prescription to "pay more, eat less." Eight dollars for a dozen eggs? $3.90 for a pound of peaches?

Those figures were way too specific and way, way too high to go unnoticed. The humanistic foe of industrialized eating suddenly sounded like a privileged elitist, and the local-food cause seemed insensitive to cash-strapped shoppers.

But Mr. Pollan was only being honest. Patronizing local farmers who produce in small batches tends to cost more. You may find some peak-season bargains at the farmers' market, but there's no such thing as a free locavore lunch. Getting fruits and vegetables only from local farms necessarily limits variety—few crops are available everywhere all the time—and it doesn't come cheap. Economies of scale apply even to produce.

The column and the response to it got me thinking about changes in what makes produce seem glamorous to consumers. (See also Kit Pollard's earlier post on Pollan and food glamour.) The locavore movement draws much of its appeal not only from the tastiness of ripe, local fruits but from their contemporary exoticism. They come with a special aura of authenticity and care. They're more glamorous than the mass-produced stuff you find in supermarket produce aisles.

Yet not so long ago, glamorous fruits were those that came from faraway climes: the California oranges pictured above at the 1893 World Columbian Exposition in Chicago or, more recently, now-ubiquitous pomegranates and avocados. Simon Winder evokes the latter in his book on James Bond, The Man Who Saved Britain

For me the heart of the book [Casino Royale], though, must be the scene when Bond tucks into an avocado pear. An avocado! These were exotic in 1939 but they could at least be bought. Avocados only really became available again in Britain in the late 1950s and had a desirability status akin to that felt (rather more democratically) for bananas by East Germans. The sense of the exotic which Fleming had to work for really hard in later books is won here with a mere oily tropical fruit on the windswept Channel coast. Oddly, during one of the many horrible, diarrhoeic currency crises that ravaged the international value of the pound (this one in the late sixties), avocados were specifically mentioned (along with strawberries and vintage wine) as imports to be restricted under the draconian ‘Operation Brutus,’ mercifully never implemented.

Shortly after reading Winder's book, I had a conversation with someone who recalled how as recently as the 1970s (or it might have even been the 1980s) avocados were a special treat in Britain and could be the highlight of a dinner-party menu. 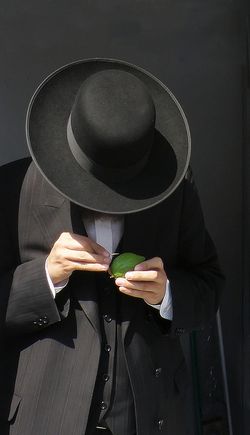 It's currently the Jewish holiday of Sukkot, a harvest festival whose observance includes waving the lulav and etrog. The lulav is a bundle of palm, willow, and myrtle branches, while the etrog is a citron. I can only imagine how exotic and, yes, glamorous such citrus fruit would have seemed to someone living in a 19th-century Russian shtetl. Jewish liturgy is a language of figs, pomegranates, olives, and dates, of a Mediterranean climate and, thus, in a icy land of beets, it would intensifu feelings of exile and longing for a paradisical land of milk and honey. The architectural historian Alice T. Friedman, author of the excellent new book American Glamour and the Evolution of Modern Architecture

, captures a secular product of that tropical glamour in a 2000 article about Morris Lapidus's Miami hotel architecture.

Miami, unlike Los Angeles, was a place to which Jews came in order to reclaim old identities eroded by American assimilation or the upheaval of war; it was a place to revisit their roots. For this reason, European immigrants and Holocaust survivors especially found the place magical—something unknown in their experience, a chance survival of small-town, Eastern European Jewish culture along an unlikely stretch of sunny, beautiful, palm-lined beach. Isaac Bashevis Singer spoke for many when he described Miami Beach as “a paradise”:

When I first came to this country in 1935, I found that the winters in New York were terribly cold, like the winters in Poland. The winter of 1948 was particularly cold. People used to say it’s warm in Miami Beach in the winter, but I couldn’t believe it. I just could not believe that this is possible, that there is a place where it is warm in winter. I also heard about Miami Beach all kinds of stories that the place is vulgar, that the people are funny there. They said all kinds of things about Miami Beach, but if people are vulgar or crazy, I like to know about it.

He goes on to describe precisely that magical other-worldliness that residents and visitors alike found so compelling:

After we arrived at the train station in Miami, we took a taxi over the causeway to Miami Beach. As we rode over the causeway, I could hardly believe my eyes. It was almost unimaginable that in Miami Beach it was 80 degrees while in New York it was 20. Everything—the buildings, the water, the pavement—had an indescribable glow to it. The palm trees especially made a great impression on me. . . . Let me tell you, to me when I came here the first time, I had a feeling that I had come to Paradise. First of all the palm trees. Where would I ever see a palm tree in my life? And the hotels were very beautiful. They still are.

[San Bernardino Oranges photo from Brooklyn Museum via Wiki Commons. Daniel Gabriel Rossetti painting of Persephone with the Pomegranate in public domain, from this site, with a hat tip to Cosmo Wenman for the reference. The model is Jane Burden Morris, the wife of William Morris, who is mentioned in the conclusion of my column. Man checking etrog for flaws by Flickr user  RonAlmog under Creative Commons license.]

Posted by Virginia Postrel on September 25, 2010 in Food And Drink