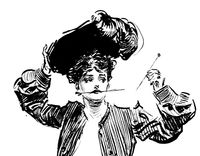 Although I love hats, I rarely wear them, partly because they're overly warm for Southern California and partly because when you need them most they have an annoying habit of blowing off. I always wondered what people did about sudden gusts in the days when hats were more common--especially at the turn of the 20th century, when women's hats were huge.  I always assumed that the answer lay, as this detail from a Charles Dana Gibson illustration suggests, in large hat pins that firmly attached the latest styles to the period's similarly oversized hairdos.

But it turns out the real answer lies in another characteristic of the Gibson Girl: her existence not in real life but in pen and ink. The styles of the past look graceful because we know them from glamorous still images, in which a perfect moment has been captured and refined.

As this video from 1903 shows, in the real past, people did what they do today: They grabbed their hats and held them down, sometimes without success. The past wasn't more graceful than the present. The flaws have just been edited out.

Posted by Virginia Postrel on July 01, 2013 in Fashion, History, Grace