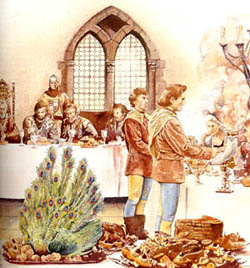 /bon vivant Charles Perry about the good old days, when peacock on the menu was the sure sign of a glamorous meal.  He's making his blog debut here.

What’s a luxury ingredient? Something there’s not much of, for starters. Ancient Roman epicures went for ingredients that required a lot of animals to be offed, such as larks’ tongues and sows’ wombs (which were stuffed like sausages). Black truffles have even more luxury value today than they had before WWI, because the fighting destroyed a lot of oak forests where the truffle flourished.

But human beings have small minds and mean to use them, so they have always counterfeited the expensive stuff. In medieval Baghdad, the ingredient that was always in short supply was marrow, so there were recipes on how to fake it if you didn’t have enough marrow bones for your party (here’s the secret: brains or spleen mixed with kidney fat, cooked together in a tube to give it the right shape). Today, we don’t care at all about marrow, unless we’re having osso buco.

In medieval Europe, the aristos claimed a monopoly on wild game and ferociously punished any ordinary person who poached one of the duke’s deer. So game acquired aristocratic connotations there, and European cookbooks still give recipes for pork dressed to mimic wild boar and imitation venison made from beef.

These days, particularly in areas without a long growing season, the great luxury ingredient is “fresh, local, organic” produce. Watch for it to be faked too. In John Brunner’s 1972 dystopic novel The Sheep Look Up

, the company with a monopoly on all the organic produce in the world is damningly discovered to be putting fake worm holes in fruits and vegetables so people will think they’re organic.

Real insect damage. That's going to be next truffles.

Perry left the LAT in May 2008, is working on his latest book, Partying Like It's 1399, and was interviewed by Superchef.