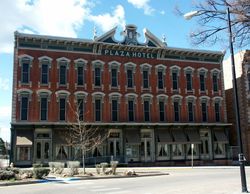 While traveling my wife and I often stay in historical hotels. In the late-19th and early-20th centuries some interesting hotels were built as stops on railroad lines, the kind of place where Harvey Girls or other uniformed staff served you. Resort spa hotels were often built near natural features such as hot springs.

Many of these hotels closed during the 1930s, 40s, and 50s. Some have been renovated and reopened. The mineral resources of the western United States have generated boom-and-bust cycles that continue to this day. For example, Las Vegas, New Mexico, was once a wealthy mining and railroad community which had several hotels. The Castañeda, a mission-style Harvey House hotel, is now a decaying giant whose vacant rooms sleep silently only a few steps from the train station (the hotel was used in the film Red Dawn). A picturesque city, Las Vegas has been used in many films, especially in the days of silent Westerns. In another part of town the 1881 Plaza Hotel still operates (we’ve stayed there, and it‘s shown in the photo). The Plaza Hotel was used in the film No Country for Old Men).

Many of these hotels were built in boom periods and were furnished resplendently. These hotels were places where presidents, congressmen, and railroad and mining barons stayed, as well as famous entertainers. In some hotels the rooms are named for the film stars or presidents who stayed in them.

The present-day condition of such hotels varies from abandoned shells to five-star splendor (an example of the latter is the Broadmoor in Colorado Springs). We recently stayed in a historic resort hotel whose grandeur had faded a bit (I’ll leave it unnamed). There were echoes of its former majesty, as well as signs that times had changed. There were no bellhops, for example, uniformed or not, to the disappointment of one elderly couple. And the decor was sometimes slightly off—the new carpet in the dining room clashed with the upholstery. 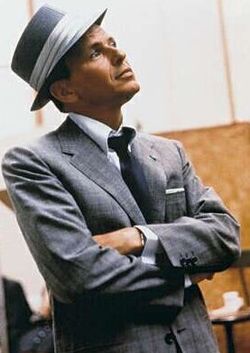 During our stay there I noticed that the music heard in the lobby and dining room was 1940s big-band music, and I pondered why it is that Frank Sinatra and Ella Fitzgerald and other singers of that era are so often heard as background music in upscale locations.

One reason might be language. When I phoned about a change in our reservation, I was told, “That won’t be no problem.” The double negative told me that some of the staff would be downscale. Perhaps the relatively urbane language of many big-band era song lyrics era helps hotels project some sense of sophistication. In contrast, the vernacular dialects used in many post-1950s lyrics might create a more commonplace ambiance. If you’re striving to create an elegant dining room experience, hearing Mick Jagger sing “I can’t get no satisfaction” might shift the diners’ moods in the wrong direction. (An even worse strategy would be Karaoke. We stopped to look at one beautiful old hotel, but there was an outdoor Karaoke event going on, which demolished the Victorian ambiance.)

In keeping with DeepGlamour’s recent hat party, I think hats have an oblique relevance. In the hotel where we were staying, when you looked at photographs of its glory days, you might notice that the guests in earlier decades frequently wore hats. And when you see photographs of singers like Frank Sinatra in his heyday, he is often wearing a hat and a tailored suit. Thus when patrons hear the music of that period, they think of a time in which many entertainers dressed with high-fashion elegance when they performed, and they are reminded of a time when high style was appreciated. In a 1996 interview, American-born fashion designer Tom Ford commented, “If I was ever going to become a good designer, I had to leave America. My own culture was inhibiting me. Too much style in America is tacky. It's looked down upon to be too stylish. Europeans, however, appreciate style....In fashion, you can really tell that America is descended from the Puritans.”

The only hat that I saw at the hotel was a baseball hat worn by an attractive, model-thin woman in a black, stretch tee and a great looking pair of khaki pants. The baseball hat created a fun look, though I couldn’t help thinking that a stylish fedora would have made her outfit look more hipster current. Then again, thinking of Tom Ford’s comments, perhaps she didn't want to look “too stylish.” Otherwise, the contrast between her appearance and her husband’s, who arrived a few moments later in trucker-like clothes, might have seemed comic—though probably not from her perspective.

[Photo of the Plaza Hotel used under the GNU Free Documentation License.] 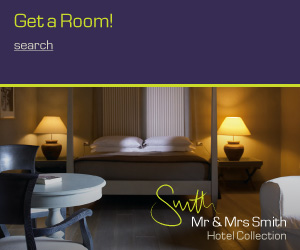