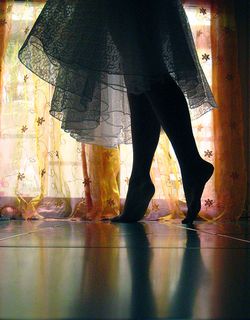 Virginia’s recent post contrasting the differences between “cute” and “glamorous” made several interesting comparisons. Her distinction between “innocent, ingenue” and “worldly, sophisticated” reminded me of a lyrical poem by Richard Wilbur

in which an experience of innocent beauty created an ecstatic moment for him. His poem, Piazza di Spagna, Early Morning, begins:

I can't forget
How she stood at the top of that long marble stair
Amazed, and then with a sleepy pirouette
Went dancing slowly down to the fountain-quieted square;

Nothing upon her face
But some impersonal loneliness,—not then a girl
But as it were a reverie of the place,
A called-for falling glide and whirl;

The poet witnesses a girl who, amazed by the Spanish steps in Rome, comes gliding and whirling down them, seemingly innocently unaware that she somehow completes the image of the place for the poet. Wilbur continues:

As when a leaf, petal, or thin chip
Is drawn to the falls of a pool and, circling a moment above it,
Rides on over the lip—
Perfectly beautiful, perfectly ignorant of it.

To create the lovely photograph shown at the beginning of this post, the photographer Matilde dressed herself in the kind of fairy skirt that so many young girls have played in, and she danced in her bare feet. The photograph has a wonderful feeling of innocence, but it is a portrayal of innocence created by a grown woman. 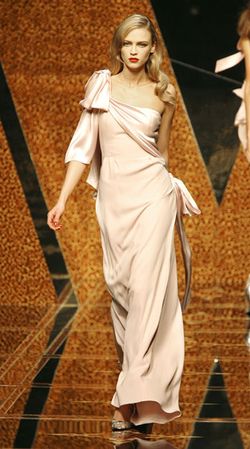 If we imagine a glamorous Italian woman descending those same stairs wearing a high-fashion gown such as the one shown here by Valentino, we assume that while she was descending she would remain perfectly aware that she was presenting herself as a beautiful, sophisticated woman.

And her awareness of her image, and the value that she knows that Western culture places on such fashionable glamour, is part of what makes her appear “dangerous,” to use Virginia’s term. She seems fully aware of the worth of her beauty and perfectly willing to use the status offered by her appearance and wealth to her full advantage.

The photograph of this gown (found on a Chinese economic site) is an illusion in that it was taken during a runway show, and the model may be wearing a gown that she herself could not afford to own. So this photograph is a portrayal of glamour designed to convince women who can afford Valentino’s gowns to purchase them. Nonetheless, I imagine this model feels glamorous while wearing this gown and walking the runway.

To see this model wear this gown and descend the Spanish steps would provide an impression as unforgettable as a girl innocently dancing down them. But where the girl presented an image of innocence, the model would present an image of glamorous worldliness.

[The photograph “As A Fairy” is copyrighted by Flickr user matilde, and is used by permission.]