James Bond Without The Glamour 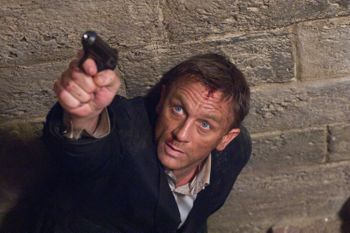 James Bond is an icon of glamour: sexy, good looking, utterly competent, effortlessly seductive, and equipped with the coolest cars and gadgets. Equally important, he is unflappable and self-contained. We see the glamorous Bond from the outside, projecting ourselves into his adventures without identifying with his emotional life. He makes his exploits look easy.

The new Bond movie Quantum of Solace, however, abandons the sprezzatura that has for so long been central to Bond's appeal. Bond is still competent and deadly, but he gets almost as banged up as John McClane, without McClane's esprit or wisecracks. He's not graceful or self-contained but damaged and emotional. The emotion is all the more problematic because it assumes the audience not only remembers plot details from Casino Royale

but is emotionally invested in them. (Bond films may be blockbusters, but they aren't exactly Star Wars, when it comes to fan involvement.) Plus the fight scenes and chases are so choppily edited you can't tell what's happening or, in many cases, who's who--thereby eliminating even the appeal of Bond's physical grace.  With a thin plot, even for a Bond movie, and a less-than-compelling villain, it wasn't surprising that the theater where I saw Quantum of Solace was only half full. The movie was entertaining, but it didn't deliver on the Bond brand promise.

Posted by Virginia Postrel on November 22, 2008 in Fashion