Back when I blogged at Fishbowl LA, I took the view that East Coast journalists usually failed when trying to cover show biz.

Mary Ann Akers, the Washington Post's The Sleuth (and boy! how the mighty have fallen if she's their crack investigative reporter, er, gossip blogger) gets all a-jitter over McCain's makeup artist, Tifanie White.

The make-up artist to the wannabe-stars is getting paid beaucoup bucks to make McCain, 72, more telegenic. 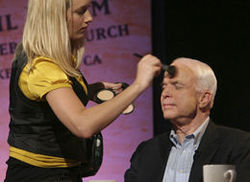 White got paid $8,672.55 in September to work on John McCain. White's got a big list of credits and an Emmy nomination. As a union makeup artist, her day rate is around $550 for a 10 hour day. Her pay's not even close to what a key artist, working on a feature film, could make. If that's beaucoup bucks, the Post is in worse shape than I thought.

Akers is really rather lame, as  so many others agree.