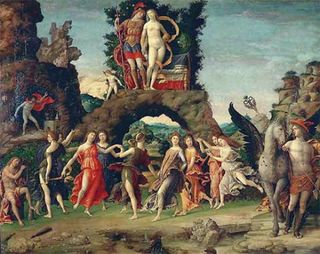 Muses are an ancient concept. For millennia creative artists have appealed to the Muses to grant them eloquence beyond their normal grasp. The nine mythological Greeks Muses are depicted dancing at left. Classical Greek writers typically began their longer works with an appeal to the muses for inspiration. In this vein Shakespeare, in the prologue of Henry V, has the chorus wish, “O for a Muse of fire, that would ascend The brightest heaven of invention….” The play that follows contains some of the most vibrant speeches ever written in the English language.

From our psychologically aware perspective we might quickly dismiss Shakespeare’s appeal for a “Muse of fire” as an Elizabethan conceit, a fanciful metaphor of no consequence. But perhaps the imaginative process of conjuring up fanciful imagery (a fiery Muse) can sometimes inspire creative artists to go beyond the boundaries of their “normal” imagination. And perhaps the magical power of muses to inspire comes in part from the power of images to spark our imagination.

The traditional nine Greek muses were all goddesses, and, as symbols of artistic fertility and grace, this seems logical. Real women have served as muses as well. Dante Alighieri met Beatrice Portinari when he was nine. He fell instantly in love, and she became his muse for the rest of his life. Dante was obliged by parental contract to marry another woman, and when Beatrice died at age 24, much of Dante’s later work was inspired by and dedicated to the memory of Beatrice. Hector Berlioz was twelve when he met eighteen-year-old Estelle Dubeuf, and he was so smitten with her that she became a life-long ideal to him. In each case a relationship existed with the muse, but the romantic relationship the artist desired was only possible as an act of imagination. 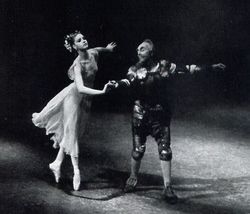 Choreographer George Balanchine was noted for finding his muses in flesh-and-blood ballerinas, and he married a number of them. But when he fixated on Suzanne Farrell, there was an age gap of more than 40 years. He created some of his greatest roles for her, and though she was happy to dance them, she resisted his desire to marry her. The relationship between them seems symbolized by his choreographing of Don Quixote. He cast Farrell as Dulcinea and himself as Don Quixote, as seen in this photograph.

Terpsichore was the Greek muse of dance, and this personification seems more apt and inspiring to me than an abstract noun like “Dance.” “Dance” seems inadequate, too generic, to represent the in-the-flesh experience we might have watching a physically beautiful person dance. “Terpsichore” seems closer to creating a image that symbolizes a thrill that touches both mind and body. Real-world sensuous beauty can trigger a frisson of excitement that is unforgettable, as expressed in these lines by poet Wallace Stevens:

Beauty is momentary in the mind—
The fitful tracing of a portal;—
But in the flesh it is immortal.

Stunned by encountering real-world beauty that must for some reason always remain beyond their grasp, artists sometimes respond by making their desire incarnate in their art form. And—as with Dante’s poetry, Berlioz’s music, and Balanchine’s choreography—when that desire is masterfully fashioned into an integral aspect of a sensible form, the resulting art can itself inspire a sense of awe, magic and glamour.

[The Italian Renaissance painting of Parnassus which shows the Muses dancing is by Andrea Mantegna.]