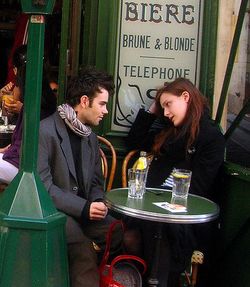 The couple at left have turned to face each other. This small detail is actually part of a pattern of cues that reveals that this couple has formed or is in the process of trying to form a relationship.

A few nights ago I observed a mother and father taking their college-age daughter out to dinner. (The mother and daughter had identical noses.) Also at the table was another young woman, perhaps the daughter’s roommate. After observing them briefly, I told my wife that I suspected the two young women might be more than roommates. Just as my wife glanced over, the two young women seemed to casually decide to compare hand sizes, but the particular way they touched their fingertips together certainly looked like a gesture of affection. My wife thought so, and the mother studied that gesture closely. The father seemed oblivious.

We remain, inescapably, biological creatures. We take in some information through our senses that we process unconsciously. A recent article in Psychology Today discusses some studies which support the “leaky cues hypothesis” that a woman would find it difficult to fully conceal all signs that she is currently fertile. Simply smelling a T-shirt recently worn by a woman in estrus caused a spike in men’s testosterone levels. A study done of lap dancers revealed that they earned almost twice as much in tips while in estrus. There are also subtle changes to a woman’s voice, face, and figure during her fertile days. Subjects shown photographs of the same woman taken over the course of a month pick the photo taken during her fertile period as the most attractive. The article also discusses subtle changes to women’s behavior during their menstrual cycle, including what type of men they may find most attractive.

Interactive visual cues, like the one I described between the roommates, can be studied by observation. In Sex Signals: The Biology of Love

, biologist Timothy Perper published research based on thousands of hours spent observing interactions between men and women in places like bars and dance halls. His observation teams discovered that women used predictable patterns of visual and tactile cues to signal a man that they would be receptive to his attention. These “contact-ready” cues were so subtle most men weren’t consciously aware of receiving them, even when they responded to them.

Perper’s research found that about 90% of women were aware that women sent such cues and could spot other women giving them, whereas only about 5 to 10% of men were consciously aware of them. To eliminate gender bias in their observations, Perper’s observers worked in teams of one man and one woman. Perper discovered that some men could not be trained to be attentive observers because they would avoid seeing women do anything that challenged the common belief that men initiate most male/female relationships. These reluctant trainees would manage to glance away at just at the moment a woman sent a subtle cue—such as touching the clothing that the man was wearing, a gesture that other teams had observed was a cue that she would accept a reciprocal touch.

Perper notes that a woman sends such cues with the unstated provision that at any point she can indicate that she is no longer interested in the man’s attention. He is then expected to withdraw (which most men seemed to understand and respect, even though a few became unwelcomely persistent). The research teams observed something similar in the pattern of male responses. When a woman began to give a man a pattern of cues, they discovered that even if he showed initial interest, if at any later point he failed to make an appropriate reciprocal response to her cue, she might as well give up on him. For example, the turn to face the other person (illustrated by the first photo) is usually initiated by the woman, and he is expected to turn toward her in response. If he doesn’t, any further efforts to engage his attention will usually fail.

Much human behavior goes unnoticed. In his book Stein On Writing

, Sol Stein recounts a lesson in observation he received from playwright Thorton Wilder:

He [Wilder] took me to watch a country square dance from an unoccupied balcony in a recreation hall, and pointed out things that writers are supposed to see. The New Hampshire folk came to dances in families—mothers, fathers, and adolescent children. As we watched from the balcony, Wilder pointed out the barely noticeable sexual interplay between fathers and daughters and mothers and sons as they danced the evening away....Wilder taught me that what a writer deals with is the unspoken, what people see or sense in silence. 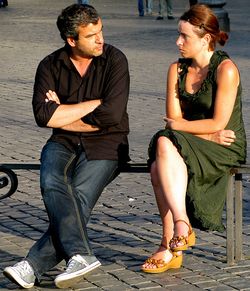 After reading Perper’s book I decided to train myself to be more observant. I read some other books on non-verbal communication (sometimes called “non-verbal leakage”), and thereafter people watching became endlessly fascinating. In restaurants I could spot a couple across the room having a quiet disagreement from cues in their body language, such as crossing their arms in front of them. At a sidewalk cafe I was amused to watch a poised, sophisticated woman deftly use body language to seem to defer to her less poised male companion about where to eat. In a casual restaurant I became deeply uncomfortable watching a teenage daughter in short shorts stand next to her father’s chair so that he could rub the back of her upper thigh, unseen by his wife sitting across from them.

Occasionally Perper’s observation teams were perplexed by what they saw. If so, and the opportunity presented itself, they might introduce themselves and ask. Seeing a group of women and a man have lunch, one team thought they were picking up signals between the man and one of the women, but weren’t sure. The woman whose signals perplexed them lingered after lunch, and they approached her, explained their research, and asked her about the situation. She laughed and told them that she was having an affair with the man, who was married, and they were trying to keep it secret. It obviously becomes harder to keep relationships secret from people trained to notice small details of interaction.

Some adeptness in reading non-verbal cues is unquestionable useful, and numerous commentators and educators have expressed concern that Generation-Y seems even less adept at it than their elders. Many commentators suggest that a fascination with the wonders of internet social networking has meant that many teenagers are failing to gain enough experience learning to read the information conveyed by subtle facial and body cues. Some people feel they are also less adept at managing their their own non-verbal information. For example, some teachers report that many of their current students are less able to look them in the eye, and often seem less skillful at face-to-face lying. In some face-to-face business and interpersonal situations, it can be important to mask non-verbal leakage. Being too easy to read can sometimes reveal more to others than you intend, and place you at a disadvantage.

Addendum: 1/1/2011. In response to a request, I’ve listed a few books on relevant topics in the comments.

[Yes or No? photo by malias. Disagreement photo by Ed Yourdon. Both are use under the Flickr Creative Commons License.]

Posted by Randall Shinn on December 29, 2010 in Psychology, Sex